7 ways my miscarriage made me a better mom

Published by Shelly Mazzanoble on February 11, 2020

Two months after turning 40, my husband and I “pulled the goalie.” Approximately 15 days later, I was pregnant.

“This guy,” my husband said, thumbs pointing at his chest.

What had we done? I thought for sure we’d have at least six months to get used to the idea of starting a family. Truthfully, I wasn’t even 100% sold on being a mom. (But can I get a woop-woop for my 40-year old uterus?)

Then one day, as I was checking out area rugs at The Land of Nod, I felt a tug in my gut. Was that an adverse reaction to paisley? Might a shag be better? Probably expectant mother nerves, I thought. The next morning I went about my usual routine. As I turned to flush, something caught my eye. Five hours in waiting rooms and one ultrasound later, the radiologist confirmed what I already knew.

“There is usually a reason why these things happen,” he said. “The fetus was likely not viable.”

I get it. He sees these things happen all the time and having to tell excited parents-to-be their fetus isn’t viable can’t be easy. But that was my fetus, bud. Was. Ugh.

Two months later I was pregnant again. While I wouldn’t wish a miscarriage on anyone, having experienced one taught me lessons that make me a better mom.

I chilled out: You know how drunk people seldom hurt themselves falling off barstools because they’re all loose and relaxed? With the exception of the whole drinking thing, that’s the approach I took with my second pregnancy.

The first pregnancy, I bought 5,958 books, DVDs, and healthy drugs guaranteed to turn my placenta into Canyon Ranch Day Spa. I gobbled all the vitamins, got at least eight hours of sleep, wore sensible shoes, and spent the future child’s college tuition at Whole Foods. That child-to-be ate cleaner than Gwyneth Paltrow on a colon cleanse.

The night my second pregnancy was confirmed, I celebrated by devouring a wheel of brie and seventeen pounds of raw cookie dough. Yeah, I know, unpasteurized cheese and raw eggs aren’t great for anyone let alone someone of advanced maternal age with a history of miscarriage, but I was too scared to get attached… It was like I was daring this fetus to stick around. Also, I’m a stress eater.

I’m not suggesting a diet of cigarettes and ignorance, but there is something to this laissez-faire approach. I already knew what could go wrong. Been there, survived that. Instead of focusing on how much folic acid was coursing through my veins, I focused on just being pregnant. And you know what? It was amazing. Every stretchmark, every pound, every zit. All of it—amazing. Besides, if you took the infant CPR class then you know shit doesn’t get real until after the baby is born.

I know that nice things are overrated: My husband and I scored a beautiful leather sectional at an expensive furniture store’s outlet. A couch that spectacular deserved nice throw pillows. Of course our old coffee table had to be replaced too.

Today the coffee table has been converted to a train table, the throw pillows fell victim to a stomach bug that also took out an area rug and eight pairs of pajamas, and the couch has suffered so many dairy spills it smells like rotting goat. So yeah, no Dwell editors will be knocking on my door anytime soon, but we’re aces at hosting playdates.

I say yes: Sometimes Mommy just wants a glass of wine and an evening with "The Bachelor." But noooo. Mommy eats Pirate’s Booty for dinner and watches Thomas the Train cause confusion and delay. (What is with those guys, anyway? Their job is to be trains. Just pull your load and get it done!)

My 32-pound toddler wants to “climb up Mommy” when I’m schlepping seven bags filled with organic vegetables and free-range frozen chicken nuggets shaped like dinosaurs soon-to-be mashed into the couch cushions. I fetch him at 5:45 a.m. because he wants to play “tunnel” in our bed and won’t quit calling for me until he’s under our covers. Even though we only need paper towels, I will pull a hamstring maneuvering a shopping cart slightly larger than a Volkswagen Beetle around the grocery store because my son loves jumping out of the toy car window Dukes of Hazard-style and incessantly beep the horn. (No idea where he gets that from.)

One day he won’t fit into my lap or call for me to dry him when he gets out of the bath. (Probably a good thing.) My sweet little boy with the booming toddler laugh and weird obsession with pretending to fall down in public will one day become a surly teen who would rather lay face-first on a couch that smells like rotting goat than hang out with him mom. So yeah, for now, he gets a ‘yes’ because he’s here.

I chose the right guy: A hysterical pregnancy is when a person exhibits all the symptoms of pregnancy without the actual fetus. A hysterical miscarriage happens when a husband has no idea how to deal with his wife’s miscarriage.

After devouring a pint of kale and quinoa salad in the days soon after, my husband claimed he had food poisoning.

“Oh God,” he wailed, rolling on the bed. “My stomach hurts so bad!”

“Are you kidding me?” I shouted. I wanted to smack him with a Poise pad.

This went on for two days before we finally realized the kale wasn’t the issue — his guilt was. My husband felt selfish mourning our loss because I was the one experiencing the physical symptoms. He didn’t know how to help so he manifested his own sympathetic stomachache.

Oddly it did make me feel better. What can I say? Misery does love company, but most importantly, it strengthened our partnership. We were in this together. Also, it provided some much needed levity. What the hell would he do when his water broke?

I know my body kicks ass: Did my uterus absorb some of my ambivalence toward motherhood and therefore provide a hostile environment? Was I cocky about getting knocked up on the first try? Did the joint I smoked when I was 14 cause irreparable damage to my developing reproductive organs? I interrogated every cell in my being trying to find a reason.

And then it occurred to me. My body was perfectly fine. It worked exactly the way it was meant to. Not to sound dismissive, but this is biology. In most cases a miscarriage is the result of a fundamental developmental problem. So lay off the 14-year-old you. She has enough issues with that perm and unibrow.

I found my people: With the exception of Brooke on "The Bold and the Beautiful," I didn’t know anyone who had a miscarriage. Or so I believed. As I started opening up, I discovered how alarmingly common miscarriages are. Some of my closest friends had multiple.

Talking to other moms didn’t just bring us closer, it built my maternal confidence. Whatever I was going through, they were too. No judgment or shame or pity. We comfort and commiserate. We keep our neighborhood wine bar in business. It takes a village to peel you off your sofa and love you even when you smell like a farm animal.

I learned to prioritize: Yes, the dishwasher needs emptying, bills need paying, lunch needs prepping, but that can wait. Right now Elmo wants us to move our body to the ABCs and my son wants to dance with me.

I will be late for a Weight Watchers meeting because we’re reading "Nobunny’s Perfect"—again. The drycleaner can keep the comforter another week because we’re spending Saturday at the park tossing Matchbox cars down the curly slide. And I will stay up way past my bedtime catching up on "The Bachelor" and the chores I blew off when my son was awake. I will do it because I am 100% sold on being a mom. I guess the fetus was viable after all. 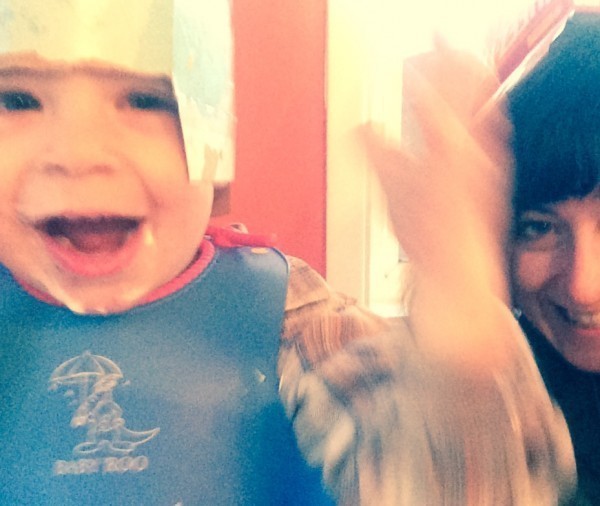