A NICU Journey That Led to a NICU Charity 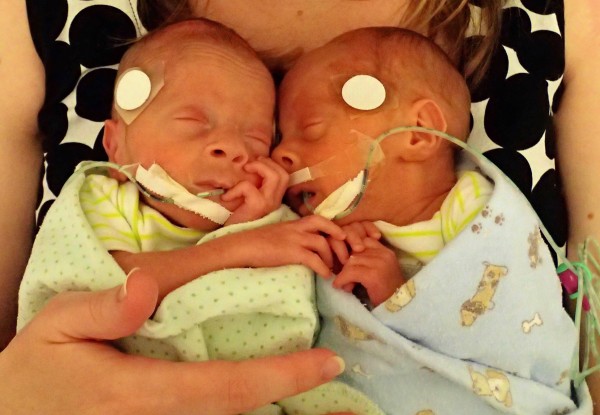 My pregnancy with my twins was fairly easy, until they decided they wanted to meet us early. Although the doctors tried their best to stop my early labor, my sons were born at 27 weeks and weighed 2.3 pounds each. These were my first kids, and I was not prepared for what was to come.

I remember seeing them for the first time in their isolettes and thinking how wrong this was; this was not how things were supposed to go. The boys were hooked up to several different machines and had wires everywhere. They were so tiny. Their skin was thin and red. Their chests severely retracted as they struggled to breathe. Their little cries sounded like a baby bird trying to chirp. The first time I held them, it felt like I was holding nothing at all; they were so incredibly light.

When the boys were 2 weeks old, we got the call that every NICU parent dreads. One of our boys wasn't breathing well and needed heart surgery. Watching my tiny baby being wheeled off for surgery was the hardest day of my life. Even his twin brother sensed that something was wrong and cried until he came back. The surgery was a success, thank God.

About 2 months later, both boys had surgery to repair hernias. That was our last major hurdle before the boys could come home.

The boys spent 3 long months in the NICU. Although my boys are 3 years old now, I will never forget the sounds of the NICU; the nurses' footsteps with their soft-soled shoes, the constant beeping of the monitors, the soft cries of babies. They haunt me and fill me with gratitude at the same time.

My NICU journey inspired me to start a charity, called Sharing Hands for Tiny Hearts, that benefits families with babies in the NICU. No matter how short or long your journey is in the NICU, you still have a baby in need of major medical care. No one plans on that, and it is very difficult. I started my charity to help make the journey a little easier. If you'd like to learn more, please check out my Facebook page: https://www.facebook.com/SharingHandsForTinyHearts/.

Although my NICU journey is over, there will (sadly) always be parents with babies in the NICU in need of help and support.

My little fighters. My heroes.
Longest Journey
I wasn't prepared...