One day a friend posted a picture of her three dogs and explained that she was moving and had to find new homes for two of the family pets. She was getting a divorce and her husband would keep only one of the dogs. The two that were left were a male full-breed boxer and a female mixed-breed part boxer. There were about twenty people who immediately commented that they would take the male boxer but nobody wanted the female.

The dogs were four years old and had been raised together. The thought of them being separated broke my heart. My kids, husband, and I had wanted a dog, but not two. I talked to my husband and he felt the same as I did and said, "let's take them both." I was really shocked he offered this and so I posted that I would take them both. I feared that she would just tell me to take the female and give the boxer to another friend.

I was really happy when she made the decision to keep them together and let us have both. We made the three-hour drive to their house and picked up the dogs. It didn't even take a day to realize how much these dogs love each other. They would rather share the same bed, than be apart. They spoon constantly. I must have 100 pictures posted of them spooning.

It has been eight years now. They are both getting old and grey. We have endured so much to keep them together. Last year when we sold our house, we had a place lined up to live temporarily while our new house was being built. The day we were supposed to move in we were told no dogs allowed. We couldn't find a home last minute that would take us with dogs so we were forced to live in our camper. It was a rough 5 months! Now we live in a place that doesn't have a yard so we take the dogs out for walks every 2-3 hours. That has been a huge inconvenience, but the dogs love it.

One thing I noticed when we started packing up our home and moving things is that the female dogs started getting really anxious. She would stay by my side as I walked all over the house moving boxes, up and down the stairs. I truly believe she was worried we would move and leave her behind. Now that we are in our new home, when ever she sees me cleaning and moving things around the house, she gets anxious and clingy. It is very clear that she has been traumatized by being left by her family.

Our pets are our family members. They love us unconditionally and once we choose to bring them into our lives we need keep them in our lives no matter how inconvenient. Nothing about having kids is convenient but the love is worth it! 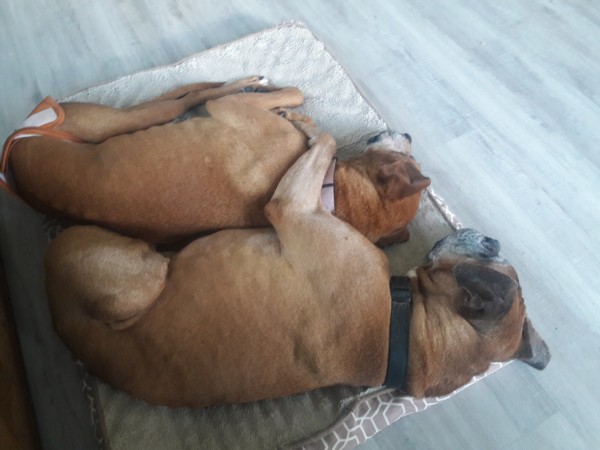