Born prematurely at 26 weeks and weighing just 960g and 1030g respectively, Vincent and Victor were in King Edward Memorial Hospital’s neonatal intensive care unit for the first 111 days of their lives, relying on breathing support, blood transfusions, surgery and countless medical procedures to get them healthy enough to go home to Coogee.

Now 17 months old, the twins are doing well and reaching all of their milestones, something Mr Jacniacki said he and wife Victoria were forever thankful for after months of fear that they would lose their miracle babies.

“Not many people will know that we struggled to conceive for a long time; years had passed and we started to lose all our hope that we would ever become parents, then the miracle happened,” he said.

“(The premature birth) took us completely by surprise; we were having a relaxing Sunday watching a movie then next thing bleeding, ambulance, hospital and a lot of stress.

“I was very scared for all three of them but I couldn’t show any weakness, I had to be strong for my family, be their rock.”

The twins’ fight might be over but Mr Jacniacki’s is just beginning as he prepares for the Fight Like a Premmie boxing event at Crown Pyramid in November.

He said he was eager to use the event to raise as much money as possible for other families going through the same experience.

“Premmies are the smallest of humans but the biggest fighters,” he said.

“I will dedicate the event to a loving memory of three tiny sparks Leo, Charlie and Eddy and their parents and our friends Lucy and Michael and all the families that had to say goodbye to their tiny miracles because they arrived ‘too little too soon’.”

Funds raised during Fight Like a Premmie will be donated to Tiny Sparks WA and the Women and Infants Research Foundation.

The event is on at the Crown Pyramid on November 17. 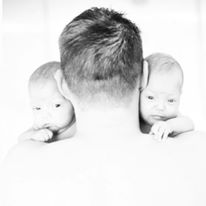 Do You Believe in Miracles?
Miracle Identical Twin Preemies
Little Warriors: The Fight for Life
advertisement

Do You Believe in Miracles?
Miracle Identical Twin Preemies
Little Warriors: The Fight for Life