For the mom who feels "stuck," and can't find her "chill" 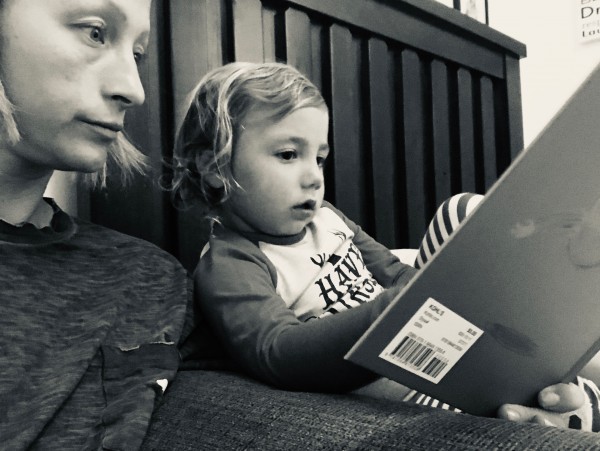 That was the title of the story I read to my three-year-old last night.

Per usual, she was the book-picker, and I can't help but wonder if her hardcover choice was entirely random or if it was some whisper-style message from the universe intended to directly reach me via the little tyke in my lap.

In the kid's novel, there's a boy, and he gets his kite stuck in a tree.

What precedes this unfortunate happening are the little dude's numerous failed attempts at getting the kite unstuck.

Each of his many efforts, surprisingly, and then as the story goes on, not so surprisingly, result in the tree taking on many other "stuck" items.

As I was reading to her, I kind of drifted off into my own world.

This happens a lot -- and it's undoubtedly a bad habit -- but it's like I'm there with her, and I'm speaking the words which I see on the page, but I'm not truly present, fully comprehending what I'm reading or sometimes not even delivering the story accurately.

Last night, however, was slightly different.

I wasn't as much tuning out from what I was reading, but rather quite the opposite, as I was uber-tuned into what I was taking away from the story as it's "bigger picture" and how it related to me and my life.

So, I'll share with you the place in my overthinking, overanalyzing, anxious, creative, but semi-scrambled head that I went to during that twenty minutes of storytime.

As soon as we started the book, I began to think,

This boy is me.

But, it's not my kite or my belongings that are stuck.

I'm stuck in these semi-sh*tty patterns of attitude and behavior, and I can't get unstuck."

What I'm talking about?

My periodic, but present-far-too-often lack of gratefulness for my many blessings, both living and non-living.

My struggle with impatience -- with strangers, acquaintances, friends, family, and mainly, my children, spouse, and certain situations.

My impulsive and sometimes ugly reactiveness.

My need for control.

My despair when I don't have control.

My anxiety when I feel like my kids, or I am out of control.

And, as you can imagine, the list goes on.

Honestly, this was some serious and much-needed introspection via evening book time, and though the process was unexpected, the outcome was positive, not really painful and admittedly necessary.

As parents, especially mothers, we usually like routine; some semblance of one or at minimum, the appearance of one.

Both kids and their grown-up counterparts become accustomed to patterns of behavior, come to expect such and act accordingly.

So, on the days when something (anything) "throw us off," we jump ship like it's our job to our go-to, poor responses because they are comfortable and when shiitake is making us uncomfortable, we seek solace in what we know even if such means resorting to substandard and lousy parenting (like yelling at your child) or self-deprecation (out loud or internal negative self-talk).

Yesterday was one of those days that left me feeling like I stunk as a mom, but I kept on stinking.

Without a clear cause, I felt very crabby, and my kids were on the receiving end of my discontentedness, which displayed itself by way of moodiness and outward expressions of irritation.

I was less than fun (and that's being kind), and I couldn't seem to find my "chill."

Here's what I really think -- that I used up all that chill last week, allowing for other tasks like housecleaning and writing work to slip by the wayside.

And, as a result, I was feeling behind on those responsibilities and frustrated with my three, two-legged priorities who distracted me from such by asking me to do things like (gasp) read to and with them.

How dare they, right?

Still, as we kept reading, here's what happened:

At the end of the boy's story, he made one last ditch effort at retrieving his kite by sticking to his same pattern of behavior -- the same action that didn't work the first gagillion times -- and though it didn't happen as he intended, his kite did eventually fall and return to him and he was delighted.

The story was intended to be humorous.

Who in their right mind keeps acting in a certain way, and doing something that is clearly NOT WORKING?

Maybe you do that?

Because -- and I'm making a general assumption here -- as parents, I think we all do that and, honestly, probably pretty often.

We do specific things and resort to certain attitudes and behaviors because they have become so normalized for us; so habitual.

We relish in our now returned feeling of ease and joy until we become stuck once again.

Whether your kids are old or young, developmentally "on track" or own their own unique track, whether you are happily married, divorced, widowed or co-parenting, whether you helicopter it up or align more with those who opt to "free range," we all feel stuck at times.

But, do you know what?

I don't think that "being stuck" is such a horrible thing.

I think that, more often than not, when we are stuck on a less than favorable mode of operating, there's a reason for it, and we need the time stuck in that mental place to figure out what caused it, what we can/are learning from it, and then work our way out of it.

It's through these hourly, daily, weekly, or monthly mini-failures and triumphs that we learn more about (and become more in tune with) ourselves which open us up to transforming into someone who becomes "stuck" a little less often.

Remember how I mentioned that yesterday, I was seemingly cemented in a funk?

Today, I was unstuck, and I can't explain how that came to happen, except that sometimes you have to -- killer wisdom here guys -- go through things to get through them (yes that is the best way I can explain it) and benefit from them.

Whatever has you feeling stuck this week -- your thoughts or behaviors --and whatever it relates to -- your marriage, parenting or work -- give yourself a small break by accepting your current situation, forgive yourself for the mistakes you are continuously making, be proud of yourself for showing up and trash any pressure to become unstuck.

Well, because precisely what will happen when you release the terrible feeling of constraint and duress and replace it with acceptance, is that you will no longer feel stuck and then, BOOM, you won't be anymore.

Until next time that is, but that's okay because now you know how to handle being stuck.

It was the title of the story I read to my three-year-old last night, and though it is what I feel often, I no longer think it's such a bad thing.

Mommy Blogger Claps Back at Criticism of Her Circa 2006 Pencil-Thin Eyebrows
‘I could barely speak’: Grieving woman struck by coffee barista’s ‘simple act of kindness’
Back Off Envy: I'm Bigger and Stronger Than You
advertisement

Mommy Blogger Claps Back at Criticism of Her Circa 2006 Pencil-Thin Eyebrows
‘I could barely speak’: Grieving woman struck by coffee barista’s ‘simple act of kindness’
Back Off Envy: I'm Bigger and Stronger Than You