Friends Are Made On The Backs of Each Other

In the course of your life, there are certain moments that you remember as clearly as if they happened yesterday. Some are big moments, but most of them are small. Four years ago, at UVA Basketball Camp, was one of those moments for my son Jack. And for me.

But not for the reason you think.

Despite his most fervent desire, the idea that Jack would even be able to attend a college basketball camp was a stretch at best because of a rare genetic disease no one has heard of (for more read here). But this one – 2 half days with parents in attendance – seemed like the best shot we’d ever have to give him this dream of playing with his beloved Wahoos. Way too often in my younger life, I preemptively said no to things that I suspected I couldn’t do. And that was the safe thing to be sure.

But my children want to try. Everything. And I love that about them. I love that they don’t view every door as closed. Instead, they see the light coming through the keyhole.

There’s such a fine line between wanting to protect your children from pain and letting them live their dreams. That day, we let Jack live his dream.

And he did. The entire UVA Coaching staff and his favorite players were running camp. He shot baskets with Malcolm Brogdon and Sean Singletary and Justin Anderson. He got a pat on the head from Coach Tony Bennett himself.

But as I suspected, by 10:30, he was limping badly. He came over to me and we tried a couple of tricks I had up my sleeve but it became clear that my efforts were just postponing the inevitable. I tentatively approached the coaching staff to explain why Jack needed to sit out, desperately wanting them to know Jack’s blisters were different. That he wasn’t being lazy or undisciplined. That he was fighting through pain that is difficult to comprehend.

I held my breath, because with 60 other kids and a professional camp to run, I expected them to not really care. Or just smile, put him on the bench and forget about him. And I wouldn't have blamed them.

But the most magical thing happened.

Over the course of those two days, Coach Ron Sanchez brought the trainers over and got him bags of ice and sat with me. He got an industrial fan to blow cold air over Jack’s feet. Coach Ritchie McKay and Coach Jason Williford sat down and asked him questions about his blisters. They asked asked him to be an assistant coach for one game and run the scorer’s table for another. Ron gave him a piggyback ride to lunch so he could “be with the fellas.” 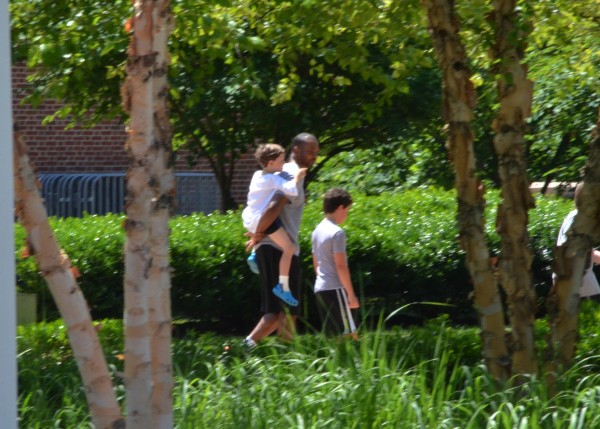 The players who were helping to run the camp sat next to him when he couldn’t play and kept him company. They held their breath and rushed over when he crashed to the ground and hurt his blisters. They cheered him on and high-fived him as he got up, with tears streaming down his face and ran down the court. They hugged him and told him he was a joy to coach and asked us to come back to watch practice in the fall and meet the other players. They made us part of their family.

I looked at Coach Ron with tears in my eyes and tried to convey to him just how much their genuine compassion and love meant to me. To Jack. And he smiled at me and said “Aw Cameron, you know. That’s just who we are.”

At the end of the camp on the second day, the coaches gave one award. It wasn't for the most talented player or the hardest working or the most sportsmanlike. It was for Passion, one of Tony’s Five Pillars.

And it went to Jack. 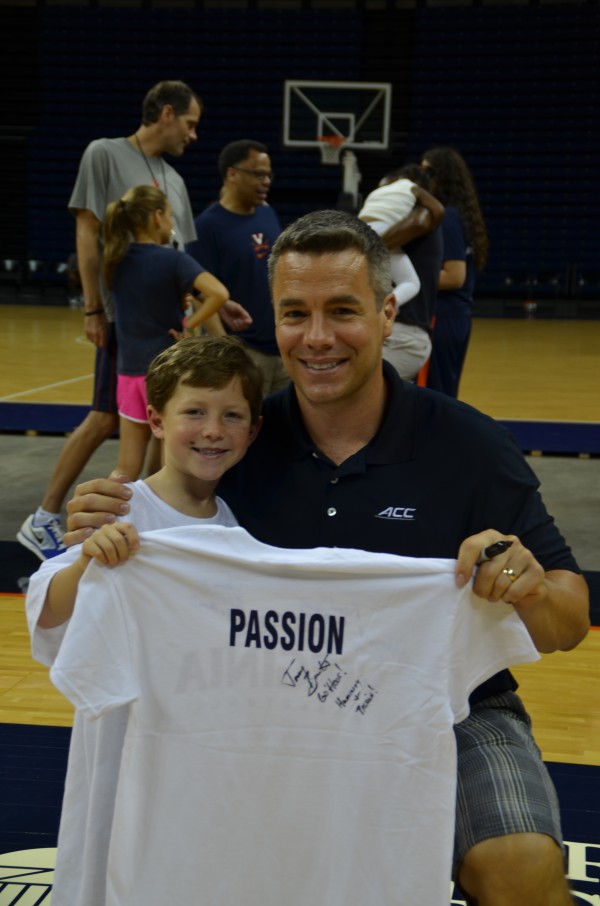 Jack might have won the award for passion, but please let me tell you that these coaches, this team, this program – they win the award for Tony Bennett's other 4 Pillars: unity, humility, servanthood, and thankfulness.

I watched Jack be brave enough to live his dream that weekend, even if it didn’t turn out the way he expected. All because these men cared.

Not because it was their job.

Not because cameras were rolling.

It’s just who they are.

Two weeks later, my dad died suddenly. The team that had filled our hearts with love became the conduit through which we grieved. They gave us their court to celebrate our own victories, to grieve our own losses and to make our own readjustments. Amid the raucous screams and electric atmosphere of John Paul Jones Arena, covered with popcorn remnants and sticky substances that I can only hope were spilled drinks, we found peace. They gave my boys heroes to look up to, not because of what they did but because of who they are. Mostly, though, they gave us lifelong friends.

Fans may be born on the laps of their parents, but friends, well, friends are made on the backs of each other. 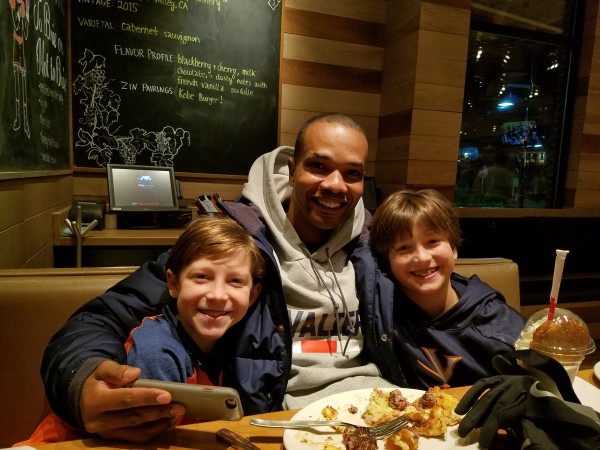 I know most people think it's crazy to have season tickets to a basketball team that plays 150 miles away, mostly on weeknights. But it's more than a game to us. It's family.

Yes, there is a lot that is wrong with sports these days. But not in Hooville my friends. These men are everything that is right with the world. These men love big and they love hard.

Join Cameron on her blog Lucky Orange Pants and on Facebook where she writes about how to love hard, even when it's hard.

Cameron Reeves Poynter is a reformed attorney, a mother of two boys, and a rabid sports fan. You can find her work on Scary Mommy, Her View From Home, Yahoo Parenting, The Mighty, Club Mid, The Good Mother Project, and on her own blog Lucky Orange Pants.