His rainbow baby cries brought the color back to my life

The term "Rainbow Baby" was foreign to me until I sat in the aftershocks of our first miscarriage.

It's a phrase used to celebrate the babies born after pregnancy loss. The babies who didn't replace those we we never got to hold, but put together the pieces of our hearts in a way we didn't know possible.

When pregnant with my Rainbow Baby, every approaching doctor's appointment filled me with dread. I would only feel okay once the doctor found his heartbeat and the gentle drumming told me he was still there. The feeling of comfort would last for a couple days before the anxiety kicked in again.

Most nights I would awake with a start at 2am with a hand on my belly, waiting for the kicks. I would lie there in the dark waiting and counting, knowing that sleep wouldn't come until we hit our target together.

The nursery was ready, the clothes were folded, and the car seat was installed. But after three miscarriages, I couldn't let myself be totally confident that someday in the near future I would be bringing home my baby. 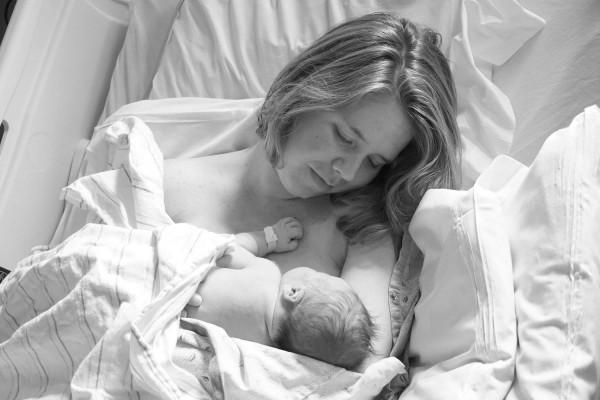 Then he was born.

I cried because he was actually here.

He was mine to hold.

We counted his fingers and toes and touched his scrunched up nose promising to love him forever.

There have been plenty of tears since. His and mine.

I am thankful for them all, because I know all to well what my life would be like without him.

And I know all too well that the tears I shed before him left a mark so deep that I'll never be the same.

But those first cries. The cries of my Rainbow Baby. They were a gift I can't adequately describe except to say they brought the color back to my life.

Which makes a lot of sense really.

Becca Carnahan is a career coach, author, and mom from Massachusetts. Her writing combines relatable parenting humor with career development tips to make the process of finding or creating a job you love fun! Signup for her weekly working mom newsletter sharing funny stories, memes, and career tips at withlovebecca.com.

He Won't Break
His name was Lochlan Michael, he was born November 20th 2015.
Rigby is Our King and My Hero
advertisement

He Won't Break
His name was Lochlan Michael, he was born November 20th 2015.
Rigby is Our King and My Hero