How "Mamma Mia 2" Took Me Back to Mom School

At first, it was just hard to believe that my babies actually belonged to me. Now it’s so hard to remember that they don’t.

The baby was just hours old, but he was a marvel and a miracle, all wrapped up in a striped cotton blanket. In the rare moments that he opened his impossibly dark newborn eyes to the world, he must have seen, staring back at him, the chubby, youthful faces of his parents, squinting in an expression equal parts adoration, pride, and terror. It’s no wonder that he so often scrunched them closed again, knotting his impossibly furrowed newborn brow against his unfortunate lot.

There in the hospital room on his first day of life, we stared at him so long, in fact, that it was my mom who gently suggested that he might benefit from a diaper change. His father and I stared at her blankly with expressions that must have been like the ones I have since seen on my children’s faces in times of great stress and uncertainty, moments of transparency in which their whole lives flash across their eyes, revealing the toddler caught red-handed, the teenager uttering an untruth, the young adult feigning assuredness. “Um, the nurses do that,” one of us said without a hint of irony. The other added solemnly: “I don’t think we’re allowed.”

It was so hard to believe, at first, that the babies really belonged to you, and not someone else - like the nursery nurses for example, who had received the requisite training, who would know how to do the job. But necessity being the mother of invention, and motherhood being the original inventor of necessity, it was you who brought the baby home, you who did everything wrong a whole bunch of times, and cried a whole bunch of times too, both because the baby did, for better or for worse, belong to you. And because you adored this little one so much already, and because you wanted the very best for them, you just kept trying, struggling to be good enough, all the while wondering if there wasn't someone better for the job.

And this went on for many years, the trying and the belonging, the better and the worse, in sickness and in health, in good times and the bad. The good times were when a friendly stranger approached, smiling broadly while asking in sweet tones if you were the mother of your child’s name, and you smiled back and awaited the glowing news. The bad times were, for a while, when another mother approached you angrily at the playground - where you were mercifully enjoying the triumvirate of being dressed, out of the house, and engaged in adult conversation, and so maybe were not watching as closely as you might have been - to ask, with her finger wagging, if you were that child’s mother. But then the children got older, and the bad times became an unfamiliar voice on the phone, in the middle of the night, from a number you did not recognize, asking gravely if you were the parent of your child’s name. But the answer was always the same: Yes. No matter what you wished the answer was at that moment, what the consequence of this admission might be. “Yes,” you said, because you knew it to be true. “The child belongs to me.”

Earlier this week, I saw Mamma Mia 2 earlier this week with my now-silver-haired husband, my grown-up daughters. The sequel is almost never as good as the first movie, and I didn't know as many of the songs as I’d hoped, so by the time we got close to the end, I was ready for it to wrap up. And then, we got to that one scene – if you have seen it, you know which one I mean, and if you have not, I wouldn’t dream of spoiling it for you - and suddenly I was all in, bawling right there in the movie theater to the strains of an ABBA song I had never even heard before. They sang of the images passing by and I wondered if they meant those fleeting, hazy memories of young, chubby-faced parents, and babies in striped cotton blankets? They sang of memories mirrored in our children's eyes, which made me think of how you can sometimes, if you look very closely, you can catch a glimpse of the baby, the toddler, the teenager, and the grown up there, all at one time. They sang of how hard it is to find words to express how all of that feels to a mom and as I tried to find those words, I found only that if you get quiet enough, you might hear in your middle-aged ears your impossibly-now-grown-up baby’s first laugh, which causes big, silent tears to fall, decades later and for no good reason, onto your keyboard. They sang, too, of how clear some things are looking back, and it is true that I can see clearly now how a young mother who probably was too young and unprepared to have been left in charge of anything came to understand, through the miracle of motherhood, how each of her babies did belong to her, and to sustain that belonging through all of the times, through all of the years.

But it was when the song reminded me gently that I don’t possess my children that the cry really got ugly, because I knew that I had forgotten to remember that part. No one reminds you to keep that part in mind, that they won't always belong to you; no one tells you what it will feel like when it happens, or worse, when you realize that you have forgotten to notice that it has already happened, that they have not belonged to you for some time.

When you give birth to a grown up, it is exactly like the first time, which is to say that you stare at them, for too long sometimes, with a mix of adoration, pride, and terror, because you cannot quite believe the marvel and the miracle that they are, because you are not sure what else to do. Until eventually someone suggests something that you haven't even thought of, and then send you on your way – from the college, the new apartment, the wedding - with only a set of encouraging platitudes as unconvincing as the first. Unprepared again, you do it wrong a whole bunch of times before you get good at it, and you cry a little bit here and there, and sometimes still, your older mom-self wonders, in undoing all the belonging, if there isn't someone better for the job.

I spent so much time learning how fully they belonged to me, I forgot that the day would come when they would not.

My loves, my life. 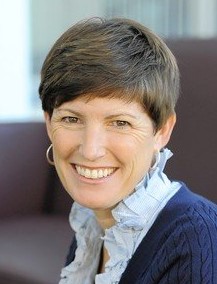 Artisan writing in small batches. Telling the truth - about cancer survivorship, mothering and midlife - even if my voice shakes.