​How the Loss of Our Pet Taught my Boys Compassion

Published by Noelle Elliott on April 6, 2015 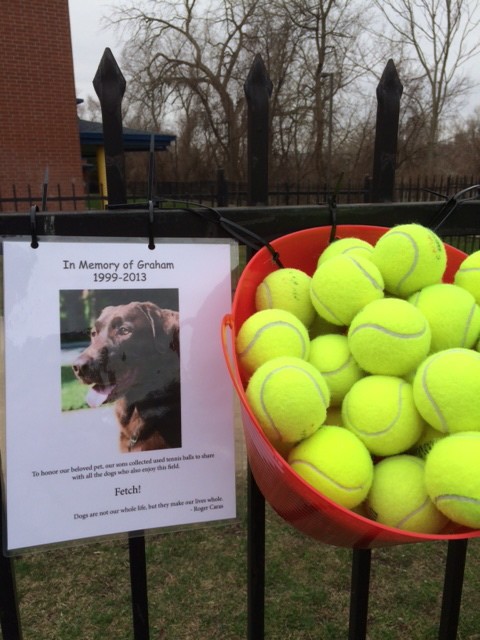 We had our dog Graham before we got married. He was our fast pass to learn about parenting. Specifically patience. He was there when we got married and welcomed home a baby four times over. Each time he willingly took his place in the back

seat of the importance bus.

Every birthday photo had a picture of

Graham in the background. We thought he was waiting for a fallen crumb, but I think he was taking a sigh of relief that he had successfully protected his brother another year.

He was the boy’s fulltime playmate, the silent confidant that understood how unfair life with parents could be. Or life as a parent could be. He was up pacing the hallway with a screaming baby just as we were. His bloodshot eyes matched ours after a sleepless night. He was there for the happy times as well as the sad ones.

. I tried to not notice that he couldn’t get up to bark at the mailman. I was preserving his pride. When he wouldn’t stop panting we took him to the vet. The vet let us know it was time to let him go. The boys understood the best they could. The night before we took him to his favorite park, fed him ice cream and gave him more hugs than we could count. He couldn’t chase tennis balls anymore so the boys did it for him.

I arranged for a babysitter and I took Graham alone for his final car ride. The most heartbreaking moment was also the most heartwarming. Each one of the boys stood in line to say their last goodbye to their oldest friend.

I learned a lot about them that day. They had empathy for their beloved pet and understood what needed to be done even if they didn’t want to do it. They showed strength behind their tears when telling him what a good dog he was. And in a way showed me that I hadn’t failed as a parent.

The boys were all under 10, but their wisdom exceeded mine. They knew that they couldn’t bring Graham back, so they didn’t try.

My middle son’s biggest concern was that Graham would be lonely. In an effort to comfort them, I explained that a minute in Heaven was equal to a decade here on Earth. To which my son explained that it would it only be about 8 minutes until I joined Graham. That would be if I lived to be 115, which is possible, but not likely. Although it made them feel better, it made me realize that time is fleeting.

collect used tennis balls to keep at Graham’s favorite dog park. Although Graham isn’t here, he wanted other dogs to experience the enormous joy that a tennis ball can bring a dog. We sent out a note to neighbors and friends and within 24 hours we had three garbage bags full of used tennis balls.

Kids need to take action to show compassion. I can’t think of a better way to mourn the loss of a loved

one than doing something that made them happy.

A boy’s loss of his lifelong

pet was reflected back to us with tennis balls from friends, neighbors and even strangers. It came full circle.

It also taught them that unconditional love

doesn’t need to be spoken, to be felt.

Housebreaking a Dog with Kids is Simple, Right?
The day a dog changed my life
Our Family's Faithful Companion
advertisement

Housebreaking a Dog with Kids is Simple, Right?
The day a dog changed my life
Our Family's Faithful Companion