I finished the last bites of my dinner and immediately began clearing the table. My wife loaded the dishwasher with dishes I was bringing from the dining room.

Once the meal cleanup duties were completed, my wife and I wandered into the living room and sat down. We began to unwind from the day’s work by watching TV and checking our Facebook pages.

The first post in my newsfeed was from Dennis, a friend of mine, announcing his new daughter’s dedication on this coming Sunday. In my usual attempt to be funny, I left a comment that read, “I’ll see you there, if I can get approval from Her Highness,” and then I moved on to the rest of the newsfeed.

A few moments later, a notification popped up telling me that my wife, who was sitting across the room from me, had commented on the same post. When I clicked back to Dennis’s page, she had posted a response under my comment that read, “Why do you always have to make me sound like such a bitch?”

“I was just being funny,” I answered via comment, annoyed at her lack of a sense of humor about it.

“You are always trying to be funny, but a lot of times you’re just a jerk.”

Before I could respond, a comment popped up on Dennis’s post from Jill, a mutual friend, which read, “We are honored to be able to share this blessed day with you and your family.”

Getting angry, I typed, “Do you mind not butting in, Jill? And @wife: You think everything I say is being a jerk! You have NO sense of humor!”

The next comment came from Dennis, whose page we were on, “Could you guys go fight on someone else’s post?”

Then another response from my wife: “I used to have a sense of humor till YOU wore it out with your STUUUUUPPPIIIIIIDDD jokes!”

Having had enough, I hit “like” on my wife’s last statement, and exited the page.

I was still fuming when the little scrolling account of what everyone is doing on Facebook showed that my daughter had commented on a status from her iPhone. So wanting to move past the argument with the wife, I clicked to see what she had said.

My daughter’s friend Nikki (with a little heart before and after her name) had posted that she had the flu and wasn’t feeling good. My daughter had then commented that she was sorry and hoped she felt better soon. Being proud of my daughter’s kindness, I “liked” her comment.

I then paused for a moment to take a bite of the dessert that I had been working on while Facebooking. Before I could move on from my daughter’s friend’s page, a comment popped up from my wife that read, “Don’t you dare ‘like’ me and then walk away!”

She had obviously seen in the same scrolling, privacy-invasion box that I had liked our daughter’s comment and followed me there.

“I’m not continuing this conversation if you are going to be unreasonable!” I answered.

Then a comment from Nikki, who neither my wife nor I were actually “friends” with, saying, “Who are you guys and why are you on my page?”

This was followed by a comment from my daughter who said, “YOU GUYS ARE RUINING MY LIFE! GO AWAY!”

“@Wife: I’m not wrong! @Daughter: Oh yeah! Did I ruin your life when I bought you two new pairs of jeans last week? @Nikki: Sorry, we’ll be done here in a minute.”

Meanwhile, I saw that the wife had left a comment back on Dennis’s page that read, “Sorry, Dennis, he thinks only of himself.”

But before I could respond to that, my daughter commented, “That doesn’t give you the right to ruin my life!”

Nikki wrote, “Will you all please go away?”

My other daughter popped up in the “chat” box: “YOU BOUGHT NATALIE JEANS? WHY DIDN’T I GET ANY?”

Another notification chirp let me know that my wife was tweeting @me that #MyHusbandIsAJerk.

I was now furious. I began firing back responses.

“@Nikki: TURN OFF THE COMPUTER, IF WE ARE BOTHERING YOU!”

“@Daughter 2: I BOUGHT YOU A CAGE AND FOOD FOR YOUR STINKING RODENT, WHO KEEPS US ALL AWAKE RUNNING ON HIS WHEEL ALL NIGHT!”

I then tried to go back to the dedication post to get the last word in, but discovered that Dennis had “unfriended” and blocked us. And he wouldn’t answer my call to see if he would at least let me dictate my response to the wife’s last remark.

So I set my cyber sights on daughter 1, and fired off a comment that read, “WHY DON’T YOU BUY YOUR OWN CLOTHES AND FOOD, YOU SELFISH BRAT!”

But at the exact moment I hit the send button, I noticed that the comment above mine didn’t look familiar. It wasn’t from my daughter, my wife, or Nikki. Scrolling up, I realized I wasn’t even on the right post.

It took several sweaty minutes for me to figure out how to delete my comment to the Somalian child. After which I called every Facebook friend who I thought had been witness to the whole debacle and apologized.

Then I gathered the wife and daughters all together in the same room, and we had an all-out, old-fashioned, face-to-face blowout…complete with shouting and arm waving.

And just to make sure everything was good, I made a large (by my standards) donation to the charity whose video featured the Somalian boy.

Dennis has still not accepted the multiple friend requests I have sent him.

If you liked this story, there is a whole book of them: Single Family Asylum 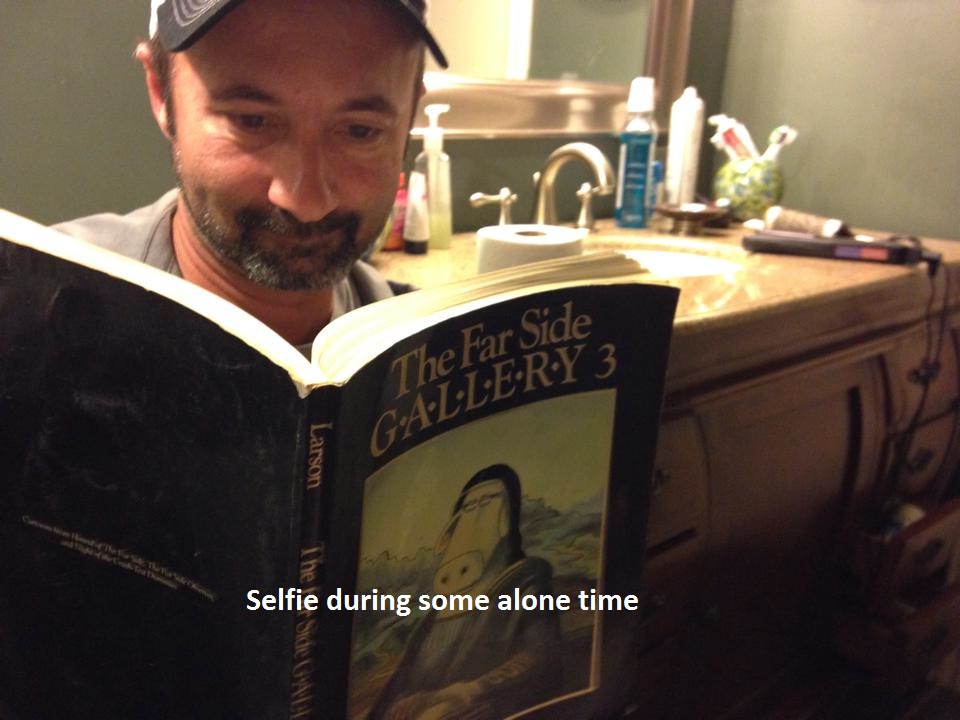 Just an imperfect husband and dad giving it my best shot!

When Your Kids' Father Is Remarrying And They Hate Him For It
The kindest thing another mom ever said to me
What If Dads Held Press Conferences?
advertisement

When Your Kids' Father Is Remarrying And They Hate Him For It
The kindest thing another mom ever said to me
What If Dads Held Press Conferences?