​The clock shows 6:30 but it’s midnight black outside. I only have five minutes to get out of bed if I want to stick to my schedule, which, I guess I kind of have to. I find my son sleeping in his crib. He made it through the night, a wonderful thing because my wife and I are total suckers. I recently read somewhere that Teddy Roosevelt once said that President McKinley had "no more backbone than of a chocolate eclair." Pretty much us when he wakes up crying.

But he’s snoozing, in that kid position with his little butt in the air. It goes without saying that if it were a Saturday or Sunday morning he would've been jumping up and down and shouting, “Out?” twenty minutes ago. But it’s a nondescript Tuesday, so he’s sleeping like a teenager. 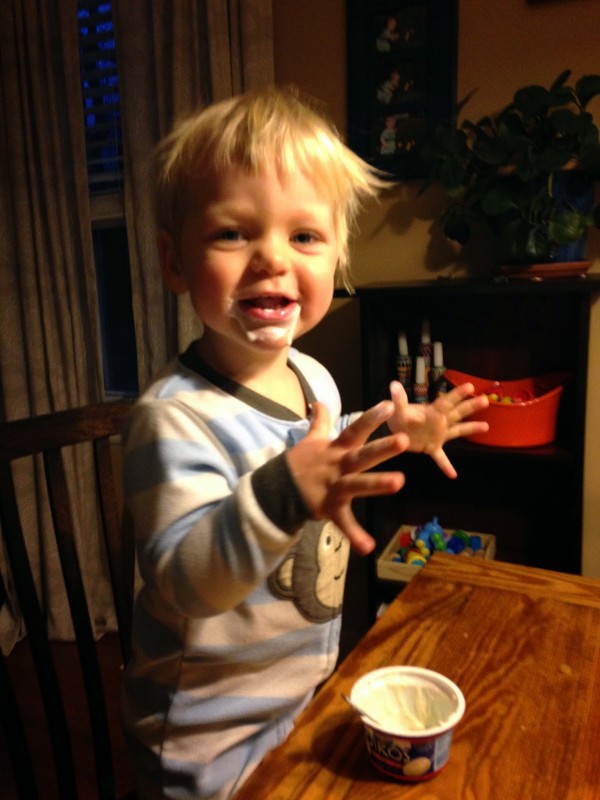 “Yogurt time?” I whisper. It's like a cannon fired in the room.That’s all it takes. He snaps his head up to attention, his eyes blinking to life as he assesses the situation. It amazes me how fast a two year old can go from dead sleep to wide awake in two words flat.

I lift him from his crib. He rests his head on my shoulder. The fish tank bubbles and one of the dogs slides off the bed in our bedroom. Like I said about being a sucker.

I set him down and he scampers off, getting his little legs beneath him. We set off for the kitchen where he goes right for the fridge. Recently he has discovered that he can in fact, open it. But his morning muscles haven't fully woken up yet.

I grab his yogurt. He flinches at the light from the fridge. We take our places at the table--him with his yogurt and me with my Cheerios. I’ve come to love this time of the day. The windows are like mirrors. There's only a wink of light through the trees as my slice of the world is sleepy and quiet. Being that I haven’t yet listened or read the news the world is still a beautiful place. Hopeful even.

The dogs wander in and make a lazy attempt to stretch before thinking better of it and curling up on the floor. My son and I go right on shoveling spoonfuls of yogurt and cereal into our faces. This is what makes all that awaits my workday worth the hassle. This makes traffic bearable. It makes slogging through the grind all the more worth it..

He looks up at the light and laughs. I've put Patrick the Monkey up in chandelier.

“Patrick is silly,” he states. I nod. His hair is matted and spikey. He’s wearing little pajamas and footsy things and I cannot imagine a better way to wake up. The horizon blushes. My wife waltzes into the kitchen and gets the coffee maker groaning. The day is about to begin in earnest, slinging its challenges and hurdles in the form of work: emails and voicemails, meetings and text messages.

But for now, it’s all still.

Pete fanning is a husband, dad, and blogger over at Fatherknowslittle.blogspot.com where he writes about navigating the waters of parenthood while staying afloat the boat of sanity.

Stop Asking About My Baby's Sleep
Co-Sleeping: Why I Share My Bed
The Big Change – Transitioning Your Child From Crib To Bed
advertisement

Stop Asking About My Baby's Sleep
Co-Sleeping: Why I Share My Bed
The Big Change – Transitioning Your Child From Crib To Bed