My little fighter had a rough start from the get go. He was a deployment baby, my fiance had just gotten back from Iraq in November of 2007, and by the end of December 2007, we had a positive pregnancy test. Myfiance had to go back to base in California (USMC), while I stayed in Indiana. We decided to move the wedding up, and that's what we were working towards. It was during my first trimester that I had some bleeding, then learned I had placenta previa. I had already miscarried a child a few years before, so this was super nerve wracking for me. At 25 weeks, a child jumped onto my belly during a family get together, which in turn put me unknowingly into labor. For 24 hours I went on with my life, unaware that part of the placenta had been ripped off my uterus wall. I ended up in the hospital for 3 days, steroid shots for the babies lungs, and left with pills that would keep my contractions from coming too often and too hard. I had to go on bed rest, quit my job, and through all of it, my fiance was on base, but we talked all the time. We got married in June of 2008, only having a few dances as I was still in labor, and a few days later, he went back to California. A month later, I was sick, had gained a ton of water weight, and almost passed out in the shower. Doc said go to the hospital, so I did. My in laws were with me. After being checked, my OB wanted to take me by C-section as the baby was breech, but I was 80% effaced, and was having a baby regardless. So I called my husband, he flew home, and on July 24, 2008, an almost 6 week preemie was born at 6 lbs, 8 oz, which was quite a large preemie. I barely got to see him as he was rushed away to the NICU. His lungs were collapsing, which they did twice, and I was absolutely afraid for him. I sent my husband with the baby and finished my C-section out. It was almost 12 hours later before I got to walk down to see my son. You couldn't touch him because everytime you did, his heart rate dropped, he had a vent, a feeding tube, an IV in his umbilical stump, and was beginning to have blood in his urine. There was talk about moving him to the larger hospital a couple towns over as the hospital he was born in had done everything they could do, and by the next day that's what happened. He was transported by ambulance while my husband and I drove, I had refused to continued recovery there as I wasn't going to be separated from my son. South Bend Memorial was exactly where we needed to be. The doctor there was amazing, looked over my son's case, and simply said to me, "He just needs time." And so we gave him that time. I finally got to hold my son two days after he was born. The nurses there took such amazing care of him, and he got stronger every day. He was able to come off the vent after about a week, was on oxygen for another two days, and after no breathing help for 24 hours and weight gain, he was able to come home. He's now a very sarcastic 9 year old, who you would never know was premature. The only issue we still have is that he did develop asthma, which they told us might happen back when he was in the NICU, but he only has a few flare ups every year. The NICU at Memorial saved my son, and I'm forever grateful. They hold a reunion every year, which we go to, and we randomly run into a nurse that remembers us. Every preemie story is different, and this one is ours. 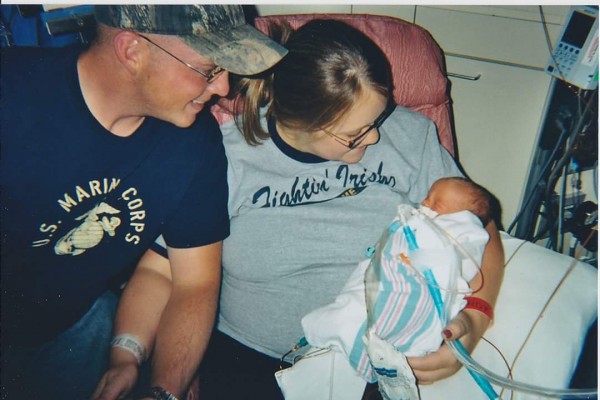 Mom of two, wife of one.

NICU Family
Hunter, One Ounce at a Time
Our Miracle
advertisement

NICU Family
Hunter, One Ounce at a Time
Our Miracle