No More Negatives: What a Photo App Taught Me About Myself

I’m smushed next to my husband, Kyle, on a grounded Delta flight, our elbows overlapping, our upper arms touching. There’s a maintenance issue.

“We should’ve just driven from LA to Phoenix,” I think.

That was one of the many options I’d considered when overthinking this trip. Instead, I’m stuck midway back on an ultra-narrow plane, washed up like a beached whale against the jetway. The sickening recirculated air smell is suffocating. Or maybe it’s what’s happening between us.

Kyle is showing me a cool new photo editing app called Perfect 365. Apparently his younger, millennial sister taught him how to use it on a recent trip home. I’d noticed that the last few pictures he’d taken of me since returning had been particularly flattering. Almost too flattering. In fact, when I saw the last photo he took, I exclaimed, “I look like a wax sculpture!”

In the snapshot, I had no lines on my face at all. I looked 20 years younger. And svelte!

“Wait, how did you do that? That’s not at all what I look like!”

“I don’t want to give away my secrets,” he'd said.

Now, trapped in our seats, he confesses to covertly using the new app and agrees to demonstrate.

“Take a selfie,” he says, handing me the phone.

I smile at the camera, lips closed.

He grabs the phone back and opens the app.

“Look,” he says, proudly, sliding a few bars back and forth.

My skin goes from its 43-year-old, too much time in the sun, wrinkled state to sandblasted perfection.

“You can change your hair, too! And your eyes!”

My hair goes blonder. I get green eyes. He makes my lips fuller with a shiny pink sheen. My eyelashes extend and darken. Even my smile grows.

Then he manipulates another variable.

“You can even trim your face,” he says.

We both watch as his finger slides right and I magically lose 20 pounds. My cheeks become angular. My face morphs.

“Hold on,” I say. “Did you thin down my face in the picture of my brother and me after tennis yesterday?”

“Did you do it to the one you just took in the airport a few minutes ago?” 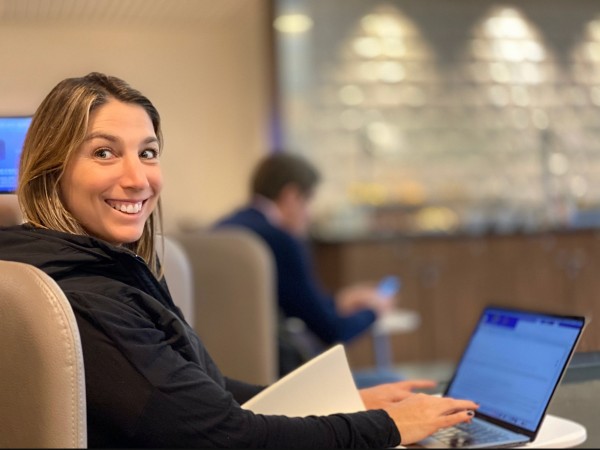 "Did you do the one from the Apple store?!"

He turns back to the app, tweaking my appearance to “perfection.” I look like a complete knockout. Unrecognizable, but a knockout.

“That doesn’t even look like me,” I say softly.

He shrugs and keeps playing.

I feel like I’ve been punched in the stomach.

I know it isn’t easy for him trying to navigate my complex relationship with my body. After all, my body and I have been really getting into it for about 35 years, ever since I was old enough to count calories and write down my daily intake in the 1980s.

He and I have only been together for five years. He wasn’t there through my teenage ups and downs, my Weight Watchers emaciated physique in my 20s, my three pregnancies (one a twin pregnancy) and subsequent recoveries. No, this adorable younger husband of mine showed up when I was already an “after.”

Now, when I complain about my body or rue that I’ve gained weight, he always counters with, “You look beautiful.” Or, “Stop, you’re perfect.”

Which is bullshit, but I buy it.

I know I’ve gained a few more pounds than usual now. I’ve noticed horrifying little rolls of back fat between the bottom of my bra and the top of my tights. Nowhere to hide those suckers. My skin under my arms seems to hang lower than humanly possibly. I appear to have bat wings. I’ve started reflexively cradling my belly as if I’m pregnant as it hangs awkwardly over my c-section and hysterectomy scars. As for my ass, well, I refuse to even turn around and check. I just can’t.

I feel like this turn of events in my figure is a big, sudden unexplained mystery. How could I have just ballooned like this?! I’m flummoxed! Even though in reality I’ve only gained about 10 pounds since our wedding, it feels - and looks - like a lot more on my 5’ 2” frame. At least my face has been mostly spared.

But of course it makes sense. I’ve been eating anything I want whenever I want it. Chocolate chip cookies daily. Birthday cake at kids parties. Girl Scout cookies with breakfast. Pizza or pasta with the kids for dinner. Half a box of Teddy Grahams as I work on my laptop in the kitchen late at night to the hum of the dishwasher, my four kids finally asleep. I don’t “watch it” at all.

I’ve also basically stopped exercising which I used to do religiously. Instead, I’m using all my “free” time to prepare for my podcast interviews and build my business.

I’m more sedentary than ever. The other day, Kyle went out and played an hour and a half of tennis and came back. I’d only gotten up from my desk once in all that time and just to go to the bathroom. The kids are old enough that I don’t need to literally chase them around anymore. What did I expect?!

The thing is, I used to be able to get away with this. Most of it, at least. Now? Not at all.

Kyle texts me the final product of his app doctoring as I flip through the Sunday New York Times next to him. I let the paper fall on my chest as I unlock my phone and see a younger, prettier version of myself staring back at me. Is this who he really wants? He’s too kind to tell me that he notices my body changing. Perhaps this is his way. 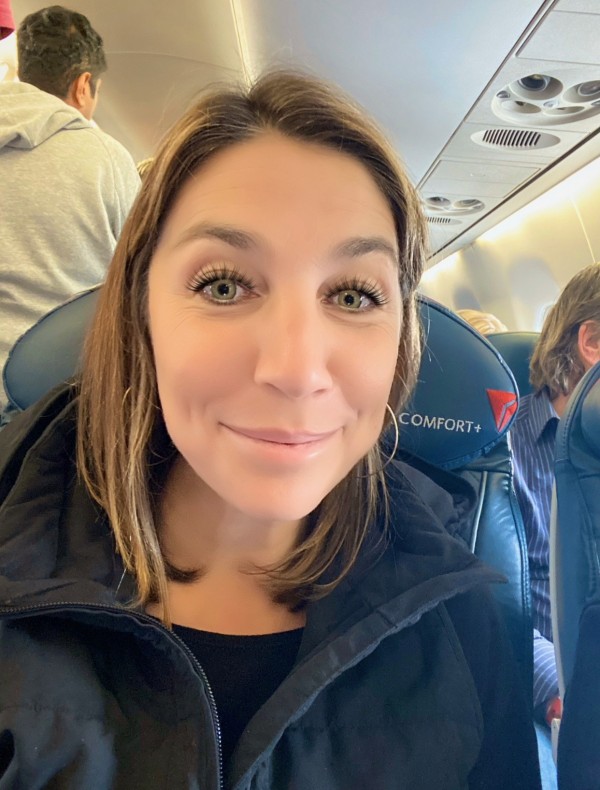 I text him back: “Keep dreaming. #yournextwife.”

He bursts out laughing beside me.

But I’ve heard what he can’t and won’t say.

I would look better thinner. And younger. There’s proof now!

Would he slide me to thinner in real life if he could? Would I? Probably. Perhaps I’m taking this personally because of my history and he wouldn’t change a thing. But....

I hate this app.

So can’t I just lose the weight? I don’t think so. Not right now.

I don’t have the energy, time or drive to take it off. I’m still squeezing into enough of my clothes, the ones in the largest size I own, not to truly panic. Emotionally I can’t tackle tracking Points or food journaling, weighing and measuring every bite, investing mental space.

I can’t part with my nightly sweets, the snacks that power me through my endless yet truly exhilarating work. I can’t seem to give up time with the kids — or the time when the kids are in school — to work out. All my energy is being funneled into getting other things done. Which I do. Well.

But what about my body?

Kyle puts the phone away. Kisses me. 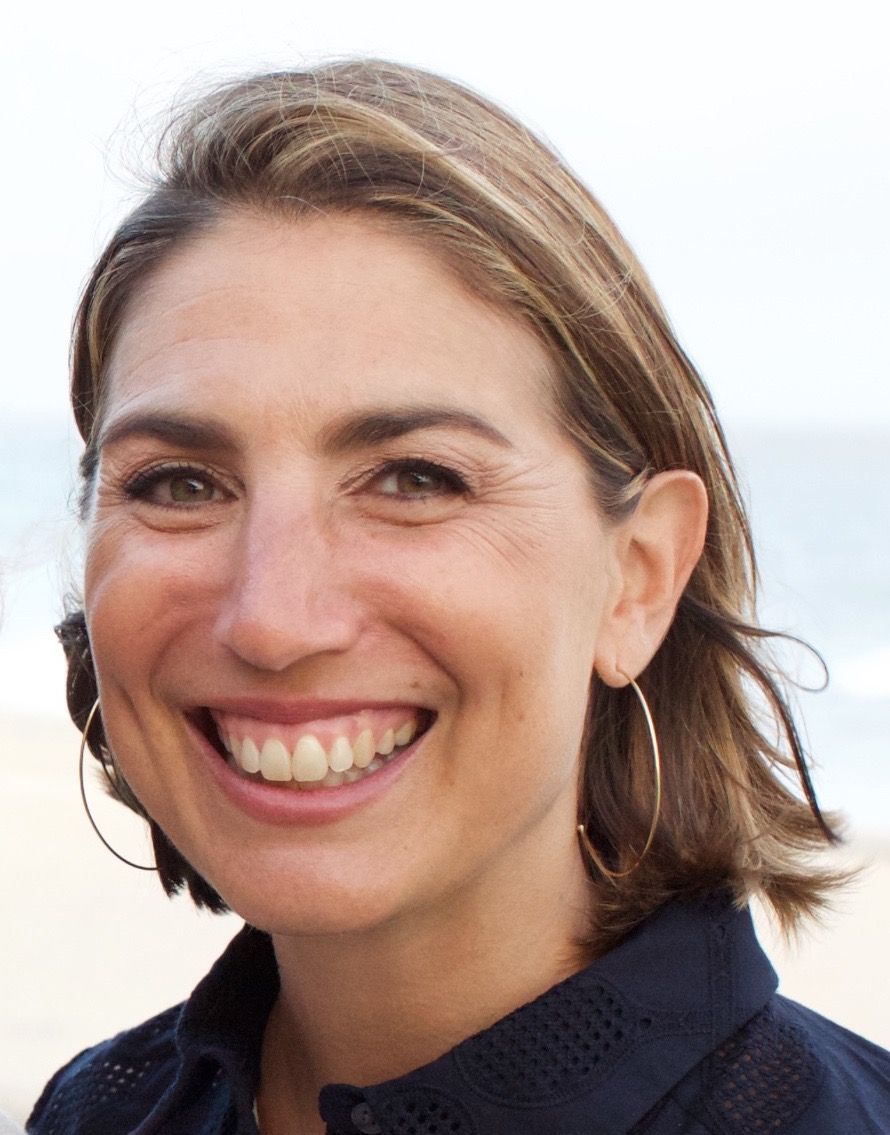 Zibby Owens is the host of podcast, "Moms Don't Have Time to Read Books." She's a mother of four in New York City and a freelance writer (www.zibbyowens.com). Her work has appeared in Redbook, Marie Claire, Shape, Self and Modern Bride, and online at Huff Post, the New York Times Mommy Nearest and Medium.

Come Home Safe
Everyone has a breaking point..this was mine
There's no cell phone privacy for my middle school-age kids
advertisement

Come Home Safe
Everyone has a breaking point..this was mine
There's no cell phone privacy for my middle school-age kids

TODAY is teaming up with AdoptAClassroom.org to help teachers and students nationwide

Adrienne Bailon and husband Israel Houghton welcome ‘secret’ baby: ‘We are so in love’

Hoda on the 'secret fears' of being an older mom, and the thought that always helps