My Parenting/Family New Year’s Resolution for 2016 is pretty simple—cut back on the amount of TV my kids (ages 4 and 5/12) watch to just an hour a day….although honestly, I’d be happy if they would just stop confusing the TV “on” switch for a light switch. It’s gotten to the point where they cannot walk past the TV without turning it on! 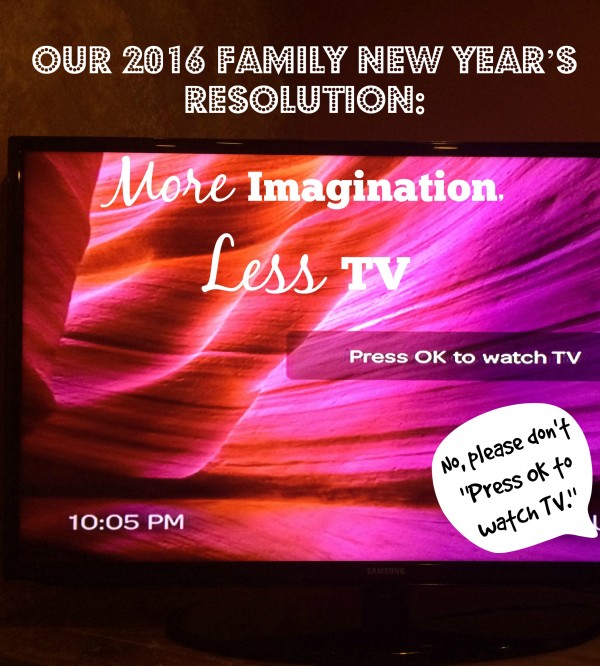 Maybe they think they’re being good Samaritans “Oh no! The TV is off! We better turn it back on!”

Maybe they think our house will self-destruct if the TV’s not on. “Oh no! We must save our home! Quick-turn the TV back on!”

Maybe they think they’re getting an extremely early start on a PhD in TV Studies.

I’m not exactly sure. But what I do know is it’s gotten bad, and we need to fix it!

I should’ve known we were in trouble when a couple years ago my older daughter (then 3) said “TV is important!” when I told her she had watched enough. At the time, I laughed thinking “Well, she’s right. I do have a master’s degree in TV, so who am I to argue?” And I remembered nostalgically how when I was little, I would turn down the volume on the television when the Welcome Back Kotter theme song came on (since that signaled my bedtime). I would stretch out my toy clean up for the whole half hour just so I could get more John Travolta screen time. But what I forgot was that we didn’t have cable yet and even though I may have stayed up too late watching TV, I didn’t watch it all day. I played outside, I played with blocks and built enormous castles, I used my imagination for hours until certain shows came on at certain times. I didn’t just sit in front of the TV zoning out for hours—which I’m very embarrassed to say my kids tend to do if I don’t keep after them.

So, I thought about how we handle other behavioral issues like following directions, getting ready for school, etc and I realized our reward systems in the past have worked pretty well. We’ve done things like the Fuzzy Stick Jar (where you earn a fuzzy stick/pipe cleaner for every task you complete but you lose a fuzzy stick if you do something bad), standard chore charts, and sticker books (same concept as the Fuzzy Stick Jar (you get a sticker for doing your chore but lose a sticker for bad behavior).

Since I want to accomplish two things: 1) stop the automatic TV power-on and 2) encourage them to use their imagination and play with their toys, I decided to go with the reward chart route. 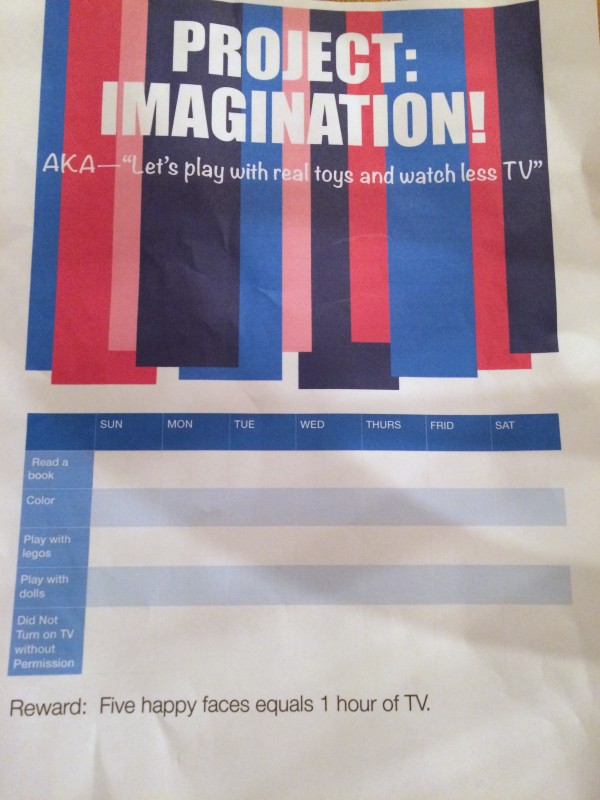 In the right-hand column I wrote the four basic tasks my kids need to be doing instead of watching TV such as: read a book, color, play with Legos, or play with dolls. Then I wrote “Did Not Turn on TV without Permission.” Every time they do one of the aforementioned activities, I’ll give them a smiley face. Once they receive 5 smiley faces, they can have 1 hour of TV. I know I’ll probably have to tweak this, but I figured this is simple enough to start. I think I might throw in some bonus stickers every time they walk past the TV and do not turn it on because I know that’s going to be a hard habit to break.

I sat down with my girls and we talked about all the fun things they could be doing if they weren’t watching TV. I got them excited again about their toys and their coloring books. I explained how when we start a new year, it’s a good idea to try to make a plan on how to improve ourselves and we call it resolutions. So we decided to work on our TV intake and we gave this potentially scary resolution a big fancy name “Project Imagination!” or “Let’s play with our toys and watch less TV” in layman’s terms. Here’s a video of my older daughter and I discussing our family resolution. As you can see, she’s pretty excited.

Do you have a TV problem in your house? How have you tackled it? I’d love to hear your feedback. Leave me a comment below.

Shana is a self-proclaimed Media Mixologist and mom to two little girls. On her blog, Technotini.com, she mixes up cocktails of everything that life throws her way. Her work has been featured on the Huffington Post and Blogher.

Happy outcome of distance learning in a pandemic: Transgender kids are thriving If schools don't reopen, will parents have to choose between jobs and kids?