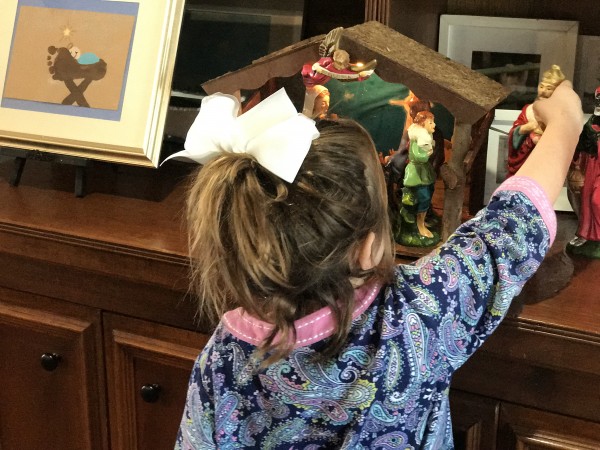 The five-year old awoke on this rainy, dismal Sunday and spit-shined baby Jesus. And the Wise Men. And Mary and Joseph.

The donkeys and cattle even received special treatment.

I had been reluctant to bring the vintage nativity from our basement. Of all the mangers I own, I didn't want this one to fall victim to the negligence of my two smallest children. My 93-year-old grandmother had entrusted me with the nativity that our country church had used for years at our hanging of the greens ceremony- a pious evening where parishioners adorn the church with greenery and symbols of our Christian heritage. It's a service in preparation of Christ's coming. Assembling the nativity, of course, was the centerpiece of the evening service.

Should I bring out this antique relic in my house? Would it be safe in a home where sporadic sword fights and Jedi battles ensue?

After a bit of deliberation I decided that this year I would take my chances and unbox the much-loved relic. The contents of the well-worn cardboard box deserved to be showcased in our farm house; not hidden in the basement.

The dust scattered as I opened the box. My preschool daughter helped me unwrap each ceramic, hand painted figurine. Each piece had been carefully preserved, swaddled with layers of cloth, at the hands of my grandparents.

I'm not sure how many years it had been since the now dusty angel had hung on top of the hand-carved barn or how long it had been since the shepherd, now looking a bit gritty, had stood watch over the flock, but this year they were making their grand reappearance. And they needed to look their best.

The five-year old took ownership in the task. She grabbed a nearby cleaning cloth and began carefully washing away the layers of soil. She sprayed a bit of cleaner on the rag and carefully scrubbed until each face shined. She inspected the cracks in the ceramic to make sure they could withstand another year. She took count to make sure all the major players of the gospel were present.

And then she transferred them, one by one, to the bookshelf my grandfather built and gingerly set-up the scene of Bethlehem.

The thing about my daughter is that she isn't known for always being careful or being particularly reverent. Stray crayon marks line our walls. A barbie doll might loose it's head or hair. She's the one who sings the highest soprano for the effect of laughter in the Christmas play. One minute our daughter might be a dancing princess and the next jumping off the top of our couch. She's a beautiful soul, but a busy one. Her creativity often looks like destruction to the casual observer. Her body is constantly moving and jumping.

Except she understood, without me pointing my finger or raising my voice, that this hand-painted manger from her great-grandmother--well, it was special.

And it this piece of Christmas decoration was deserving of her using gentle and deliberate movements.

So she gave that manger and the most royal of all families her careful attention as she assembled the nativity.

And now, on this Sunday morning, the day after we set-up the nativity, she returned to the manger, grasped baby Jesus in her small hands, and gave him a spit-shine. To make sure he truly glowed.

The gingerbread village didn't receive this type of care. Neither did the Santa Claus on the Christmas Tree. Nor did the festive Winnie and Pooh figurine that we had brought back with us from Walt Disney World. None of those beloved figures found themselves deserving of such time and attention.

You see, she knew. She, as a five-year old, was able to differentiate that the other items in our house are fun and full of joy. But the manger-- our symbol of Christian heritage--is holy.

And that made me beam.

Like most parents, I second-guess myself all of the time. We've watched the Grinch, sang Bing Crosby, laughed at the squirrel in the Griswald's tree, drank loads of hot cocoa, and crafted homemade ornaments.

But had we put enough focus on Jesus?

Were my lessons sinking in?

Would my kids be able to see that it isn't the man coming down the chimney that makes Christmas, but that our gratitude for the ONE who made the stars is the key to the season?

But this morning I didn't second-guess myself. Her sincere act of love (albeight spit-shining baby Jesus so that his face would glow) showed me that the heart of Christmas was apparent to her. The truth of Christmas was rooted in her soul. She was giving of herself.

She was engaged in a silent worship of sorts.

Her gratitude for God was on display. Spit-shining the baby in the manger was her child-like tribute to the King of kings.

She, at the age of five, was able to prioritize Jesus over the Santa in our Christmas Village. She was choosing to make HIM shine. Not Santa.

Christianity today says, "True worship is defined by the priority we place on who God is in our lives and where God is on our list of priorities."

My Sophie was silently worshiping HIM. She showed her gratitude by engaging her heart in the task of worship by giving herself to HIM. 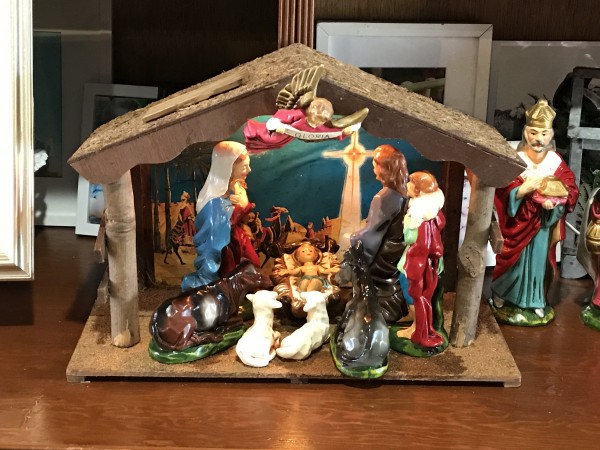 It turns out that the manger didn't fall victim to the negligence of the five-year old; instead that dusty old manger found itself loved well by a sassy five-year-old who loves making glitter ornaments, baking holiday treats, and laughing at Home Alone. The manger that once sat proudly in my old church found itself loved well by girl who hopes for a pink motorcycle from Santa, but who knows, that in the hierarchy of Christmas, that it is Christ that is the brightest STAR of our Christmas.

I suppose we had our own private hanging of the greens ceremony this weekend. Unexpected and unlikely. Unplanned. But it showed me preparing our hearts and homes are just as important as preparing our churches.

"On coming to the house, they saw the child with his mother Mary, and they bowed down and worshipped him." (Matthew 1:23, NIV). 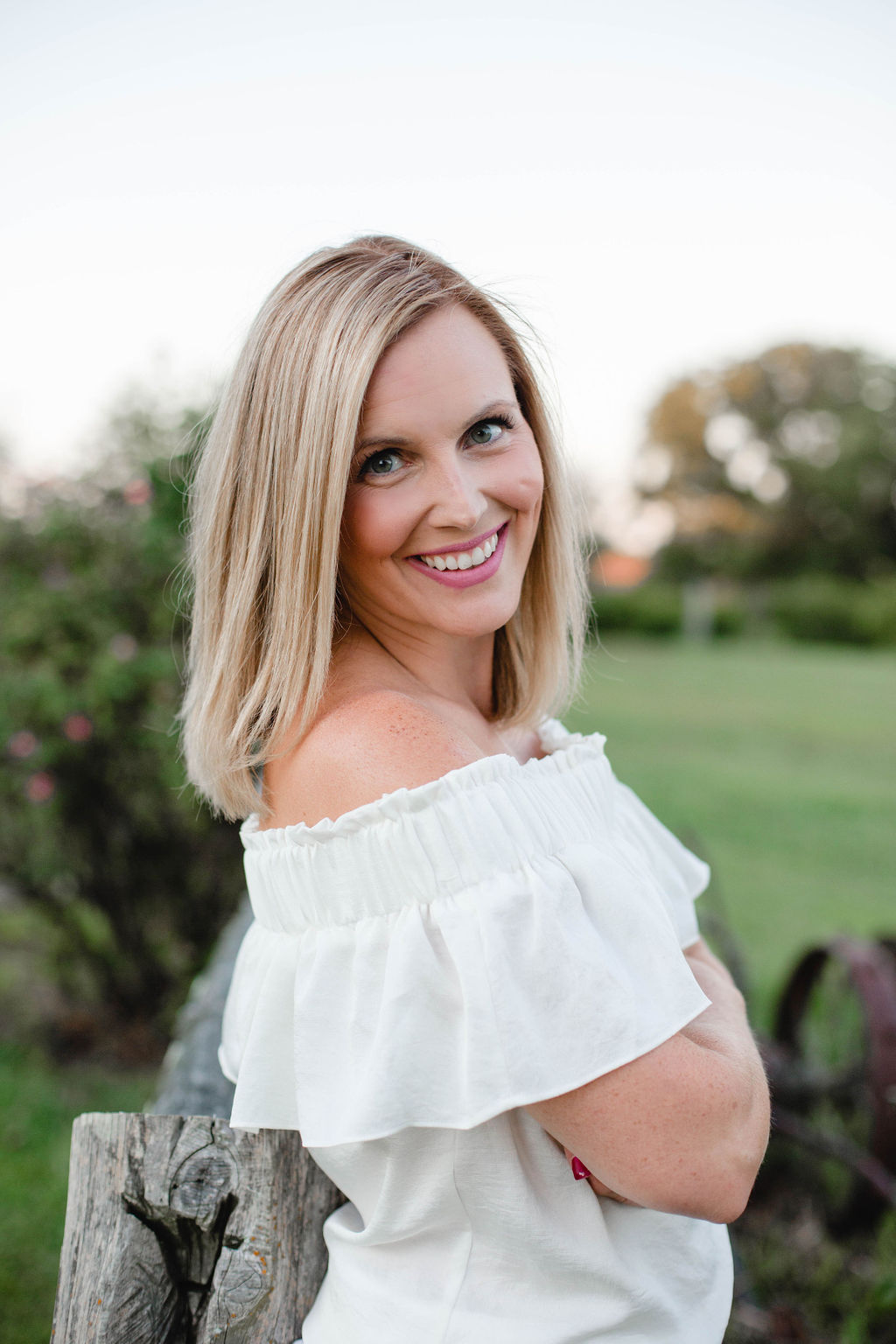 Mom. Farmer's Wife. Writer. Dreamer. Schemer. Ph.D Sarah lives in the south on a cattle farm where she raises her three mischievous children (& one on the way) and is farm wife to her high school sweetheart. Fun fact: she doesn't share desserts...get your own! Her award-winning book, Loved Baby: Helping You Grieve and Cherish Your Child After Pregnancy Loss, is now available wherever books are sold. Her next book, a farm devotional published by Harvest House Publishing, will arrive in Fall of 2021. Connect with Sarah on social media.

Moms, Just Say NO to the Santa Wars!
Keeping Up With Christmas
The Question I Dread
advertisement

Moms, Just Say NO to the Santa Wars!
Keeping Up With Christmas
The Question I Dread Have a child with COVID-19? Doctors give tips for keeping families safe