In seventh grade my friends and I wrote notes to one another. Not the quick pass-across-the-aisle kind, but long letters crafted carefully over the course of the school day and expertly folded into a neat triangle before being hand-delivered to their intended recipient.

I remember the process of writing the notes much more clearly than I do their content, which was probably a predictable mix of homework complaints, crush analysis, song lyrics, and weekend plans. A clean sheet of lined binder paper and a purple ball point pen came together to create a portal through which my twelve-year-old self could make sense of the mundane and the profound alike. I wrote as a way to develop new friendships, having been recently dropped from the fishbowl of elementary school into the much bigger social sea of junior high, and also to maintain closeness with those friends who knew me best.

To receive a note in reply was the highlight of my day, especially if it was a long one. I’d hurry to my next class to allow time to enjoy it before the bell or, if it was really one to savor, wait until the bus ride home. While the letters had a journal-like feel to them (including margin doodles and excessive exclamation points), they were very importantly a two-way conversation, entries into an enchanted diary that was able to write back and say, “No way! Me too!”

By freshman year of high school the note exchanges had all but phased out, leaving room for the epic phone conversations that replaced them. It was as if my friends and I had needed pen and paper to bridge the gap between the easy, giggly dialect of childhood and the deeper, more intense exchanges of adolescent friendship. While we were suspended awkwardly between the two phases we relied on the process of writing—and the joy of reading—to carry us through until our voices could speak aloud the ideas those letters contained.

Looking back, I’m so glad I muddled through my early teen years scratching my thoughts out onto loose-leaf paper and practicing the perfect curlicue script with which to write my friends’ names on those folded-up missives. I’m thankful that mine was one of the last classes to make it all the way through high school without daily electronic contact with my peers. We had shorthand and code words and little drawings that weren’t all that different from today’s tweens’ emoji-heavy snaps and chats, but there was labor involved in producing the words we exchanged, and that labor bore fruit in the form of my lasting appreciation for letter-writing.

It was this appreciation, the belief that sometimes we write what we cannot say out loud, that friendship and connection are buoyed up by written words as much as spoken ones, that led me to blogging many years later. As a new mom I read blogs with the same intensity with which I had once consumed juicy notes from my girlfriends; later, as a less-new mom, I began contributing to the parenting blogging space, stacking paragraphs of prose one on top of the next and waiting nervously for the “Me too!” that came in the form of a comment or a share.

In junior high the need to connect authentically was fierce, overwhelmed as I was by slamming locker doors and a hallway that seemed to bulge at the sides with strangers. The feeling of a having a note tucked into my palm by a friend was a lifeline, and the reading and writing of those notes was more than just a way to pass the time in pre-algebra; it was a daily practice of empathy, a course in solidarity, and a reminder that I was neither alone nor superfluous in this new world.

New motherhood was so similar, now that I can look back on it from a safe distance. The same awkward new friendships marked by an intense need to compare and assess. The ill-fitting undergarments, the self-conscious foreignness of a changing body, and the persistent feeling that everyone is looking at you and judging. It’s not surprising, then, that I turned back to writing—that, in fact, so many new moms find outlet and expression through their words. 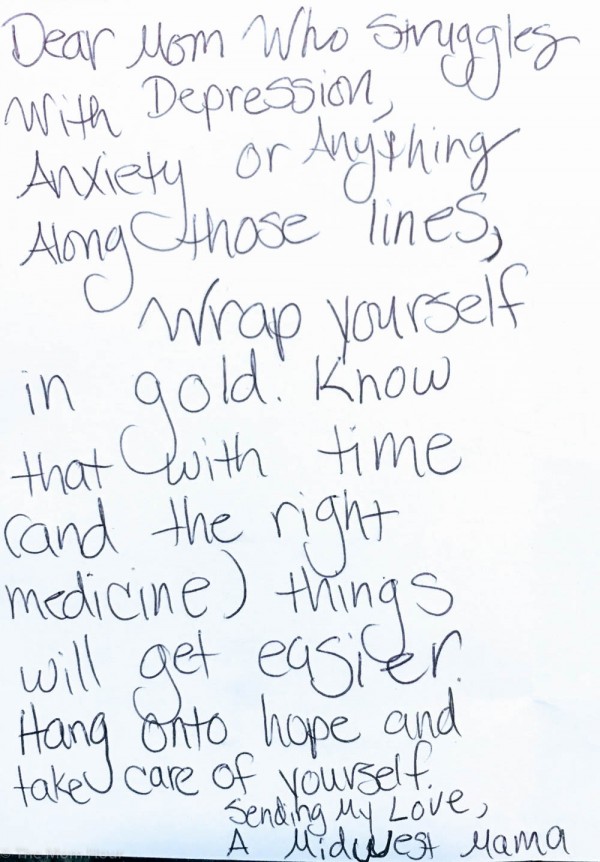 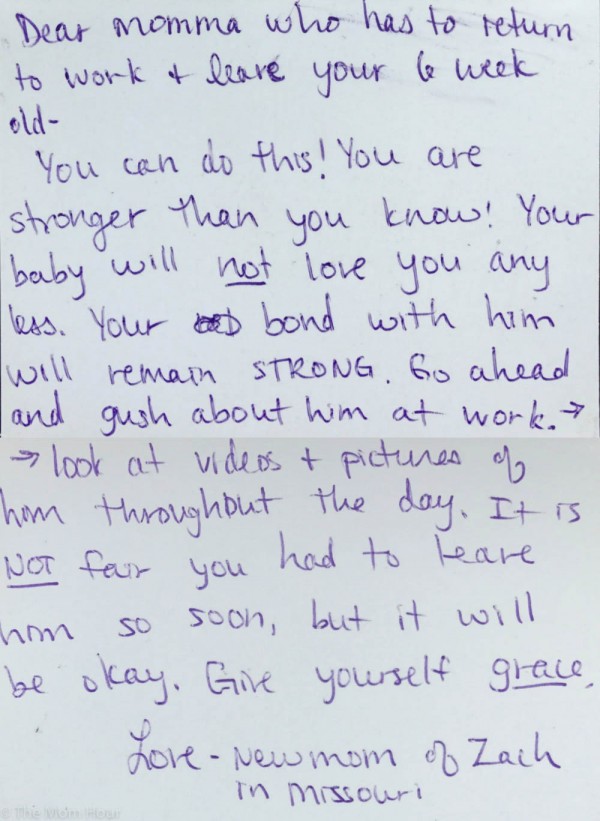 I was lucky, I realize now, to have people to write notes to in junior high. I wasn’t popular by any stretch, but I wasn’t alone. I had friends—some of whom I’m close with to this day—and friendly acquaintances, and while I didn’t get invited to every party, I went to enough to feel there was room for me in the world. I was lucky in new motherhood, too, after a couple of months of intense loneliness, to stumble into a support group and find accepting, welcoming friends. But in every junior high and at every new mom group there are those who aren’t as lucky, girls and women who feel lost and alone, who haven’t heard the validation of “No way! Me too!”

These are the women we had in mind when Meagan Francis, my podcast co-host at The Mom Hour, and I launched a Mother’s Day letter-writing challenge with our listeners. We’re both well past new motherhood now, but our audience is in the thick of it, hungry for reassurance, eager to connect. Our vision was that moms could write notes of encouragement to one another, sharing a message of a struggle they’d been through as a way to let others know it was normal, okay, and could be survived. We realized we were asking a lot of busy moms to set aside time to write out a letter by hand (let alone track down an envelope and a stamp!) and we hoped we’d get enough to share a few on Instagram and read them aloud on the podcast. 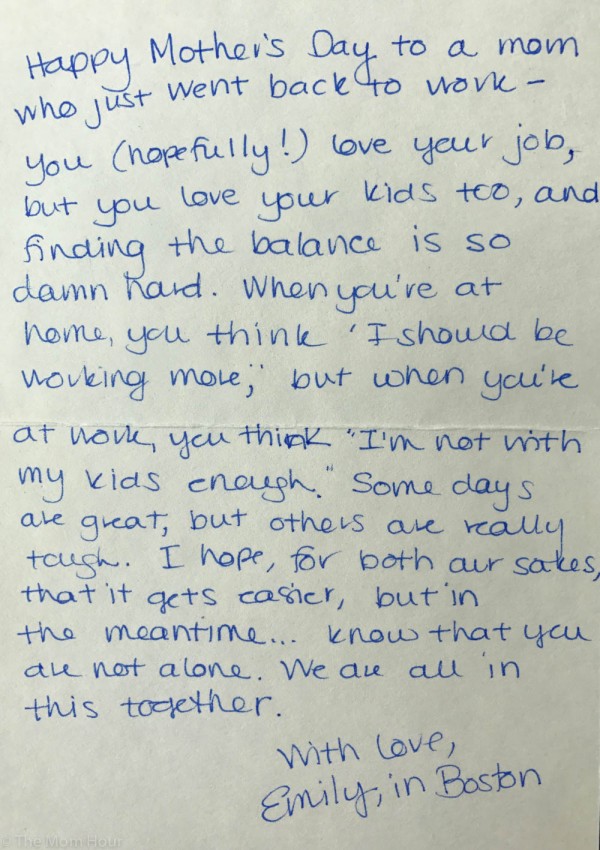 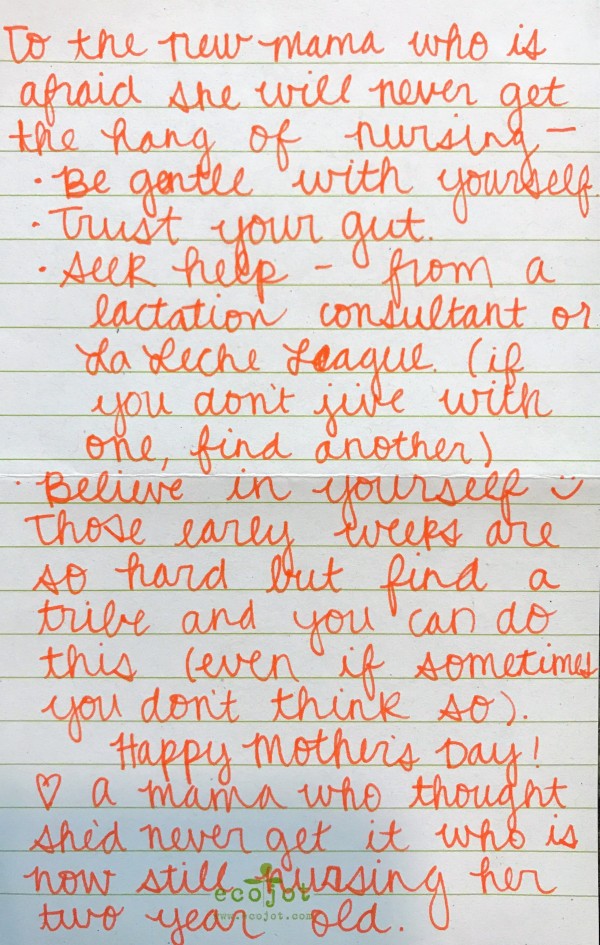 The first time I checked our post office box I found three envelopes, and since that day the letters haven’t stopped. The postmarks come from Illinois, Virginia, Washington, Canada, Australia, New York City, and everywhere in between. Some of them are written on cute cards or pretty stationary, but a lot of them, believe it or not, are scrawled hastily on lined, loose-leaf paper. I can tell just by holding a note in my hands that the writer had to stay up an extra hour at night or put off the dishes in order to put words on the page, and the fact that she did so brings tears to my eyes.

We’re not so different now than we were at twelve, are we? As moms we crave solidarity and sisterhood because without it this business is boring, lonely, and hard as hell. Without a BFF to exchange notes with in the hallway that fellowship is elusive, but as dozens of hand-written notes from moms all over the world have reminded me this spring, it’s not impossible to find. And, maybe most reassuringly, it can still arrive in the form of a note written on binder paper in ballpoint pen. 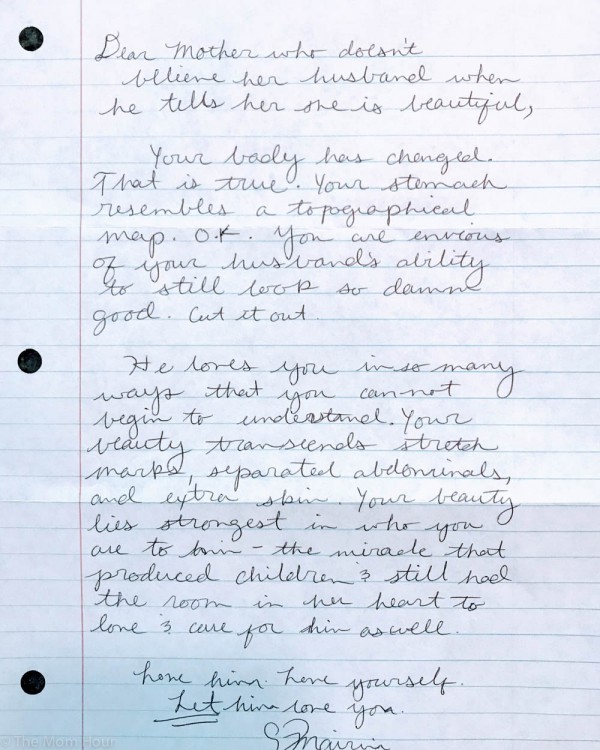 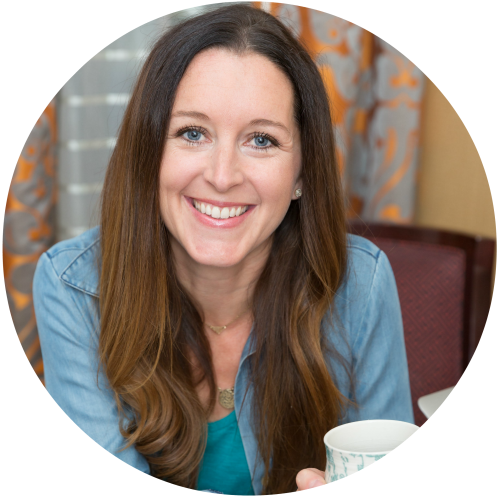 As a mom of 5, I've learned this one way to make kids more grateful
5 Hints to Help Your Kids Write Exceptional Essays
Write Your Kids a Letter
advertisement

As a mom of 5, I've learned this one way to make kids more grateful
5 Hints to Help Your Kids Write Exceptional Essays
Write Your Kids a Letter