Published by Carrie Cariello on August 17, 2016

It’s August now. The days are still long and hot and humid, but there is a tinge of autumn in the air, especially at night.

Most of you are starting to think about school again. You are reading over your supply list for seventh grade and wondering if your new teacher is nice or strict.

I wonder if you remember a boy named Jack from last year. He’s tall, and he wears glasses, and sometimes he jumps around a lot.

He bought his lunch from the cafeteria every single day.

For the annual science project he made an experiment with cotton candy to see if it would dissolve in water.

A lot of times he got mad.

He screamed swear words. He threw books. He banged his head on the wall and flapped his hands around his ears.

Sometimes when he got mad, the teachers had to take all of you out of the classroom so he could try to calm down by himself.

Maybe this made you nervous. Maybe you exchanged looks with each other as you filed out into the hallway. Maybe you worried about him, or you were scared of him. Maybe you knew about his autism so you felt a little sad for him.

Have you ever hated yourself? Have you ever been so embarrassed and ashamed of the way you acted that you felt dark and empty and all alone inside?

This boy Jack, he feels that way a lot of the time.

In a few short weeks, you will go to the middle school that was built in 2007 and is attached to the high school and meet your new teachers. You will eat your lunch in the cafeteria and check books out of the library, and in this middle school, you will start to dream of your future, grown-up selves.

Maybe you will dream of becoming astronauts, or ballerinas, or teachers or gardeners or lawyers.

Or of moving to Florida, or flying a plane, or backpacking across Europe.

This boy Jack, well, he just dreams of being normal.

He dreams about being like each one of you, with your easy smiles and your calm, still bodies.

He dreams of shedding his autism the way a caterpillar sheds his cocoon and turns into a bright, incandescent butterfly.

Jack is not coming back to public school this year.

Over the summer, his mom and his dad spent a lot of time researching academic options and meeting with people for an out-of district-referral. This was very hard for them. They never imagined their son would not make it in public school.

Their son is not making it in public school.

And the mom, well, she has tried to avoid this solution for as long as she could. See, she has five kids and she always pictured them like five little ducklings walking a similar path.

Now she has to pluck one of her ducklings out of line, and send him off to a school ten miles in the other direction all by himself.

This school, it only has thirty-five kids. It is mostly boys with just a couple of girls.

There is no cafeteria.

There is no big bus.

On the first day of his school, this boy Jack will climb into a minivan that has a sign attached to the top of it. The sign says School Bus, but it isn’t really a bus.

This is what hurts the mom’s heart the most. It hurts her the most because she remembers when Jack started first grade and he insisted on riding the big bus like his older brother, Joey. He didn’t talk as well then but still, they knew what he meant.

But it’s time. This mom, she knows this.

She knows that if she continues to clutch her dreams too tightly in her fingers, they will disintegrate like the luminous wings on her fragile butterfly. They will lose their color, and their softness, and turn to dust.

She has to let her dreams breathe, and move, and change.

She told him last Wednesday about his new school. They were driving home after the last day of his summer program, and he was talking on and on about his teacher for seventh grade and whether or not they should look for blue pencils.

She pulled the car into the garage and turned off the engine and turned to face him in the seat next to her.

Jack, buddy. Listen to me. You aren’t going back to public school.

They didn’t plan to tell him this way, the mom and the dad. They planned to sit him down at the long kitchen table and have a discussion so they could explain the reasons and outline the plan.

But if she had to hear him talk about seventh grade one more minute she was afraid she might go crazy. It felt too much like a big, ugly, snake-y lie.

Sitting in the cool, dark garage, it was as if everything around them—the dad’s old work boots and the broom on the hook and the soccer ball in the corner—took a collective breath together and waited.

This boy Jack, well, he simply dissolved. There is no other way to describe it.

She held him across the console of their red minivan and even though she could feel the hate and rage and shame radiate off of his body like the sun, he let her hold him. He doesn’t always let her hold him.

While he sobbed and screamed, she thought about all the things she wanted him to know.

But at some point, autism made his corners sharper and more rigid, and it became harder and harder to wedge him into the round, smooth games at recess.

She wanted to tell him how many nights she and his dad spent talking in the darkness—each playing something called devil’s advocate and tossing around options and trying to figure out a way to keep their precious son marching in his duckling line.

What if we paid for—

The school said we can’t do that.

How about if we try one more year?

I don’t think I can take one more year, and neither can he.

He’s going to be devastated

She held him while he cried big, wet tears. She stroked his soft hair and for a second he laid his head in her lap and she rested her head on top of his, and then all at once he lifted up and slammed into her chin and she bit her tongue very hard. Tears sprang into her eyes.

Oh, my Jack-a-boo, she thought in her head.

She wanted to tell him she was crying for all the things he wouldn’t have; a tuxedo for the prom and hot lunch in a noisy cafeteria and the chance to stand at the bus stop with his three brothers and one sister on the first day of school.

But she knows it is time—it is time to make his world small and cozy and warm. It’s time for him to relax in his cocoon, and just be the most perfect-est caterpillar ever. In his new school, he can blossom into a butterfly whenever he’s ready.

It’s August now. In just a few short weeks, you will make the climb up the hill to the middle school that was built in 2007.

As you sit in your new classrooms and listen to your new teachers, I only hope one thing.

Please, don’t forget this boy who tried so hard and who will never give up and who wants to be just like you. 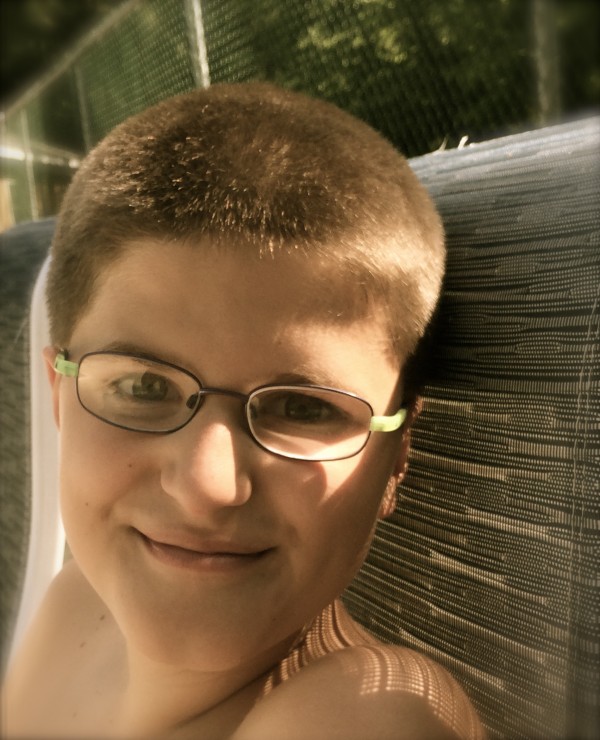 Carrie lives in Southern New Hampshire with her husband Joe and their five kids. She is the author of, "What Color Is Monday, How Autism Changed One Family for the Better," and "Someone I'm With Has Autism."

I am autism, and I have changed the rules
I Know What Causes Autism
Living in the Present as a Mother to a Child with Autism
advertisement

I am autism, and I have changed the rules
I Know What Causes Autism
Living in the Present as a Mother to a Child with Autism