Today's The Day: Life Lessons From a Wall Street Trader

Published by jthreeNMe on August 9, 2017

There is this man who you all should know about. He was an extremely intelligent man. He worked on Wall Street for most of his life until he moved to Florida and opened up his own business. He had a strong personality and a generous heart.

He is my father.

His favorite quote was one from Teddy Roosevelt. It goes like this:

“It is not the critic who counts; not the man who points out how the strong man stumbles, or where the doer of deeds could have done them better. The credit belongs to the man who is actually in the arena, whose face is marred by dust and sweat and blood; who strives valiantly; who errs, who comes short again and again, because there is no effort without error and shortcoming; but who does actually strive to do the deeds; who knows great enthusiasms, the great devotions; who spends himself in a worthy cause; who at the best knows in the end the triumph of high achievement, and who at the worst, if he fails, at least fails while daring greatly, so that his place shall never be with those cold and timid souls who neither know victory nor defeat.”

When you are the child of a hard-working, passionate, Italian, bond-trader from New York, you are raised a certain way. You are raised with certain beliefs encouraged upon you; with certain life lessons shared and exemplified for and with you. Here is a brief list, of only a few, of the many important life lessons taught to me by my father.

Lesson 1: Today's the Day. I've played soccer since I was 5 years old. I played recreationally and competitively, all the way up until I was in college. On the day of every one of my games, my father would tell me, multiple times throughout the day, "Today's the day, Nic!" What did he mean by this? Well, literally, he meant today was the day that I would score a goal. But, what was he also telling me? He was telling me that every day was a day to do something great. He was encouraging me to work hard, each and every day. He was teaching me that every day offers new possibilities; opportunities for greatness.

Lesson 2: Deal with it. There were many times in my teenage years where I would share with him that I felt something in my life was "unfair," to which he would tell me to simply, "deal with it". He told me the same when I started working a "real-world job" after college. Oh, you didn't get any instruction from your supervisor, "deal with it". You messed up an answer in your job interview, "deal with it". Law school is hard, "deal with it". I don't like your boyfriend who is eight years your senior, "deal with it". This was his rule -- either deal with it or get over it. And you know what? He was right. In life, you will be challenged and will be forced to deal with the hardships. By dealing with the obstacles, and getting over the fact that the obstacles were put there in the first place, you actually get through the obstacle -- funny how that works, right?

Lesson 3: Take chances. My father didn't always tell me to do this verbally, but rather modeled this for me, by how he chose to handle matters of business. Of course, there were times where his trades and business decisions didn't end favorably for him, but most of the time, they surprisingly, did. Or, maybe not surprisingly. My father took risks after researching and studying and doing his due diligence regarding the decisions at hand. In addition to such, he followed his intuition and his gut. The point is that his behavior and mannerisms with regard to work, taught me that if you want to win big, you have to take chances because if you don't, you will miss out on the possibility of greatness. He would agree with the contention that if something scares you, that's probably a good thing. Why? Because it is going to push you further than you thought you could go and make you braver than you presently believe you are.

Lesson 4: Exude confidence at all times. Although I was often annoyed by him doing this, I have come to see the importance of self-assurance in all that I do. If I don't hold strongly the belief that I am an intelligent and fully capable woman, who can do anything I put my mind too, then I won't make it too far in this world. He always told me that I could and would be anything that I want to be, from an Olympic soccer player, to a cut-throat lawyer, to President of the United States. And, you know what I think he is most proud of me for now? My confidence in my ability to parent (and parent decently well) three of his grandchildren.

Lesson 5: Be you and don't be sorry for it. This was something he was amazing at, whether I or anyone else was bothered by it. He was unapologetically himself; the man he was molded into based on his life experiences. He showed me and told me that I should just be me and that will always be enough. And you know what else is said? If "me" wasn't good enough for someone or some job, then they didn't deserve me.

Lesson 6: Have fun with life. My father lived his life with his happiness in mind. Only getting one life, that is your own and that is fleeting, is a great reason to ensure that you are experiencing joy at every turn you make and every chance you get.

There are so many more life lessons that he taught me, but who wants to read a post that is ridiculously long? I will conclude here with why the Roosevelt quote was his favorite.

He would tell you that it doesn't matter how many times you fail, or fall down, or make a mistake. What will forever count and be respected, admired and remembered about you, is the effort that you put in and your willingness to lose yourself in your passion. You will have ups and you will have downs in life, but what is worse than the instability of your journey, is not making the journey at all -- and he would never encourage that. 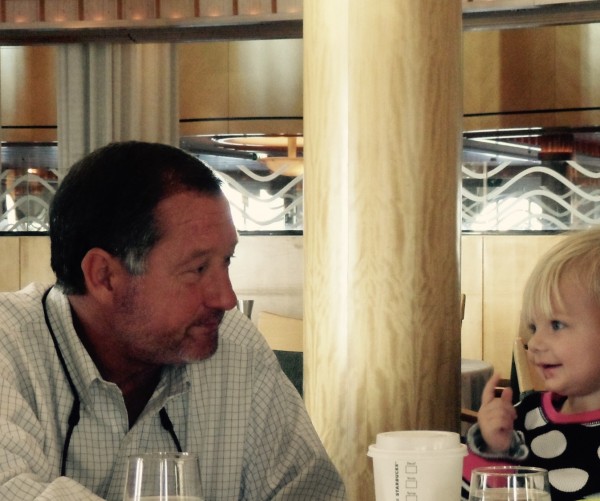