Published by Kim McDonough on November 19, 2017

When I became pregnant with my second daughter, I always knew I would have her early. You see, with my first daughter, I was induced at 37 weeks due to Preeclampsia and HELLP Syndrome. I was put on baby aspirin at 10 weeks pregnant to try to stop me from getting Preeclampsia again and I took that every day. When I hit the 28th week of pregnancy, I started having traces of protein in my urine and I knew we were in trouble. My OB started having me come in weekly from that moment on to check my blood pressure and protein levels. Then because my blood pressure was on the rise, I started to NST's 2x a week as well as a 24 hour urine catch. I was having to do all of this whole still taking care of my 20 month old and trying to take it easy. Then Christmas Eve when I was just 32 weeks, my blood pressure was through the roof and they almost kept me that night but I promised to take it more easy and they put me on Labetalol to see if that would help bring it down. A couple days later, the Dr wanted me to do yet another 24 hour urine catch since I had an appointment the next day. The next day, my daughter and I dropped the big jug of urine off at the hospital and we went to my appointment. My Dr knew it wasn't going to be long since my blood pressure was still on the rise and I was spilling more protein. She checked me and I was already over 1 cm dilated so she ordered an ultrasound for that day to make sure the baby was still growing on track and ordered for me to get the 2 shots to develop her lungs. She knew I'd have to be induced really soon and wanted to take all the precautions. I went for the ultrasound and baby was still on track which was great meaning she wasn't growth restricted. I went and got the first shot right after and went the next day for the second shot. Then it was just a waiting game.

The next day, New Years Eve, I just had the feeling that it was going to happen really soon. Then that night, my blood pressure was through the roof and I slowly started to get the same pain in my chest like I did with my first daughter (it feels like heartburn that just won't go away). I barely got any sleep and told my husband we needed to go to the hospital after my daughter finished her breakfast. As I was getting ready, my vision went extremely blurry for a couple minutes and I knew that wasn't good. We got to the hospital and sure enough, I was getting worse so they started the induction. At about the 12 hour, they gave me my epidural and started pitocin. As soon as the nurse walked out of the room, my husband decided to go get a drink since we thought it was going to be awhile (I was only 4 cm). Right after he stepped out of the room, my water broke. I paged for my nurse. She came, checked me out, and sure enough it was my water. She stepped out again, then a few minutes later, my contractions were back to back. I was already 10 cm. Everyone from NICU came and the delivering Dr was on her way. My husband made it back into the room just in time and I did 2 small pushes and out Scarlett came. She didn't cry right away and was so tiny. I had just hit the 33 week mark and she was 3 lbs 14 oz 17.25 inches. They checked her out real quick, wrapped her up and let me hold her for a minute just to get a picture before they took her to NICU.

The next 28 or so hours was a complete blur. I was on Magnesium to try to control my blood pressure so I wouldn't have seizures. I literally thought I was dying as I couldn't keep my eyes open and my mouth was so dry from not being able to breathe out of my nose (Labetalol swells your nasal passages). When I was finally taken off Magnesium, it took me a while to start feeling a little normal again. I was finally taken to NICU to see my daughter for the first time since I gave birth to her about 36 hours before. She was hooked up to the Cpap machine among lots of other wires to monitor her. The gently picked her up and placed her on my chest. I just sat there and cried while holding her and telling her how much I loved her. I also told her I was so sorry I couldn't keep her inside longer and to keep her safe and grow more. Scarlett was kept on Cpap for just another day then was breathing room air. She had to be put under the bili lights for a day or 2 for her jaundice.

I was finally discharged from the hospital January 5th (she was born Jan 2) and it was the worst day of my life having to leave her behind and leaving the hospital empty belly and empty handed. I went to the hospital to see her every night after my husband would come home from work (we had to take turns staying home with our now 21 month old first daughter) and wouldn't leave the hospital until after her 11 pm feeding. I cried every day driving to and from the NICU. She was mostly what they called an "Eater and grower". She had to keep her temperature and learn how to eat all her bottle. I was also trying to breastfeed her when I would go to see her. Finally on the 17th day of her NICU stay, we got the amazing news she was coming home the next day. On January 20th, we were finally allowed to bring Scarlett home and finally meet her big sister. It was the most amazing feeling in the world having both of my girls home with me.

Scarlett will be turning 3 this January and she is doing great! It took her until she was 9 months old to get on the growth charts, but now you would never know she was 7 weeks premature. She's almost as big as her big sister! It's so amazing seeing how far she's come. Preemies are so strong. 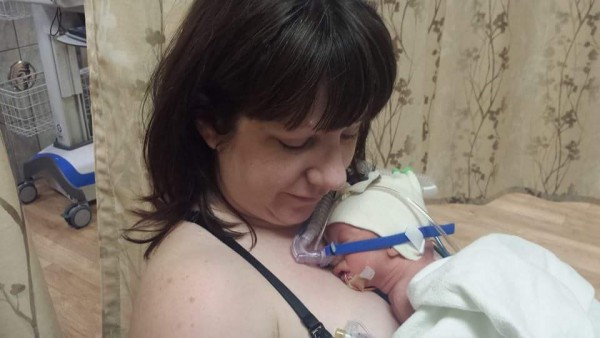 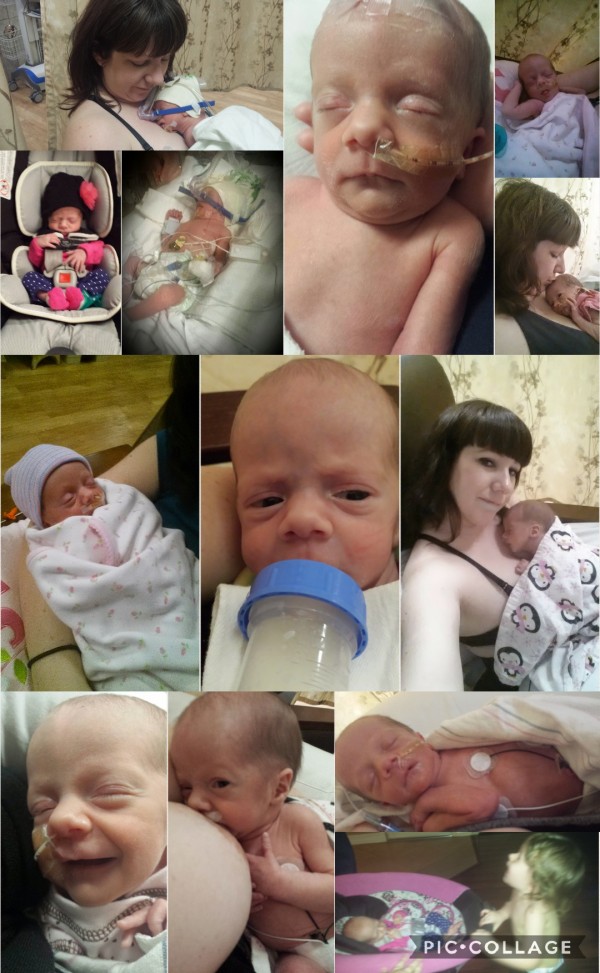 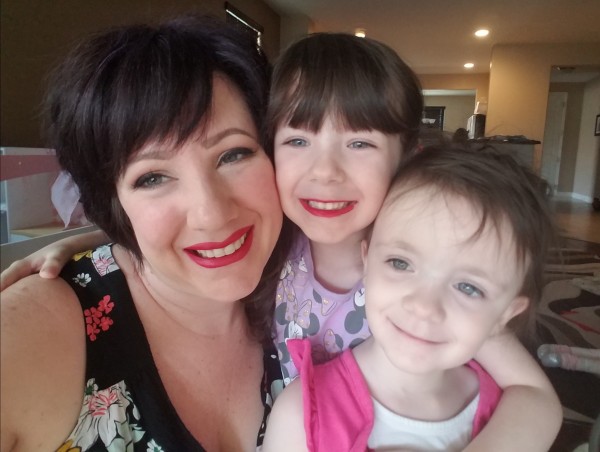