When the Insignificance of Motherhood Adds Up to Something Valuable 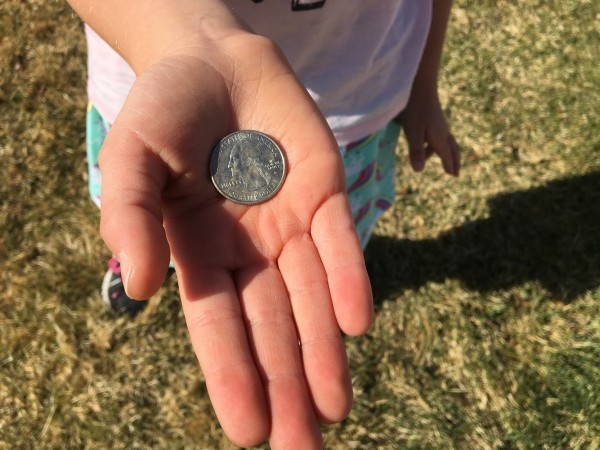 My daughter spotted a glistening treasure hidden in the grass while playing at the park. And while she was ecstatic over the acquisition of that shiny quarter, my excitement was feigned. I knew that her little treasure wasn’t all that significant and that it wasn’t worth much.

As she dreamed up an endless list of things to spend her perceived fortune on, I knew that this small amount of money wouldn’t allow her to buy much, if anything at all. At least not until she added a few more quarters to the one that had been stashed into her pocket.

And so it is with motherhood. Each day consists of tasks, many of which seem small and insignificant. It’s a series of moments that seem rather trivial, but when added up over time, they become so much more.

Picking up a baby who refuses to sleep. Again.

Trudging out of bed to make breakfast for the child who is up too early. Again.

Searching for a missing shoe that causes tardiness. Again.

Reading The Very Hungry Caterpillar. Again. Or Little Blue Truck. Or whichever book happens to be a favorite at any point in time.

Tucking children into bed. And then doing it again and again because of sudden unquenchable thirst or monsters in the closet or the sudden recollection of a toy that hasn’t been used in months.

The moments spent performing these duties sure don’t seem like much. The tasks are endless and can feel unimportant, and we question what the value is in any of it.

If our homes are not Pinterest-worthy, and we haven’t spent the entire day doting on our children, and we haven’t earned any money, and we haven’t volunteered at school, we feel like we haven’t contributed enough. We feel insignificant and we question our worth. We feel like our value is less than those who are noticeably accomplishing bigger things. We can feel small when each moment seems to hold nothing more than another unremarkable task.

When these tasks, these moments, are viewed individually, they don’t look like much. But when viewed collectively, they add up to nothing short of infinite love.

And in that, there is treasure for both mother and child.

A child who is confident in his mother’s love and a mother whose love has never fallen short.

And while the moments of drudgery don’t include a round of applause or a rewarding paycheck, they amount to something much larger. They add up to priceless moments that are demonstrated by love in action, and the value only increases over time. The mundane moments and tedious tasks are evidence of love both given and received.

And there isn’t a more valuable treasure than that.

This article was originally published at A Beautifully Burdened Life. Be sure to follow Jenny on Facebook for more on her incomplete family and imperfect motherhood.

This Year, I'm Giving Myself Grace on Snow Days
In Our Relationships, The Small Things Are The Big Things
Random Acts of Kindness, Potato Chips and More Grace Please
advertisement

This Year, I'm Giving Myself Grace on Snow Days
In Our Relationships, The Small Things Are The Big Things
Random Acts of Kindness, Potato Chips and More Grace Please