7 Times Batman v Superman Reminded Me How I Parent 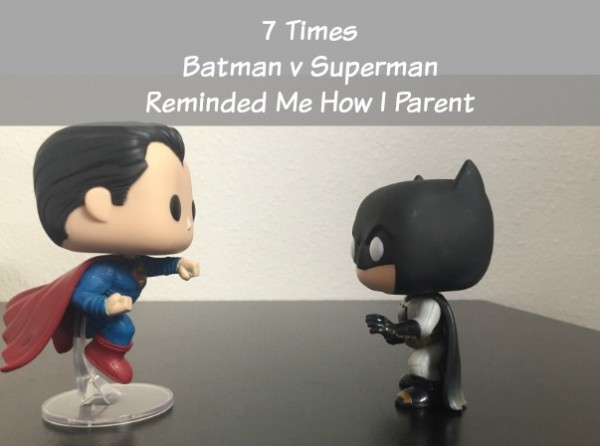 Were you one of the MILLIONS of people that ventured to the movie theater this weekend to watch Batman v Superman?

I owed my husband a “guy” movie date night…so, I went (who turns up their nose at popcorn and nachos).

It wasn’t until I was really INTO the movie…that I started to see the semblance Batman v Superman had on my current life. How SO many things paralled to things I see and do daily. I was seriously worried that someone had been filming my life secretly and I was just “IN” on the joke.

There were just TOO many coincidences…7 to be exact…that made me sit with my mouth WIDE open and gape at the similarities.

I AM that mom that let’s her boys wear costumes anytime during the year. It isn’t unheard of to have a 12 year old Spiderman riding a bike down the road, Batman fighting with light sabers, or even the Hulk smashing flowers in the yard. It’s just how my boys are wired. They’ve all had “dress up” chests full of costumes and loved dressing up. They get costumes for Christmas and birthdays, go to movies in full character dress, and ALWAYS have options for Halloween. So, seeing grown men on the big screen in tights and capes wasn’t anything extra special…I see boys in capes and tights all the time. That’s how I parent.

I had NO idea what a freaking batarang was until this so called “letter opener” arrived at my house (a free gift courtesy of “GameStop Points”–thank you very much). Eli had used Chris’ points to redeem for this free gift. Batman was slinging that thing into walls left and right during Batman v Superman movie. Those boys tried to tell me if was a “letter opener”. I knew I was going to throw it directly in the trash when I got home. Batarangs might be allowed IN the house–but, by gosh…they’re not staying long–That’s how I parent.

I write a Puff Pieces

So? Every time my kids do anything…I write a puff piece about them? So what? It’s EXACTLY the same way The Daily Planet likes writing about Superman and Bruce Wayne gets all jealous. You want to share what the awesome people in your life are doing…I can’t help it if not everyone wants to hear about it. (I mean…I don’t know why you wouldn’t–unless you’re grumpy like Batman). Sharing my Puff Pieces…that’s how I parent.

When Wonderwoman came onto the screen and had her lasso out and around Doomsday…I was reminded what it’s like to corral children to get ready to leave the house. I WAS Wonderwoman in that very instant–with the band on my forehead and hair blowing behind me. Yes…that’s exactly what it’s like getting three boys out the door and anywhere on time…just like that. Lassoing the crazy–that’s how I parent.

Looking for that Darn Spear

In the scene where Lois is looking everywhere for the cryptonite spear that she threw in the depths of the merky water–I was reminded of ALL the times we NEEDED one particular toy or sock. The one item that I HAD to find or the world would cease to function. Everything depended on ME and my Super-Finder abilities. Yes…in that moment, I was definitely Lois–the best looker ever! I SEEK and FIND–that’s how I parent.

As Batman’s valet…Alfred is always there…all knowing….with any and everything that you could possibly need. He could anticipate the need before there was a need. When Batman came in with a wrecked car..who do you think fixed it? When Batman tore his suit…who do you think sewed it back up? In those scenes with Alfred, I wasn’t Wonderwoman any longer, I wasn’t searching for THE thing like Lois…I was now Alfred. At a mere cry or whimper…for whatever my boys would need…I could be there instantly fixing whatever they needed at that moment. (crap…I liked being Wonderwoman a lot better).

PLEASE….when Batman asks Superman, “Do you bleed” before the most EPIC battle…I was like “ain’t nobody got time for that“. What mom out there has time to bleed? No mom…that’s who. We’ve got babies to look after, meals to cook, and a house to clean….we have to shower every once in a while, change our clothes, and actually go to work. Ain’t NO ONE got time to bleed.

Who wants to go out on a date night and just be reminded of what you do day in and day out everyday?

But…I am glad to know that homes across the world now know what I do on a daily basis.

Mom to three amazing boys Chris (21), Eli (13) and Isaac (8--angel). I love sharing stories about the boys and our life. VP of Development at MoveYourMountain.org and regular story teller/sharer.