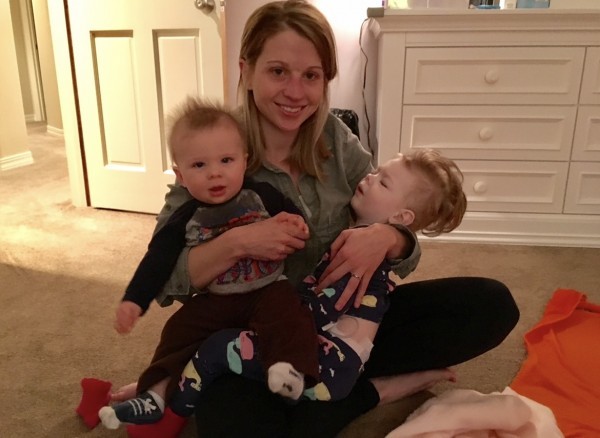 As a grieving mom, there are a bunch of dates throughout the calendar year that are significant, but there’s nothing to do with them. They aren’t as apparent as June’s birthday and death day, but they still carry weight all the same.

To name a few for me: there’s the day when I found out I was pregnant with June, the day I first saw her have a seizure, and there’s today — when she went on hospice six years ago.

This picture was taken shortly after June’s palliative care nurse confirmed she was dying, and it was time to officially transition her to hospice care. We knew this day was coming, and it wasn’t a surprise by any means. And you know what my first thought was when she told me? Relief. Relief that her pain would end. Relief that this catastrophic event we were anticipating would finally just happen so we could stop fearing it. Relief that we could finally sleep after nearly four years of around-the-clock care. Relief that our life would be somewhat normal again.

And then ... the pain set in about what having all those things would mean — a life without our precious girl and the guilt I had for feeling relieved of all those things if it meant I had to lose her. That guilt is something I still feel, but it has lessened with time.

I used to hate looking at this photo. I clearly just finished sobbing. My face is all red and then ... I’m smiling. Why was I smiling? All of a sudden, I felt frantic. I needed more photos of June and George and me and Matt. I needed pictures of my babies together. Time was limited, and I needed to document it. What does one even do when their daughter is dying? I’m sure the answer is different for each parent trapped in this heartbreak, but for me, it was important to capture time as best as I could through photos.

Six years later, the feelings may have lessened, but this image brings me back to how I felt that day, and I find honoring that helps me get through the day a little.

Genny Jessee is the co-founder of the June Jessee Memorial Foundation, a nonprofit dedicated to providing relief and support to children with devastating medically complex, neurological conditions and their families. She and her husband founded the JJMF in 2016 in honor of their brave daughter, June Jessee, who fearlessly faced the multiple, life-limiting conditions she endured. Genny is also the mom of two young boys and finds herself living between two worlds – that of her life with June, which was far from typical to her life now that is seemingly “normal.” You can read more of her work on her blog, Sorry to meet you this way, and find her on Facebook and Instagram.

Thoughts from my journal: When my daughter was on hospice
My bravest time: Letting June die
Celebrating the Month of June: Staying Connected with My Daughter by Helping Other Families
advertisement

Thoughts from my journal: When my daughter was on hospice
My bravest time: Letting June die
Celebrating the Month of June: Staying Connected with My Daughter by Helping Other Families

Elmo gets his COVID-19 vaccine shot: 'A little pinch, but that was OK'