Published by Jenny Albers on September 23, 2021 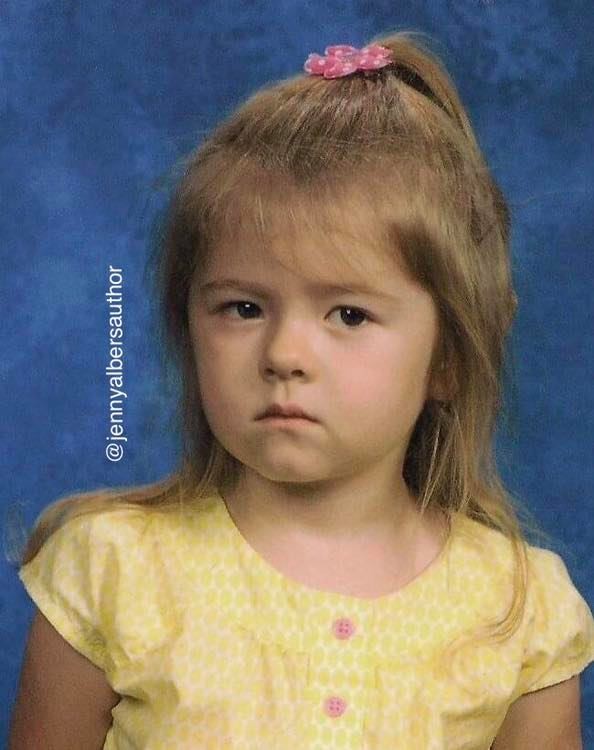 Her teacher held the oversized envelope tightly against her chest. She grimaced and said “I’m sorry” upon handing me the packet containing my daughter’s first-ever school pictures.

“Retakes are next month,” she continued. Her tone was a warning that disappointment awaited.

“They’re that bad, huh?” I responded, before lifting the flap to peek inside the envelope.

The teacher gave me a half-nod and said, “we tried.”

I assumed my daughter’s eyes were closed or her hair had streaks of finger paint in it. Heck, maybe there was even a booger dangling from her nose. I mean, you can’t really expect toddlers to stay clean and tidy for more than a fraction of a second.

“Geez, her teacher seems really concerned,” I thought, and wondered how a school picture could possibly be THAT awful.

I reluctantly slid one of the photos halfway out of the envelope and whatever concern there had been immediately dissolved.

I laughed. Hard. My heart was overflowing with all the best things at the sight of this image.

Because this is my daughter. The real her. Eyes open and unamused by whatever nonsense was taking place in front of her.

I imagine she was facing a photographer who was trying to coax her into a feigned smile by waving around a floppy stuffed dog, or making bad jokes, or acting like a total goofball in an attempt to gain her favor.

But really, it was probably the baby talk that caused this expression on her face. Because this child has always met baby talk with utter disdain.

Whatever it was, she will not be made a fool of. Such behavior is beneath her.

She saves her smiles for things that speak to her soul. And there are A LOT of them. Just not school picture day thinly veiled under the façade of fun.

She doesn’t do phony.

And that’s okay with me.

I just pray she stays that way.

It's picture retake day and emotions are high
Kids need mental health days too
We Can Do Better When It Comes To Toddler Sizeism: Here's A Start
advertisement

It's picture retake day and emotions are high
Kids need mental health days too
We Can Do Better When It Comes To Toddler Sizeism: Here's A Start