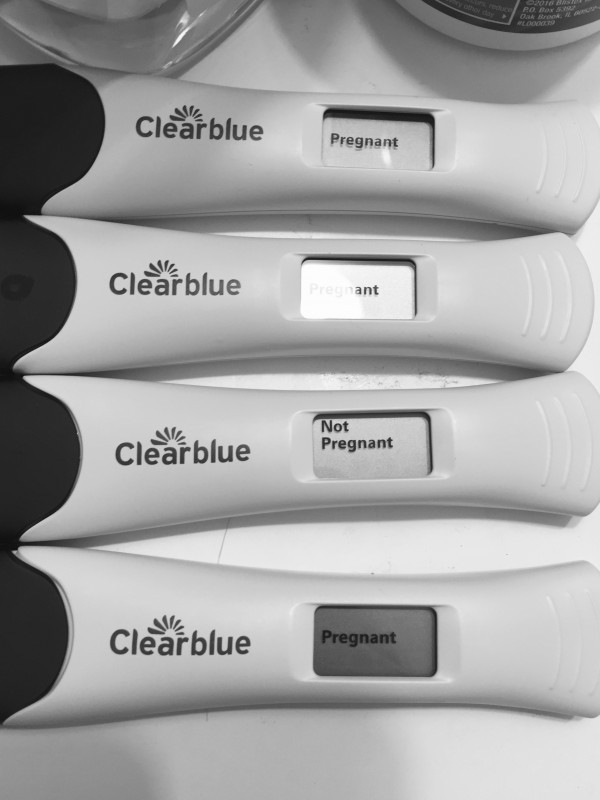 The word, in and of itself, is hard to write.

Now think about having one.

Now think about talking about it.

The kind you hide.

The kind you can't help to hide.

To have and to talk about.

But brave AF and strong as hell women, all over the world, sadly are experiencing them, often.

Some are being talked about.

It helps some to talk.

It's way too hard for others to do so.

Because not all women are the same.

Our bodies are not the same.

How and why each miscarriage happens isn't the same.

It's effect on our physical and mental being isn't the same.

And, the loss felt by each every woman who has experienced one is different.

But all miscarriages do have one thing in common; they are alike in this way --

they are hard to live through and with,

they change those who have had them.

They stick with you,

they deliver unrelenting emotional pain beyond the physical pain.

I was pregnant for a few short days with baby #4 only to have that "PREGNANT" reading turn to a "NOT PREGNANT" in a matter of 72 hours.

I had gotten excited.

I had told the kids.

And then I had to tell them that "sometimes a baby will fail to develop and be healthy," and that's what happened to Mommy and their maybe baby.

Some have them early.

Some have them late.

I won't pretend to know everyone's pain, but I promise to understand it.

To be mindful of it.

To listen if someone wants to talk.

To talk if it helps someone to listen.

To respect their grief.

To support them in it.

To love them harder through and because of it.

I don't know why we continue to use the term "miscarriage," 'cause I hate that word.

To me, it sounds like you're saying that the woman miss-carried and that she's to blame for her loss, and you know what, that couldn't be farther from the truth or more guilt-provoking.

Women don't miscarry their baby, in that, it's not their fault, but Lord knows they sure as hell feel like it is though the only thing these beautiful and strong as heck women miss carrying, is that dear sweet bundle of joy inside of them.

So, please recognize that when a woman miscarries, she will never not be carrying the pain of that loss within her, and I beg that you don't dare miss a chance at being there for her.

It could be you.

But you, her, and me, we're going to get through it, together, by talking when we feel like talking and listening when others do.

They are painful to have, live with, and talk about, yes.

But, there's pain because there was and is love.

And, by discussing the pain, we're acknowledging and honoring that love, and I think that's important.

ALL YOU NEED TO KNOW ABOUT RECURRENT PREGNANCY LOSS
What Did NBC, Mark Zuckerberg, Kathie Lee Gifford, and Hillary Scott Get Right About Pregnancy Loss?
Why We Should Talk about Miscarriage
advertisement

ALL YOU NEED TO KNOW ABOUT RECURRENT PREGNANCY LOSS
What Did NBC, Mark Zuckerberg, Kathie Lee Gifford, and Hillary Scott Get Right About Pregnancy Loss?
Why We Should Talk about Miscarriage