Always Step Up To The Plate

Published by Jennifer Lizza on April 5, 2018

This boy has an enthusiasm for life that is contagious. He knows every fact about every shark species on the planet. I've learned most of those facts over dinner, during car rides, while brushing my teeth, and while folding laundry. This boy has a thirst for knowledge. He's had that thirst since the day he could understand the words being thrown at him from everyone around him.

This boy has been using a marker to cross off day after day on his calendar for months. He's been counting down for this very day. This boy got that Aaron Judge jersey for Christmas, but it's been sitting in his closet waiting for today. I picked him up from school and during the short ride home he talked to me about how excited he was to watch The Yankees on opening day. There was a time when excitement over this might have caused me to roll my eyes, but today I saw a boy who has a great love for baseball and his excitement was contagious. Today I saw a dreamer, I saw a little boy looking up to players who were once sitting on a couch with the same excitement.

I don't think you can ever be good at something you don't love. It doesn't matter if you are a natural or not, if the love is not there neither is the talent. Teams win and lose. Players have good games and bad games. There will be home runs, strike outs, missed calls, celebrations, and disappointments. Throughout all the unknowns of baseball season, one thing remains the same, and that is this boy's undying love of America's favorite pastime. I hope he never stops dreaming. I hope he continues to step up to the plate with great determination. I never thought I could love a sport so much, but he taught me that I can. How could I not? 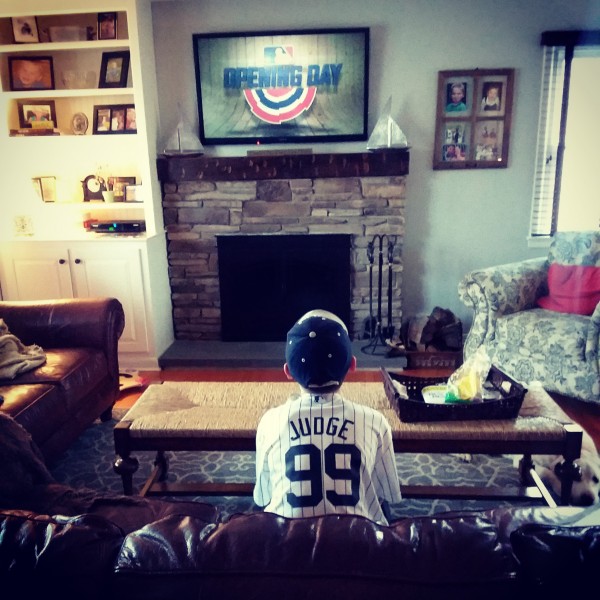 'My lost boy somehow found a way'
I let my son quit baseball: Here's why
Building Brotherly Love One Bickerment at a Time
advertisement

'My lost boy somehow found a way'
I let my son quit baseball: Here's why
Building Brotherly Love One Bickerment at a Time