Published by Noelle Elliott on December 6, 2017 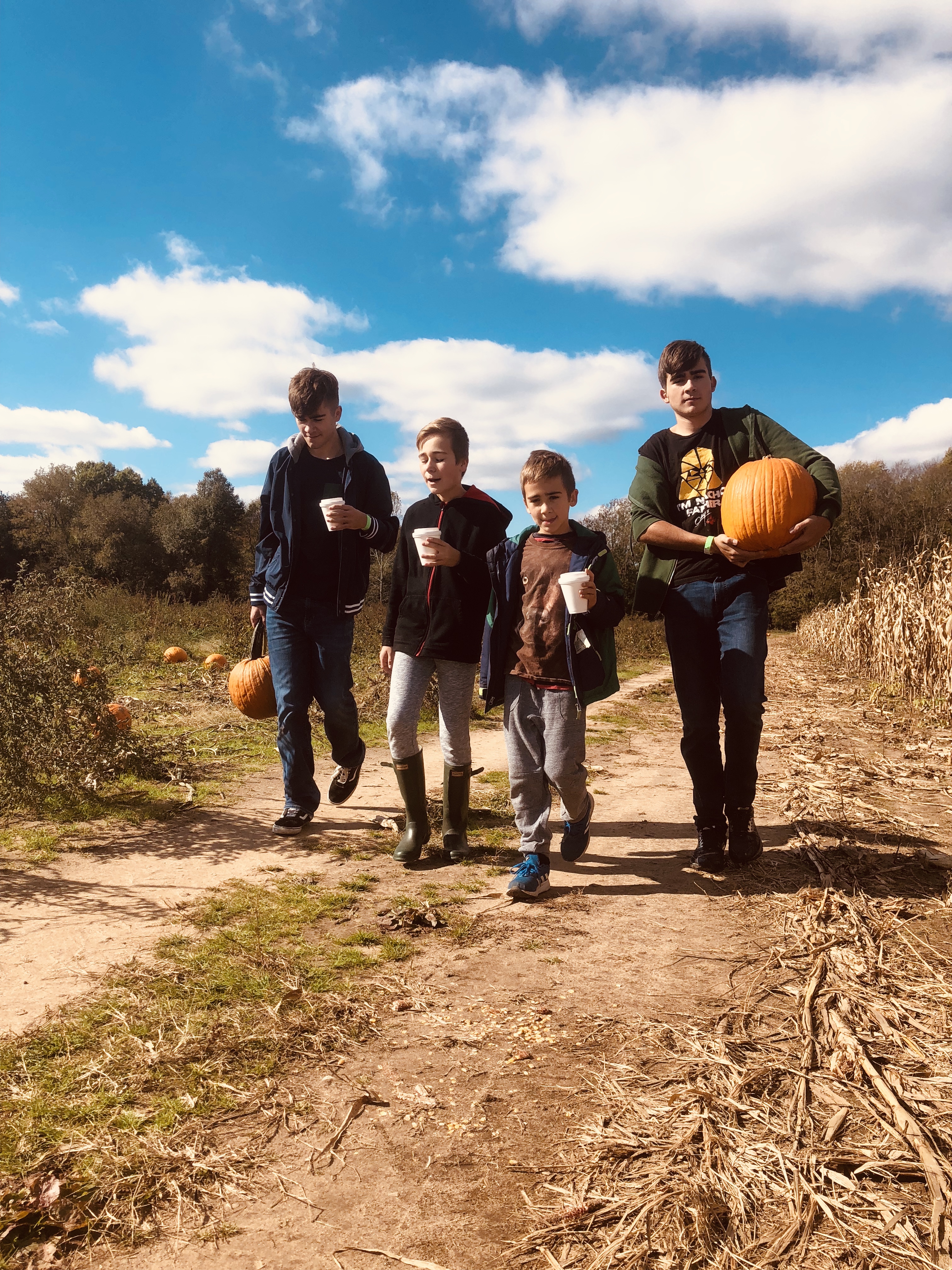 We have a cookie jar in our house full of cookies. My four sons have full access to it whenever they want. Surprisingly I don't have to restock it very often. I wish I could say the same for their milk consumption, which we have an entire refrigerator in the garage dedicated to milk and egg storage. The cookie jar has had a permanent space in our kitchen.

When my oldest son was four years old, he climbed on the counter, reached is chubby little hand in and took a bounty of Oreos for himself, ran up to his bedroom and ate them without my knowledge. At the time we had two additional boys and our oldest son's whereabouts were not always known. I discovered what he had done later that night as I cleaned up black vomit from his bed sheets, hair, wall, headboard, every surface imaginable. Clearly, he had exceeded his limit. He never ate that many cookies again.

Now I have two teen boys and two that will be teens before we know it.

Both of my teens are six-feet tall, shave and have deep voices. They may look older, but they act like fourteen and fifteen-year-old boys, and I'm happy about that. I mean, they yell at video games, wrestle for no reason and make questionable fashion decisions. And yes, that can get tiresome at times.

My husband and I are raising them with the cookie jar method. We trust them.

I know this is not the norm, but before you jump to judgement, I have to explain myself.

Being a teen is difficult. We all know this. But being a teen today is something that I can't even imagine. Everything you could discover, good or bad is in the palm of your hand. You can find out what party you have been excluded from in real time. You can actually make a poll to find out if people like you. Truthfully, sometimes being an adult in this age of social media is hard, I find myself longing for all the European vacations my friends are on and we are not.

I don't claim to understand how a teen navigates it, but I can be empathetic about their feelings surrounding it.

We do however give them guidelines and expectations about how to conduct themselves, in both the cyber and real world. And they haven't given us a reason to doubt them.

Teen conscious minds are not fully developed, but what is developed in our children's brains are their subconscious. This is the part of their brain that they have had since birth. It picks up on ques before they even speak the language. I read that in my first parenting book, and I never forgot it. If I'm responsible for nurturing their beliefs about the world, then I better get it right. Or at least try to.

Therefore, our expectations for them are based on love and respect rather than fear and intimidation.

At some point, our sons need to learn on their own that they are responsible for their own actions. And the consequences of those actions are sometimes exactly what it takes to teach them.

How in the world can we teach them to be trustworthy if we don't trust them in the first place?

I hear again and again when a boy makes a bad decision, that it is the fault of this or that, and that may be true, but deep down, he made that decision and has to live with it. My goal as a mother is to give them the tools they need to make good decisions and I influence this from my perspective, not as the only woman in their lives, but as a person who loves them so fiercely that I would give my life for them. What they know for absolute sure, is that we set guidelines to keep them safe. And they question these guidelines. And when they do, I don't just say "Because I said so." If they ask why I will tell them.

"Why can't I go to this party that EVERYONE is going to?" he says, "Because, the parent's are not home, and although I trust you, I don't want you to be in a position that compromises that trust. And, it's late and we are in our pajamas and I just poured a glass of wine, and I really want to watch this episode of Friends again."

When my oldest went to high school we said he couldn't go to sleepovers any more. If there was a scale of social, my son would be on the extreme end of social. He is uber social. He asked why. Originally we said it was just our family rule, which was partially true. So we decided to talk about it.

I'm new to this parenting teen thing, but if I can offer any advice, it is not just to talk about it, but to listen about it. Sure, I could stereotype my teen boys and say they don't say much, and that may be true at times but I found that when they are being talked at rather than talked to, they don't feel the need. They won't be heard anyway. And a crazy thing happens, when you listen, really listen, they will too. He explained that he liked staying up late playing Fortnite on two screens, listening to music with his friends in their basement. This is a true statement. I can relate, I recall having my best friend spend the night almost every weekend so we could prank call people, make mud face masks and read Seventeen magazine. I don't have to agree it is a good use of time, but I at least heard what he was saying.

While we were having this dialogue, I used this opportunity to share with him again, about my friend, Becky Savage. Who also has four sons. But one night, her two older boys made a very bad decision and took opioids mixed with alcohol. They were good boys who made a very bad decision and it cost them both of their lives. In one night, a mom lost two irreplaceable pieces of her soul. She has made it her mission to educate parents and kids alike, by starting the 525 Foundation. Look it up. It is incredibly powerful.

When I explained my concerns to him, he heard me. He saw how painful it was to think about and he saw how many people it negatively affected. I let him go to the sleepover. I also told him I would forgo my glass of wine that night if he needed me to pick him up, at any time, for any reason.

We want to raise boys that will be world-changers. But first, we have to show them that we trust them and give them the confidence to do just that. And that starts with us as leading by example, and not just telling them what to do. They know our expectations. They know there are consequences for their behavior. And they know first and foremost that we are their biggest advocates.

I'm teaching my sons that the world does not revolve around them, and that is a hard concept for some adults to even understand.I'm not saying this is easy. Especially for someone like me who has a strong need to control everything.

Freshman year was a really hard adjustment for my son, and truthfully us. He made some questionable decisions. He got in trouble. He was naive. At fourteen, he had a gun pulled on him and his shoes stolen a block from his school. Shoes he had purchased with birthday and Christmas money. When he finally told us what had happened, I asked him what was going through his mind. He said he thought about what I had said when he purchased them: "You know people have been killed for those shoes". He was not harmed physically, but it forced us to take a long hard look as to why he felt the need to buy those shoes in the first place and why we let him.

Also, how I talk to him.

I am fully aware that things could have gone a very different way that afternoon. I have played it again and again in my mind. But I'm proud of the way he handled himself. The world teens are navigating is more complex than the world I did. Fear is constant. I want home to be a reprieve from that.

I recently finished graduate school and I can assure anyone who asks, that I would not have been able to do that if the people I know and love didn't support me. Yes, going back to school is a good decision and easy to support. My point is, nothing could replace the snapshot in my mind, of my Mom and Dad's faces as I crossed the stage to get my diploma. They believed in me before I believed in myself. And I still need that, even as an adult who has spent more time living outside her home than in it.

I want to emulate that logic in parenting my teen.

I remember when I was a mom of four boys age six and under and thinking things would be easier when they were older. I was so wrong. This is much more complicated than my son binging on Oreos. But even after he made himself sick, I didn't take the cookie jar away. I didn't tell him I was going to monitor his cookie jar history. I didn't tell him he was bad. He learned that certain actions, even when they feel good at the time can have a negative impact. And I trusted that he wouldn't do that again.

Help!! -- 14 Ways for Moms to Raise Boys
It's My Dad
We are forgetting about our boys and that's not OK
advertisement

Help!! -- 14 Ways for Moms to Raise Boys
It's My Dad
We are forgetting about our boys and that's not OK