The Most Important (& Least Expected) Valentine You Should Give 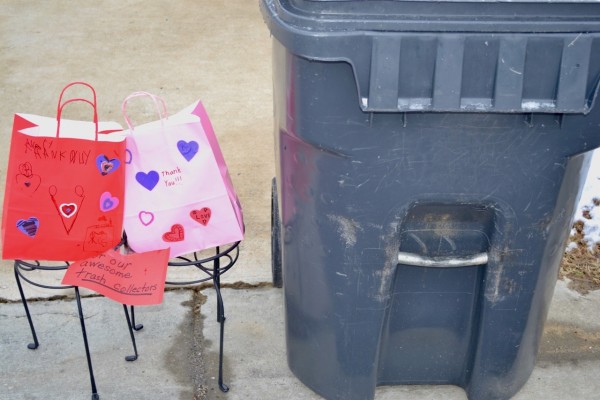 On Valentine’s Day, my daughters and I always gifted the usual people one would think of as a valentine, such as teachers, close friends, and family. Six year ago, a new tradition began—a tradition of going beyond our usual circle of familiarity to bring unexpected joy to someone’s life.

The idea transpired as my daughters and I were baking valentine treats for teachers and friends. The girls sat at the kitchen table lovingly decorating cards to accompany the baked goods.

“I have been thinking about our trash collectors,” I said unexpectedly. “How often do you think there is a surprise waiting for them next to the trash can?”

Without hesitation, my then seven-year-old daughter said, “Never.”

“That’s what I was thinking,” I agreed. “It’s easy to remember to express kindness and appreciation to our friends and the people we love. It’s harder to remember those outside our usual circle, but they are just as important. We should remember them too. Just imagine how happy we could make someone with an unexpected treat.”

My daughters were immediately excited about this idea. My older daughter decided that along with the baked goods we should provide “fuel” for the trash collectors. She suggested we bag up healthy trail mix that could give them energy to lift heavy containers all day.

My younger daughter was all about the decorating of the bags. She spent an hour with five Sharpies and twelve puffy stickers. (For several days after, her permanent rainbow fingers reminded me of the amount of love that had gone into the bags.)

I was amazed and pleased at their efforts. The children were putting as much time, thought, love, and energy into the gifts for people they didn't know as they did for their beloved teachers. Just the thought of surprising someone who didn't get many surprises inspired my daughters in ways I had not imagined. 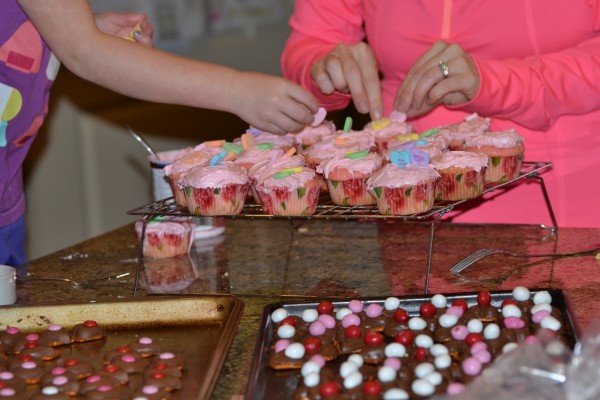 On the morning of trash pickup, each girl carried her bag out to the curb. Once the brightly colored bags were positioned next to the canister, the girls stood back in admiration and excitement.

They'd just walked upstairs to begin dressing for school when the roar of the trash truck alerted them. The girls ran to the window where they had a perfect view of the beauty that was about to unfold.

We watched a man who normally works at lightning speed take pause.

It appeared that we caught him off guard.

It appeared that a pink bag was the last thing he expected to find.

It appeared that he wasn't convinced these bags were for him.

It appeared that although there was hesitation, he accepted these gifts really were for him.

It appeared that it was just what he needed on an unusually cold and unlikely “snow day” in the South.

But I must admit, what touched me even more deeply than the awe-struck look upon the man’s face were the expressions of the people who had created this moment. Peering out the window with joyful smiles were two little girls who realized that despite having small hands, they held great power. In that moment, they realized they have the ability to put love in the most unsuspecting places. And when they do, the world as they know it becomes a little bit kinder and a little more hopeful.

What began as a mantra to silence her inner bully, only love today, slowly became the practice of Rachel Macy Stafford’s life. ONLY LOVE TODAY is now a book of bite-size reminders to help you remain anchored in love despite the stresses and distractions of everyday life. Each short entry (organized by seasons of life) serves as a re-set button directing you back to what matters most. Secure your copy of this highly anticipated book by clicking here. Signed copies of ONLY LOVE TODAY are available here while supplies last.

Rachel Macy Stafford is the bestselling author of three books: HANDS FREE MAMA, HANDS FREE LIFE, and ONLY LOVE TODAY. She is a certified special education teacher who helps people overcome distraction and perfection to live better and love more. For more: www.handsfreemama.com