Published by Jennifer Swartvagher on March 31, 2016

Josie has always been a bit of a mystery. She may have been my seventh child, but I had to learn everything anew.

From birth, she could not latch on and nurse like my other children were able to. The lactation consultant equipped me with a hospital grade breast pump and a length of tubing. I was instructed to pump every 2 to 3 hours and finger-feed on demand.

Drowsily, I lifted Josie onto the bed along with a bottle of milk and other paraphernalia. How easy it would be to nurse or offer a bottle. Each time my eyes grew heavy, I quickly snapped awake. If I wasn’t pumping, I was feeding her. At night my thoughts were consumed with worry that I wasn’t doing enough.

How would I be able to continue this routine and still care for my other children?

My concern didn’t end there. Josie's nose always sounded congested. The constant whistle coming from her bassinet kept me up all night. We were constantly spraying saline into her little nostrils. The aspirator became our best friend.

The congestion started to morph into something more. I felt like a first time mom as the doctor patted my arm and said, "Just a cold."

On our third visit to the pediatrician’s office, the receptionist took one look at my face and took us back immediately. I unbuckled Josie from the carseat, surprised by how limp she was. The nurse ran to the door and called for help. Soon, the exam room was filled with doctors and nurses hovering over my limp, grey baby. The pulse oximeter showed Josie's O2 saturation was 40%. The pediatrician shouted, "Call 911!"

Before I knew it, I was in an ambulance with Josie. A few hours later, I kissed my baby goodbye right before she was loaded on a helicopter en route to the children's hospital. I spent over an hour not knowing what was going on, drinking in the smell of Dreft as I sat in the car holding a bag filled with Josie's prized possessions and fuzzy pajamas.

Josie had suffered an Apparent Life Threatening Event. Now, we needed to figure out what caused it. 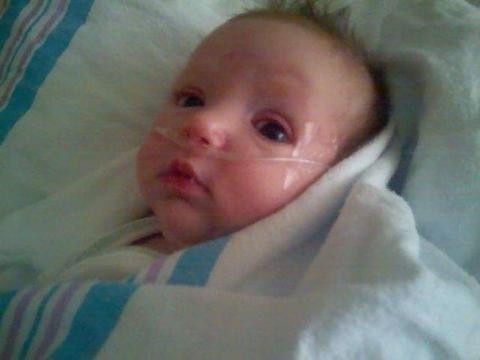 The large metal crib held my tiny baby, cocooned in a little nest. There were so many wires attached to her. She slept soundly despite the constant beeping.

Would I ever sleep again?

The diagnosis was high grade reflux. Along with thickened feeds and omeprazole we found Josie was most comfortable sleeping on an incline and so began my nights in the living room.

Josie slept in the bouncy seat or the swing and I camped out on the couch. I mostly slept with one eye open, constantly checking to make sure she was still breathing. For months I lived in yoga pants, formula stained shirts, and a messy bun. I constantly jolted awake, comforted by the rise and fall of her chest. My nights were filled with thoughts of medical bills and early intervention. Josie recently turned seven and I don’t think I’ve recouped those missed hours of sleep yet.

My sleepless nights didn’t end when the reflux resolved. These days, as soon as the lights turn out, my mind still runs 1,000 miles per minute, but it is all worth it. I find myself tossing and turning thinking about bake sales, report card conferences, and whether or not I remembered to sign that permission slip. There are nights when I find myself back on the couch, nebulizer by my side, tending to a little one with an asthma flare. I wait up until curfew to make sure everyone is tucked in safe, even the adult children, before I turn in for the night.

If you could find a written job description for prospective parents, it would clearly state, “Must be able to function on as little sleep as possible.” I’m surprised more expectant moms don’t register at Starbucks. A lifetime supply of coffee would be a welcome gift at any baby shower. Most days I am running on caffeine and a sheer love for my children.

One day the house will be quiet, and I will sleep. For now, I am enjoying the beautiful chaos.

5 things I Wish I Knew...
Throw away that clock!
Sleep What's That?
advertisement

5 things I Wish I Knew...
Throw away that clock!
Sleep What's That?