Bedtime is the Worst!

"Set up a solid bedtime routine," everyone says. "It will help the baby sleep," they say. "Routines help kids know what's coming so bedtime will go smoother," they say. And they're right. As usual, conventional wisdom wins.

But what they don't tell you is that the glorious bedtime routine that works, that gets your kid to sleep without fussing, whining, arguing, struggling, will eventually become your hell. Like a prison. Or a boa constrictor on your neck, getting tighter and tighter each night. And the more you try to get away from it, the tighter it holds on, the more controlling it becomes. And eventually you realize there's no getting out of it until your child grows up a little. Or moves out. 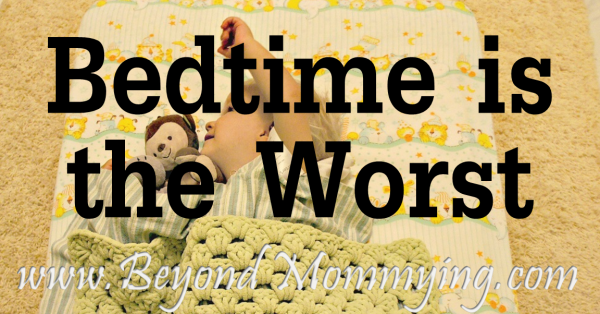 What started as a "let's put one animal here and another here to snuggle you" became an obsession and one only I knew. One that couldn't be communicated to other caregivers when I was away. One that resulted in numerous failed nap times and too much frustration for both baby and daddy, grandma and grandpa.

It eventually morphed into needing a burp rag laid just so across the left shoulder and covered up with two blankets. Hands must be at the sides and feet completely covered. It's not just so? Ensue mass hysteria.

What started as a nice idea, read a book before bed, when we moved into our new house has become a life or death priority. No matter how tired I am at the end of a long day or how loudly the baby screams, all hell with break loose if the toddler does not get to read a book before bed. Despite the fact that he spends most of book time rolling around on the floor now.

The lights and sounds machine that used to be required for sleep is now a no-go and will cause a fit. And heaven forbid you leave the Spider-Man light plugged in at nap time, he (apparently) is only needed at bedtime.

And the door must be open at night time. A new demand that is repeated throughout the day anytime bedtime is brought up "door open mama?"

I've said it, too, to unsuspecting new mommies looking for advice: "get a good bedtime routine going and you'll be golden!" But this now weary mommy of a mildly OCD toddler won't be making that mistake again!

This was previously published on Beyond Mommying.

Untitled
Ending the Bedtime Battle: 5 Tips For Winning the Witching Hour
Toddler Bedtime Routines- How to Stop Your Toddler From Delaying Bedtime
advertisement

Untitled
Ending the Bedtime Battle: 5 Tips For Winning the Witching Hour
Toddler Bedtime Routines- How to Stop Your Toddler From Delaying Bedtime