One Sunday morning, my son was on a mission to finish his bottle of orange juice. I don’t know what inspired this undertaking, but he decided he was going to work really hard to finish it. On this particular morning, my daughter had a nasty cold. Crankier than usual, she would start crying at the slightest provocation. It didn't help that my kids were arguing over toys and intentionally provoking each other. I was trying to be as patient and understanding as possible in dealing with both children, but I could sense that I was reaching my breaking point.

My son was going back and forth between playing with his cars on the windowsill and diligently working to finish his orange juice. He’d randomly call my attention to the bottle on the table when he’d take a few more gulps. When he finally finished the bottle, he ran up to me in the kitchen, smiling and waving the bottle around to show me it was empty. Apparently, he didn’t get every last drop out of the bottle. Orange juice started flying all over the kitchen while he was proudly waving that bottle. And…. that was the last straw. I exploded on him, “Look at what you’re doing! You’re spilling orange juice everywhere! Stop!!!” He immediately burst into tears, and even managed to say something really heart-wrenching like, “I thought you would be proud of me!” I think those were his exact words.

I brought him to sit down on the couch and calm down. In those few seconds between my blow-up in the kitchen and sitting down on the couch, I was able see through my anger, my need for control, my guilt over yelling at my kid. The first words I said to him once I sat him down were something along the lines of, “I want to apologize to you. I’m sorry. I’m sorry that I started yelling, I just got upset about the juice spilling, but it’s not that big of a deal.” His crying slowed and he was just listening to me, probably a little surprised at this role reversal. Then I asked him, “Can we have a do-over?”

Sometimes in our house, we have do-overs. Usually it’s my son that asks for the do-over, but in that moment I decided there’s no reason why parents can’t have do-overs as well when we need them. We went back into the kitchen, I washed out the orange juice bottle, and he showed it to me again. This time I gave him a hug and told him I was proud of him. He was smiling and satisfied with the do-over.

I’ve noticed that kids happen to be naturally awesome at forgiving and forgetting. They don’t hold grudges. They give lots of unconditional love and grace. For some reason, the hardest person to forgive--at least for me--is myself. What if I were able to forgive myself as easily and completely as my son forgives me?

At a yoga class recently, the instructor was telling us about a journal prompt where you use the sentence starter "Today Would Be Great If..."

Today would be great if... I could forgive myself the way my son forgives me. 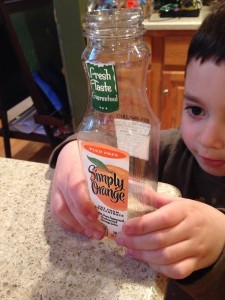 Pamela Boccia is a mom, special education teacher, Huffington Post blogger, and dark chocolate addict. She writes about parenting as a journey for the spiritual warrior on her blog zachellamom.com/wp.

CONGRATULATIONS WELCOME TO THE WONDERFUL WORLD OF MOTHERHOOD!
What Happened?
In Our Relationships, The Small Things Are The Big Things
advertisement

CONGRATULATIONS WELCOME TO THE WONDERFUL WORLD OF MOTHERHOOD!
What Happened?
In Our Relationships, The Small Things Are The Big Things