These days, people can buy just about anything. Just charge it to the credit card even if you don’t actually have the funds to pay for it. What’s not so common is the person who saves for something they want, earns the money, and pays for the item with cold, hard cash. There is a significant difference between the two and it’s a distinction worth teaching to our children. One often comes with remorse, the other with respect. Our family had the opportunity to experience this first hand not too long ago.

Something rather surprising happened in our household recently and I never saw it coming. It all started about a year ago when I stupidly detoured from my normal travel pattern through Target and dangerously ventured over to the toys and electronics aisles. As expected, pandemonium broke out.

All four kids ran for the nearest interesting toy and started grabbing them off the shelves (at least the ones that weren’t hardwired to the rack). A chorus of “mommy, can we buy this?”, “mommy, I want that”, “please, please, please” broke out and I went into autopilot mode, constantly repeating, “no, not today”, “put it on your Christmas list”, “you want it, you buy it”. I mean, even my one-year-old waddled his way over to some Paw Patrol action figures and started chanting, “mine, mine, mine”.

Now, this scene is not the surprising part. It’s actually quite common for us, which is why I usually deliberately avoid this entire section of the store. But, it was getting close to the holidays and I did think I could safely wander that way just to see what’s out there. The part that was surprising, and at the time still unknown to me, was that my 7-year-old son took my robotic response, “you want it, you buy it” seriously!

He had his sights set on an Xbox and there was no way I was forking over the cash for that $300 luxury item. The whole ride home, and for the next several days, I could see the wheels in his head turning. He would occasionally ask me to remind him how much it cost and start counting his money….$57 was about how much he had in his “save” and “spend” jars at the time.

One day, after doing a little online browsing with my husband, he informed us that he was going to save up for his Xbox. My husband even drew him a little diagram with a thermometer-type thing on it that he could color in as he saved more money. They figured out how much the Xbox, plus an extra controller, and a game would cost all together, and hung that chart up in our kitchen.

I kind of shrugged this whole thing off and thought that something enticing would come along that my son would buy that was cheaper and it would take years to save this much money. Maybe someday for Christmas all the grandparents could pitch in a little money and we could get it for him.

But this little boy was determined. A pattern evolved where he’d periodically count his money and ask for extra jobs to do around the house to earn a little more. When his birthday came, he put all of that money in his save jar. When we’d go to see the grandparents, they’d give him a few odds and ends jobs as well.

I won’t lie, I was totally impressed with his discipline. I certainly didn’t have that at his age and still barely have it as a grown adult. But, he kept at it.

One day, he was counting his money again and he was only about $40 short. I wanted so badly to just take him over to buy it anyway and give him the last bit so he could finally have his treasured possession. But something stopped me. I suddenly realized that it wasn’t simply about buying the Xbox, it was about earning it. To swoop in now and just give him the rest of the money would actually rob him of the joy and true satisfaction that was awaiting him at the finish line. I realized he needed to do this for himself and I knew he could.

Finally, on October 19th, 2016, my son walked into Best Buy with a giant wad of cash, selected his Xbox (he ultimately purchased the Xbox One….I have no idea what the difference is between them all), carried it over to the cashier, and proceeded to pay for it ALL BY HIMSELF! 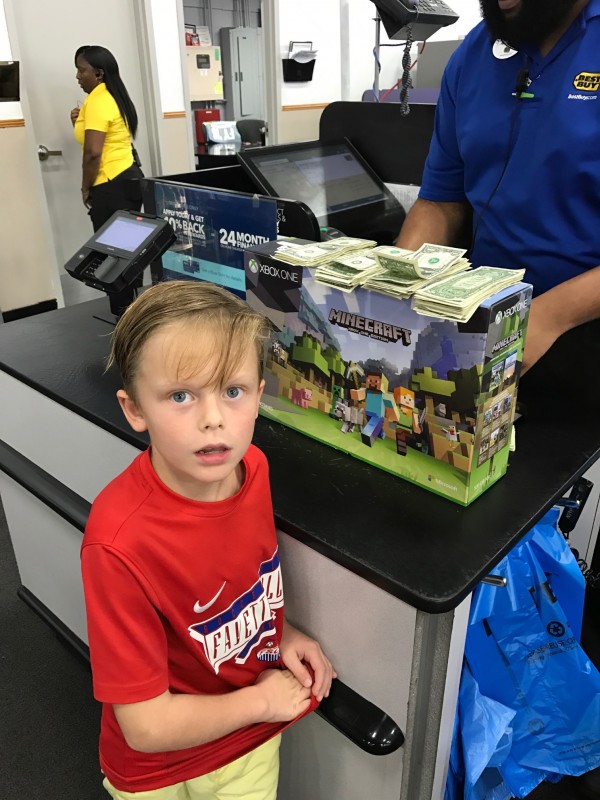 I promise you Best Buy didn’t know what was coming their way (though my husband did warn the cashier that there was going to be a lot of cash to count). They actually had to call a manager over because there was “so much cash”. Other cashiers started to come over and watch because, as they told my husband, they had NEVER seen a 7-year-old come in and buy his own Xbox!

I was so proud that I cried when I saw the videos my husband took of the whole process. I was actually out of town that week so I missed the event but I’m so thankful we have the videos to remind us of what he accomplished. I mean, he will forever look back and be proud of this purchase. That’s huge! I can’t ever remember saving my money for something like this and the only purchases I remember are the ones for which I had buyers remorse.

I learned so much from watching this little boy earn and save his money for something he truly wanted. In the end, it was about so much more than the money and what he purchased with it. Someday the Xbox will no longer work and he’ll move on to other things but what will never leave him is the self-respect and confidence he developed that money simply can’t buy.