Published by Jennifer Swartvagher on May 4, 2018

“Just put me in the ground with him.”

The fairy tale existence I had once enjoyed came to an abrupt end with the preterm birth and death of my son. In my naivety, I thought the hardest part would be leaving the hospital with empty arms. No one warned me about the fog of depression that would envelop my very soul.

Convinced that I had somehow caused the death of my baby boy, I deemed myself unfit to mother. When I wasn’t blaming myself, I lashed out at others. The weight was too heavy for me to bear, but I wouldn’t let anyone dissuade me. This loss was a punishment that I alone had to bear. The guilt I felt started to overshadow my grief.

As soon as the kids were in bed and silence filled the house, my sorrow became unbearable. I began to dread the nighttime. Waves of anxiety started to build up with the sunset. In the darkness, my worst fears came to light. These thoughts turned me into a helicopter parent of the worst kind. Constantly on guard, I worried my living children would die as well. There wasn’t enough bubble wrap in the world to keep them safe.

Thoughts of my baby being cold consumed me. I wanted to be buried next to him so he wouldn’t be alone. If I had enough energy I would have driven myself to the cemetery. I envisioned myself digging the cold earth with my bare hands and laying on top his casket. I just wanted to keep him warm.

One morning, on the way home from preschool drop off, I contemplated driving into oncoming traffic. Just the mere thought surprised me. This wasn’t going to be the end of my story. Seven little people looked to me for comfort and I knew I couldn’t leave them. Their world had been rocked as well. There would be no sweet baby brother to dote on. They needed a mother who could be there for them and, frankly, it was exhausting.

Distraction became my coping mechanism. After a long reprieve from cooking, thanks to the kindness of friends and acquaintances, I headed back into the kitchen. My children and I spent hours around the stove together. As we planned meals and rolled out dough, the memories we created started to fill the emptiness I felt inside. Sorrow was slowly replaced with laughter.

In those months after my loss, I learned to take extra time to memorize the little things that I had taken for granted in the past. To this day, I can still recall the soft pink sweater my daughter wore and the way her pigtails bounced as she hopped up on the step stool to pour sugar in the mixing bowl. Lots of little hands were excited to help stir the batter, and I didn’t even freak out when there were eggshells in the batter and flour on the floor.

This glorious chaos helped give me back my life.

It may sound funny, but cookies, chicken pot pie, and homemade applesauce created the threads that sewed my heart back together again. When I left the hospital that cold February morning with nothing more than a receiving blanket, I never thought I would smile again. While there was still much grief I needed to get through, I found a way to see through the darkness and strengthen the bonds of my family. 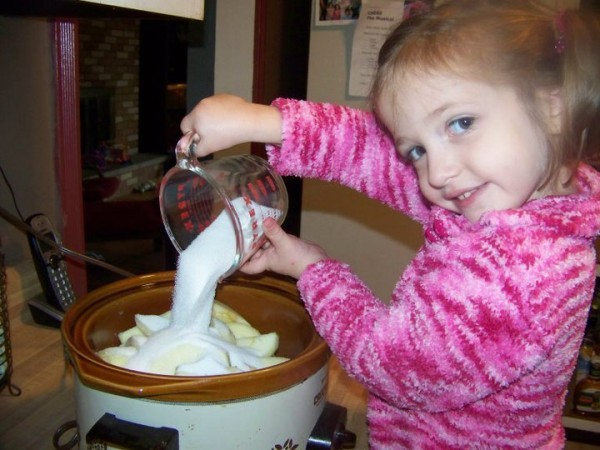 To the nurse who held my stillborn baby: 'I will never forget you'
What do I say? Expert advice on helping friends and family cope with the loss of a baby
The Secret Competition in the Baby Loss Club
advertisement

To the nurse who held my stillborn baby: 'I will never forget you'
What do I say? Expert advice on helping friends and family cope with the loss of a baby
The Secret Competition in the Baby Loss Club