He never wanted balloons, I did

Published by christie cuthbert on June 18, 2019

When my oldest was turning two, I planned an epic birthday party for him. It was a “Balloon-a-Palooza.” We blew up hundreds, stringing them with fishing line and hanging them throughout every room to make it look as though they were floating on the ceiling. The entire house was decked out in primary colors from top to bottom. It was a visual delight.

We had a face painter come, and we offered goody bags filled with bubble wands, sidewalk chalk, and more colorful things. My mom baked a rainbow layered cake from scratch that was taller than my son was. She blew up so many balloons that her lips swelled up like Lisa Rinna from a latex reaction. God Bless mamas, right?

It took me an entire week to set up for the party.

And my son was miserable and cried through the entire thing. 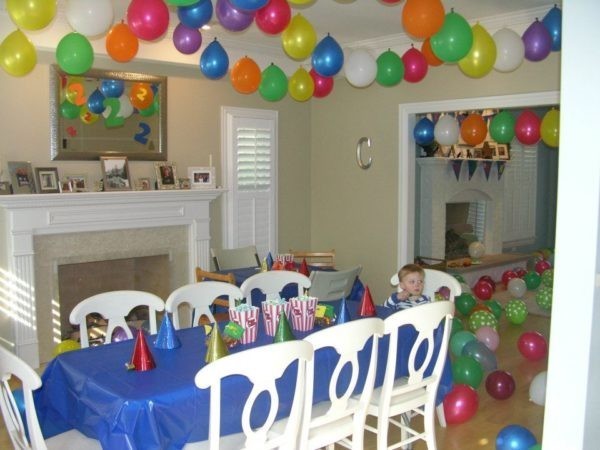 No one — not us, not his grandparents, not friends from school, nor neighbors he loved — could get that child to smile that day. He was absolutely overstimulated, overwhelmed, and miserable.

We have pictures of him crying as a room full of people sang “Happy Birthday.” It was such an oxymoron of a scene. It still makes me sad to look at those photos. He hated every minute of the party, and it was a major wake-up call for me about what truly matters when our kids are little.

When I look back at it now — and really, even weeks later — I realized that I intended for my son to have a fun party, but ultimately, the spectacle was more for me. I assumed he would enjoy this elaborate shindig I had planned, because that’s what I would have loved as a kid. But at that time in his life, it wasn’t his jam. He would have been completely thrilled with pancakes with Mom and Dad and a trip to the toy store. He didn’t need the pomp and circumstance of turning 24 months, and he hated the attention. He just wanted his people, which was my husband and me. That, and a cupcake, were all he truly needed.

Many of us moms with littles get caught up in the game. We all watch what our friends do on social media and think, Well, shoot, my kid needs that level of fabulousness too.

But in reality, they often don’t. They need you and a single cupcake. That is seriously it. And by the way, a two-year-old won’t remember a single moment of his/her birthday or the elaborate celebration you create. Parties and life events when kids are two create happiness in the present for them; the lasting memories are only for you.

The following year, we went to a train-themed restaurant for dinner with two of his little playmates, and that was it. I made him a cake with Thomas the Train riding on Kit Kat track ties, and it was as if he’d won the lottery. His birthday was finally about him and what he truly wanted.

Having children gives us so many opportunities to make fun new memories. Maybe you’re like me and you had a magical mom who made every holiday a dreamy experience. Or maybe you had a crummy childhood, and because of that, you are working overtime to make sure your child has the absolute best.

Whether you had it all or you’re making up for lost experiences, take the time before planning a party to really think about who the actual event is for. You may find yourself like me. Our family photo albums won’t look like a Pinterest board, but the little boy in the pictures celebrating will be smiling ear to ear.

Birthday Party? No Thanks, Mom!
Birthdays are sweeter
My Son, Ferdinand the Bull
advertisement

Birthday Party? No Thanks, Mom!
Birthdays are sweeter
My Son, Ferdinand the Bull