How I Shed Those Unwanted Holiday Pounds, Bills and Family Members

Published by Leslie Blanchard1 on January 4, 2017 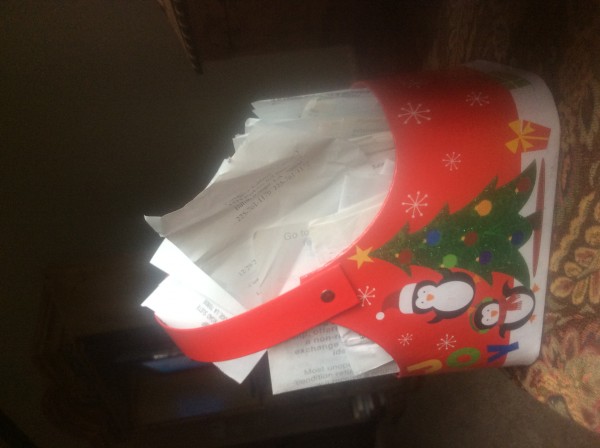 The first week of January may very well be my least favorite week of the year. To borrow an accounting term, I'm operating in the red in every department.
For starters, I'm fresh out of calories. We kick off our Seasonal Eating Marathon at Thanksgiving and don't take a break until the very last black eyed pea is sopped up by the last chunk of cornbread. I refer to this dietary style as, "food layering." I pile my next meal or snack right on top of the preceding one with no break in between.
There are a few bills rolling in as well. I admit that, like most people, I get caught up in the frenzy of creating the "Perfect Christmas" and that effort costs a bundle. I spent way too much money at Trader Joe's and Anthropologie, which made me feel like I had to buy presents for everyone else on my list too.
But what I really need to shed this week is people. I'm sick of everyone. On January 1, when I started my diet and my budget, I wanted everyone to clear out.
I'm ready to be alone. That's right - I said it - I want everyone to go back to wherever it is they came from so I can suffer/sacrifice in solitude.
Pondering this Holiday Hangover promoted me to examine different strategies I could employ to shed those superfluous family members.
I started by showing my husband the receipt basket. This is a tiny Christmas themed basket I keep in my closet that contains all the receipts we've incurred since Thanksgiving. It represents every last quart of eggnog, gift card and pullover for our super-sized family.
That did it for my hubby. It was just too easy. He took one look at that stack of receipts and I was looking at tail lights as he took off for work.
One down, three to go...
I just discovered this year (a little late in the game) that most universities offer something called "Intercession." This is a tiny little semester compressed in between the two main semesters that we all know about. It's like "Yuletide Summer School!" For approximately $1000 your local university will take your college student off your hands from January 3rd until right before the Spring semester starts.
On the one hand, I hadn't really budgeted for a sandwich semester, but on the other hand, I reasoned it's probably less than I would spend entertaining my daughter for the next two weeks. Plus, she'll get another credit under her belt. I might actually be saving money.
My daughter packed up and left yesterday. I was looking forward to her helping me take down the Christmas tree, but we'll both be glad she took Intercession the next time we sit down and map out that rocky path to Graduation. 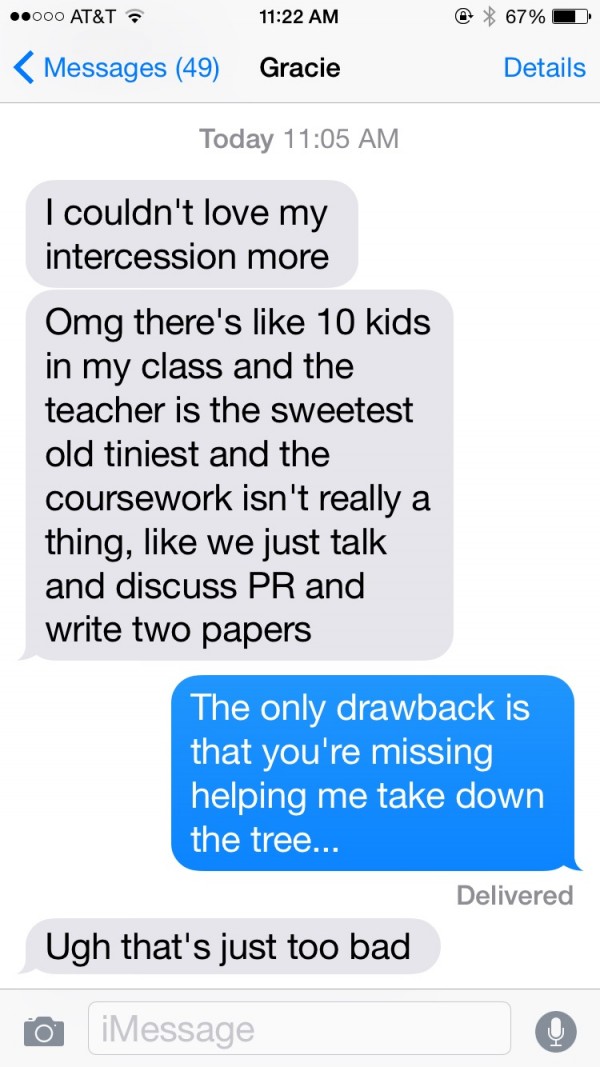 I immediately felt thinner and richer when she pulled out of the driveway.
Getting rid of my boys is proving a little trickier. They really don't have anywhere else to go. The dormitories and high schools are locked up tighter than the Little Drummer Boy's drum.
We encouraged our oldest son to pick up some shifts at the restaurant where he worked last summer. He complied. We are pretty stoked that he was able to procure a single lunch shift one week from tomorrow! That should kill about 3 or 4 hours until they let them back on campus in a few weeks. And, as an added bonus, I think they'll feed him for free after the shift.
That just leaves ur youngest. I'm not worried about him though. He's a typical teenager. All I really have to do is start pulling boxes out of the attic and taking down decorations and he'll make himself plenty scarce.
I don't know which is worse, that I've lost that lovin' feelin', or that I'm so shamelessly candid about it.
Just remember one thing - I can't miss you until you're gone!

Why December Week Nights Need to Be Simple
How are you feeling about the upcoming holiday season?
This dad (badly) hangs his own Christmas lights, thank you very much
advertisement

Why December Week Nights Need to Be Simple
How are you feeling about the upcoming holiday season?
This dad (badly) hangs his own Christmas lights, thank you very much