My daughters have never met, but that doesn't mean they don't know each other

She found the photo on my nightstand. I flinched when she grabbed it, imagining the inevitable destruction that toddlers leave in their wake. Instead, I found myself surprised at the gentle and knowing way she cradled it in her hands. A very atypical move for our rough-and-tumble girl. 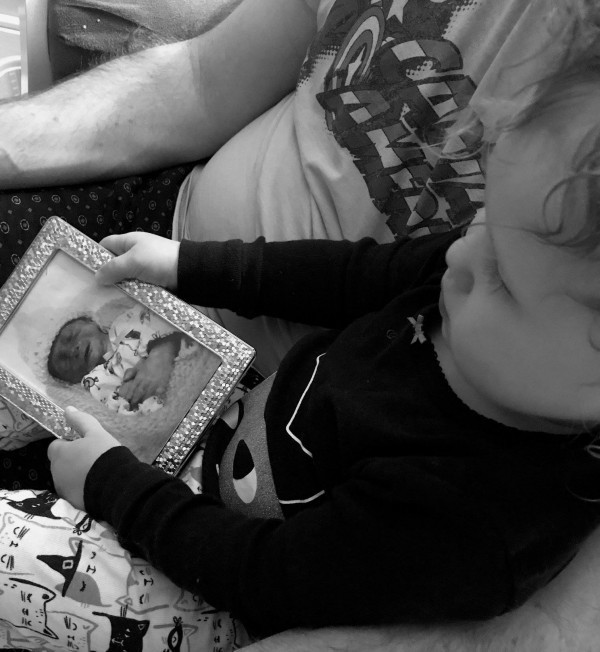 "Yes," I said, "That's your sister, Dorothy." Pulling her onto my lap, I smiled as I watched the way she intently stared upon the face of the sister she's never met.

She said it without hesitation. Frances grinned at her sister's face. Her eyes glowed with a sense of recognition for the sister she's never met.

Words failed me. All I could do was look at them - both of them. It was the first time I had witnessed a connection between my daughters, but watching Frances it seemed like they were old friends.

From the doorway, Mike signaled to Frances that it was bedtime. Giggling, and still clutching her sister's picture, Frances headed into her bedroom.

I followed, still trying to catch my breath. Turning into Frances's room, I saw her trying to get into the rocking chair with the frame in her hand. Not wanting her to get hurt, I gently took the frame and eased her into Mike's lap for bedtime stories.

"Dor-tee," she said, her hands outreached.

I passed the frame back to her and there they sat. Frances and Dorothy in their daddy's lap. Mike and I exchanged looks of wonder at what was happening, but Frances seemed oblivious to our amazement. For Frances, it seemed so natural.

And why shouldn't it? After all, they are sisters. It's true they've never met here on Earth, but that doesn't mean they don't know each other. I am often so focused on raising two children who will never meet that I forget that I'm still raising sisters.

I always assume I know everything about my daughters because I'm their mother. Perhaps this other worldly bond is one of those secrets that sisters keep between them. Maybe it's the kind of loving secret that connects them no matter the distance.

God Has A Way of Letting You Know When You're Meant to Be...
To My Mama, Who Taught Me the Most Important Thing
When The Ultrasound Goes Silent
advertisement

God Has A Way of Letting You Know When You're Meant to Be...
To My Mama, Who Taught Me the Most Important Thing
When The Ultrasound Goes Silent