Is motherhood making you FAT?

Published by jthreeNMe on February 6, 2019 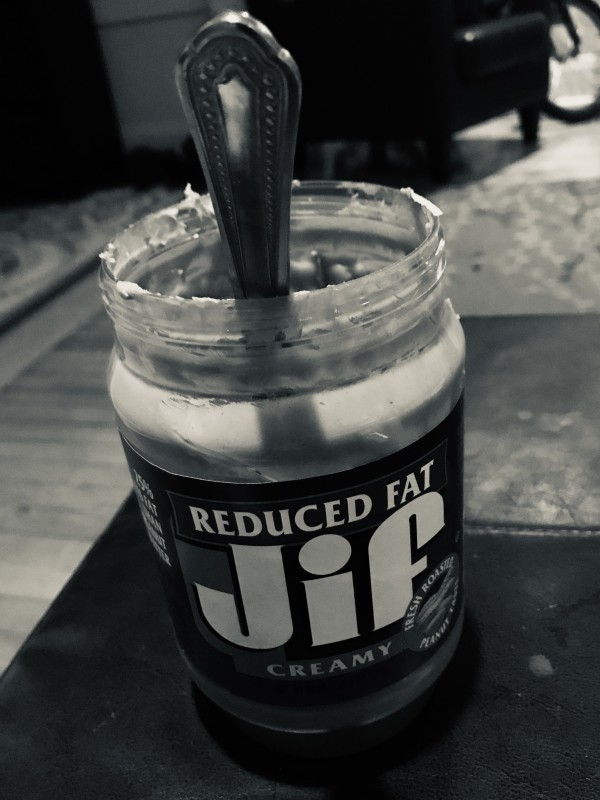 Tonight I ate directly from the peanut butter jar.

If there is ever a ten or twenty wings option, I'll go twenty -- all day, every day.

Are we talking ribeyes, now? Give me one that's bone-in and make sure that bad boy is at least 20 oz (and fatty).

And, embarrassingly, that store-bought iced coffee, make it daily, a Venti and add some extra cream.

This is what motherhood has done to me.

Sure there are days when I order the chicken; grilled and skinless, of course, and oh yeah, no butter or oil on those side veggies either.

Sometimes I order the salad; no croutons and fat-free dressing.

And, occasionally, I get by just fine on a diet of k-cup coffee, water, protein bars, avocado and, on occasion, a Subway sandwich.

However, on the days I opt for gluttony, it's usually served up with a large side of guilt, which I reluctantly digest, and then wash down with a plate of disappointment in myself and some negative self-talk for good measure.

Now, did motherhood really do this to me or has this habit of rewarding and pacifying myself with food always been a habit of mine?

And, if I have always been like this, has this irregular and unhealthy eating pattern been maintained and exacerbated with each child I've birthed and the challenge that has been raising them?

Looking back, I feel as though I've always stress-ate. But then again, I still ate, even when I wasn't stressed.

I grew up in an Italian family, and I was an athlete which tells you that I was always hungry and there was never a lack of food.

While I was at my healthiest weight in high school, I quickly packed on the pounds when I stopped playing soccer and began living in a studio apartment above a pizza joint.

Cue lots of late night, drunken munchie cravings and in four years, I packed on approximately 55 lbs. Over the next few years, including two pregnancies, I packed on another 20 pounds or so for a total of being about 75lbs overweight.

I hate that word.

I repeat I hate that word.

According to my BMI at that time, I was obese.

My goodness, that's hard to share, but it's super important that I do.

You see, when I was at my skinniest, I was happy, but focused on the wrong things.

I cared more about how I looked and what people thought of me than the values I was living and what I could be doing to make a difference in the lives of those around me.

And, when I was at my heaviest, I was only sort of happy, and that's kind of what contributed to the weight gain in that I was in a serious relationship and very comfortable with my significant other. But, as the weight piled on, so did my self-consciousness and I became this embarrassed shell of the outgoing, gregarious person I once was.

After the birth of my second child, I made a decision.

Upon being weighed at my 6-week post-delivery appointment, I was shocked to have only lost a few insignificant pounds since giving birth. And, at that moment, I decided that it was time for a life change.

So I used a calorie counting app, and without adding in any exercise, I tracked my calories.

Can you guess what happened next?

I got pregnant again.

Go figure that my husband, well, he liked my new bod.

And, so did I; except something was different this time.

Though I had returned a healthy weight, I made a conscious choice to not slip right back into the unhealthy state of mind I used to have on life where I valued appearance and judgment more than realness and compassion both towards myself and in others.

And, I'm happy to say that I've been able to keep that perspective.

At present, I'm about 10 pounds from my ideal weight, but honestly, I don't stress over it too much.

I'm getting to the gym when I can and when I want and trying my darndest not to beat myself up too badly when I don't make it there.

I also still eat a fourth meal treat every night once the kids are in bed. Some may say that is a bit sad and gross that I reward myself with food for getting through my parenting days with everyone (myself included) still alive, but, oh well, I still do.

So tonight, I ordered and killed a whole plate of smothered nachos.

In the very near future, I will likely devour a 22oz ribeye by my damn self.

I will also make time for the gym, at least two or three times a week, and will be sure to indulge in some routine self-care.

There are no absolutes when it comes to keeping a balanced diet and mindset.

By definition, balance is "a condition in which different elements are equal or in the correct proportions." So, while it's great to be uber strict with yourself when you are trying to make a positive life change, that shiitake is not going to be sustainable if you never smother those mushrooms in some melted butter. Meaning, don't deprive yourself of occasionally indulging in life's little joys for the sake of some ridiculous and incorrect notion that how you look is all that matters.

It's how you feel that should guide your choices and I'll tell you an hour in the gym makes me feel darn good, but so do cheese fries -- so, I'll take both.

I spell balance, R-E-S-P-E-C-T because I choose to respect myself, regardless of whether my appearance and weight are what anyone else thinks it should be.

All of my choices --

-- are all helping me stay sane in a world and phase of my life where things can very easily get overwhelming and physically and emotionally taxing.

They say "don't hate the player, hate the game," but I say respect the player who has figured out that this game of life is a lot more enjoyable when you value yourself, respect your choices and favor authenticity and grace over appearance and the number on a scale.

I'm Rolly and Lumpy and That's OK
Want the secret to loving your body? Stay in your own lane
To The Mom Who Hasn’t Lost the Baby Weight But Wishes She Could
advertisement

I'm Rolly and Lumpy and That's OK
Want the secret to loving your body? Stay in your own lane
To The Mom Who Hasn’t Lost the Baby Weight But Wishes She Could