'Ma'am, there's a baby under your seat': Tips for traveling with littles

Published by christie cuthbert on April 3, 2019 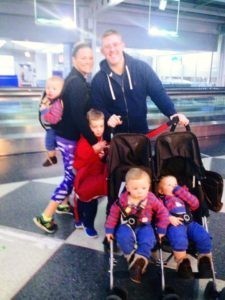 So there we were: February 16, 2015, on a midair flight from Chicago to San Francisco. We were headed on a fun couples weekend with friends, wine tasting in Carmel Valley, but would also use the opportunity to spend some time with my family. My oldest was almost 5, and my triplets were 17 months old. How bad could it be, right? We had iPads, snacks, coloring books, mini trains, Hot Wheels, and an entire backpack of tricks.

It's only four-and-a-half hours in the air. We can do this, I thought as we went through security, breaking down a double stroller and stripping off Bjorns while simultaneously shoving our million bags through the x-ray. Just getting all six of us onto the aircraft was comparable to sprinting through a hail storm, and what went down for the next 270 minutes was pure pandemonium, with parts so horrendous I can't even repeat or I may start twitching from the post traumatic stress of it all.

As I dive into the chaotic stories of Southwest Flight 2338, I've included some dos and don'ts I've learned along the way while flying the friendly skies with four small kids. Hopefully these tidbits make the lives of moms with future trips a bit less like an episode of Game of Thrones, volume turned all the way up, inside a Boeing 740.

DO bring $5 Starbucks cards. People always suggest buying everyone in the row a drink when your kid screams or kicks the seat. But in reality, most people traveling with little kids are flying in the morning or daytime hours, so a gift card for some coffee and a smile may go a bit further than offering to buy airline booze at 7:00 A.M.

DON'T let your 17-month-old crawl down by your feet to give yourself a break. Yes, he or she needs to move around, but as you're looking for something in your bag you may hear the person behind you say, "Ma'am, there's a baby under your seat." One of my triplets, within 30 seconds, managed to wedge his plump little Michelin Man body under my airline seat and had to be pulled to rescue by a 50-something accountant seated in the row behind. As I popped up to grab him with a Dum Dum stuck in my hair, I profusely apologized and was met with a sincere look of pity. Where was my husband when this ordeal was going down, you may ask? Well, bless his heart, he was standing in the back of the plane for the entire four hours, rocking and bouncing any number of babies who were screaming. I'm pretty sure he eyed the rear emergency exit a few times thinking he'd never survive the entire flight. I'll never forget the amount of human goo on his clothing by the time we walked off the plane in San Francisco. And I doubt he could feel his arms by the end of it, because some child of ours was continuously whining or screaming for every second of the entire flight. As we walked into the terminal, my parents were there to greet us at the gate. We stood there shell shocked and said, "We hope you really enjoy this visit, because it will be the last one for a very long time."

DO buy a water bottle at the airport before boarding. This particularly applies to those with boys. Airplane toilets are insanely loud and scary, and I've endured many flights on which one of my boys refused to use the facilities but was no longer in a pull-up. Desperate times call for desperate measures, people. You can use common sense to understand why the Aquafina bottle is a necessary tool.

DON'T overfeed big snacks and drinks. It may come back to bite you. Chose small, flavorful things that may take longer to eat, like nuts, raisins, lollipops, and even orange Tic Tacs. After one stressful trip trying to keep my oldest from crying as a toddler, I gave him one too many hush bottles and handfuls of puffs, and once we got into my parents' car, everything came back up and then some. Vomit in a car seat has got to be one of the worst motherhood clean-up jobs there is. Along with the Pampers, they should send new moms home with hazmat suits when they leave the hospital.

DO bring Post-it® notes and stickers. For whatever reason, this keeps littles very entertained. The Post-its can be stuck to the seat pocket in front of them, and you can create art, games, and anything else you can think up. At one point on the dramatic Southwest flight, I had about 45 Blaze and the Monster Machines stickers in my hair. I looked like I'd escaped a mental institution, but if it was going to provide 60 seconds of entertainment, I was game. I also just realized there is an HEB Buddy Bucks sticker stuck to my butt right now as I write this, so the moral of the story is, stickers never get old.

DON'T forget that your kids are kids, and it's likely that most people sitting around you are parents or grandparents themselves and understand how stressful it is to travel with kids. I've had people offer to hold a baby, and some watch a few while I hustled one back to the bathroom. Don't get me wrong: there are always Judgy McJudgertons lurking on every plane, waiting to throw a side-eye or loud sigh. But forget about them. My husband always says the kids pick up on their mom's stress level, so anything you can do to calm yourself, do it.

DO plan yourself a "vacation" after the vacation. Whether it's a massage, date night with your spouse, or simply alone time at Target, traveling with kids is fun but exhausting, and you'll need to decompress upon return.

DO know that it gets better. I just started traveling solo with my boys this past spring, and at 4 and 8 years old, it's great. They carry their own belongings in their backpacks, sit quietly, and even help with luggage. We've managed shuttles to rental car centers, hotel hopping, and public transportation, and I've only lost a kid a handful of times. Joking! Kind of...