My son talked and I failed

As a mom of an autistic child I feel like I am the expert on my son, especially because he lacks the ability to have a voice of his own right now, but am I? I might know him better than many others but am I the final authority on what he is, thinks or does? I don’t think so anymore. Just like no one knows me better than I do, I cannot take away that credit from my son of being an expert on himself.

I have claimed on several occasions that my son may have speech challenges but we communicate like any other mother and child. Words don’t matter. I would like to believe that , for most part, this is still true but sometimes some incidents make me doubt my skills . I thought I can read him even before he communicates. That this is a self indulgent assumption is what I was rudely reminded during a walk in the park.

It was our annual family ritual of visiting this beautiful park in spring. It looks pretty and I make it a point to go there and click some lovely family pictures. We take leisurely strolls and just soak in the beauty. My son seems to care least about the “beauty” part of it but so far he has seemed to enjoy the opportunity to be outdoors. This time around though he kept pulling me towards any bench we walked past and persistently said “mumma sit”. I insisted we continue to walk around instead, complaining about how lazy he was turning out to be. I still believe he is more of a couch person than a running-around-a-playground kind since he mostly avoids playgrounds and sports in general and is not a fan of walks. He persisted, I resisted and like any other mom, I finally gave in. 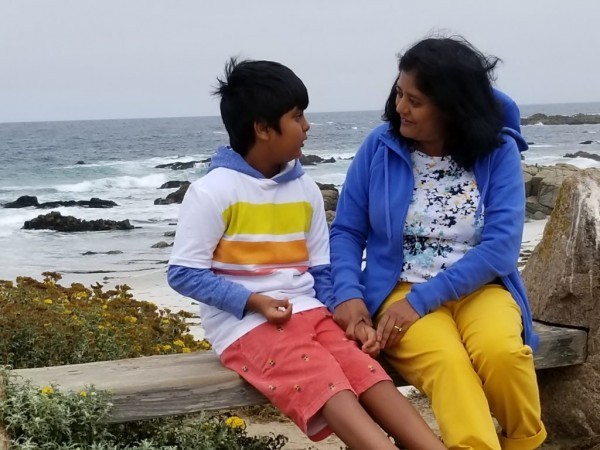 We rested on a bench and that’s when he started taking off his shoes and socks. Taking off his shoes and socks is not uncommon for him. It’s a sensory thing. He takes it off and I put them back on when we are outside of home. So even before he could take his socks off, I had his shoes back again. We pulled him up after a brief break, and dragged him around a little more before getting back in the car. Once home I helped him take off his shoes and that’s when I saw those shoe bites !!! My poor boy!!! All this while , when he was asking to sit and take his shoes off, I thought he was just being a lazy bum , when actually he was hurting. I was so busy looking at the flowers that I didn’t notice his discomfort. I didn’t hear the words that were buried within the few words he could say. I felt like a failure. The one person he relied on being his voice failed to hear him. I apologized to him and I hope he forgave me. I think he did because he hugged me right back when I kissed him.

It’s a small incident but I wonder how many times he might have tried to talk to me with his limited vocabulary and I missed the point. How many helpless moments he might have had when he tried communicating and nobody understood !

I have had several therapists indicate that my son might never talk and every time I hear that my heart sinks, I get really mad and at the same time my resolve to prove all of them wrong becomes stronger. The first step to that is for me to be able to communicate with him and give him the confidence that the world will understand whatever way he chooses to talk to it. But this time , I failed. He talked to me and I failed him ! However, it only gives me the reason to try harder and know him better.

I know , my little guy has a lot to say and there is so much inside him that wants to come out. I need to be by his side when he does that, to hear him, to understand him, to support him, to give him the confidence that he can. He might not be super proud of his mom right now but I am beaming with pride over how well he tried to put his point through and did not give up trying to ask for what he wanted. He makes me proud every day in the little things he does and I hope to make him proud one day as well. I failed this time, but I’m learning to get better.

I'm mom to an adorable little boy Vedant. He was diagnosed with Autism when he was 3. After the initial denial and grief following the diagnosis we have now learnt to live with our new situation and enjoy our little boy in every way we can. We celebrate his uniqueness and we try to learn lessons every step of the way. I'm also a blogger and I love to share my family's stories and experiences - from meltdowns to memories, from therapies to thrills. I share all of it.

I'm allowed to say "No"
I Experienced a Parenting Fail
How A Push Turned Into A Drag: 6 Tips From Rachael Putney To Help Prevent You And Your Child On The...
advertisement

I'm allowed to say "No"
I Experienced a Parenting Fail
How A Push Turned Into A Drag: 6 Tips From Rachael Putney To Help Prevent You And Your Child On The...