Pregnant at 16, Now Hailed as Mom of the Year

Published by Gail Cornwall on September 15, 2016

True to her name, 14-year-old Diamond Coley shined, trailing light and laughter through the classroom. I should know; I taught her 9th grade English. Nearly a decade after we lost touch, a photo of Diamond showed up in my Facebook feed. Her face reflected a spirit hardened by the pressure of raising the seven-year-old by her side.

I did the math, realized Diamond had given birth at 16, and reached out. After finding out I’d become a writer she said, “I just want people to know what our life is like. I don’t want to be alone with it anymore.” Nearly a year later, she made news by sharing the raw, heart-twisting details of her life as a single teen mother in the Washington Post. 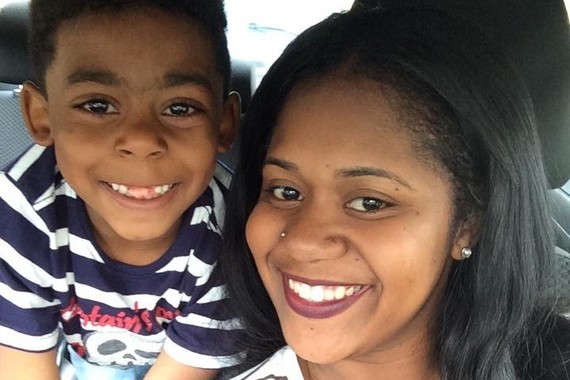 Diamond revealed how she “faked her periods for a while” when hiding the pregnancy as a high school junior, how an appointment for an abortion ended with her sobbing in the arms of her boyfriend’s mother in a clinic parking lot, and how now starting work at dawn as a public transit janitor means she has to beg others to drop her second-grader off at school.

She also carries within her a deep, soul-chafing fear for her son’s safety, partly since her home is “right up the street” from Washington D.C.’s headline-making violence, and also because she is raising a black boy to become a teenager and then a man in a society that almost always assumes the worst of black males.

Diamond’s tale struck a chord. One reader, a former teen mom herself, says she cried in the shower for almost an hour, the story releasing something inside her, validating her own struggle.

The article landed on Yahoo’s homepage. Thousands read at one time, and strangers from places like Denver and Kentucky emailed and tweeted seeking to help Diamond achieve her dream of enrolling in college. Cara Neal, the owner of Conley K. Boutique in Little Rock, Arkansas, mailed her some new clothes.

Readers also sent suggestions, highlighting Wilson College’s Single Parent Scholar Program and the Mothers Living & Learning track at the College of Saint Mary. Says the latter, “Bring your child and your goals and we’ll help make it all work.”

Of course, both of these programs would require paperwork and number crunching to figure out when Diamond can safely relinquish her steady job. Jennifer Kain, a San Francisco single mom with a background in finance, volunteered to help manage all that.

A GoFundMe page followed, specifying that all money raised would be placed in an educational savings account. “Malia Obama is taking a gap year,” the campaign reads, “Let’s come together to make Diamond Coley’s years of hard work a ‘gap decade.’” And donations began to trickle in.

The buzz could be all thanks to the unique determination evidenced in the article—how Diamond refused to drop out of high school, graduating with honors despite the baby on her hip, and now does what she must to make ends meet, even once scraping a bowel movement off an escalator.

But people across the country said the opposite. It’s not her specialness that jumped out at them, but that they see themselves in her words. They relate to the worries she shared: about being a helicopter mom, too overprotective, or a tiger mom, too aggressively involved in her son’s football team. They too wrestle with how to limit screen usage and protect unstructured time in our busy, tech-crazed world.

“I don’t have my hair done,” Diamond told the Washington Post, “But I had to make sure he got a haircut and new shoes. There wasn’t enough left for me. There never is.” Neal says that’s why she sent the 25-year-old a care package, because “she is so selfless, just like most moms tend to be.”

“Sometimes it all overwhelms me, and I sit and cry,” Diamond revealed, but America isn’t having it. Because by helping her we tell all moms, no, you should not have to do this alone. We confirm that though we may have vast differences in opportunity and circumstance, our common concerns unite us.

Though she’s not there yet, it looks like Diamond’s dashed collegiate hopes, through the kindness of strangers and the best of the internet, may yet become simply a dream deferred.

Gail Cornwall is a former public school teacher and recovering lawyer who now works as a stay-at-home mother and freelance writer in San Francisco. Her work has been published online by the Atlantic, the Washington Post, Salon, the Huffington Post, and Scary Mommy, among others. You can find Gail on Facebook and Twitter, or read more at gailcornwall.com.

Gail Cornwall is a former public school teacher and lawyer who now works as a stay-at-home mother and freelance writer in San Francisco.

'This year will be different': School year resolutions I'm making as a mom
Play Dating Isn't for the Faint of Heart
Just Keep Going
advertisement

'This year will be different': School year resolutions I'm making as a mom
Play Dating Isn't for the Faint of Heart
Just Keep Going