Should I let my 16-year-old son have a moped?

This has less to do with my son than it has to do with me. I'm fortunately in the position of being legally responsible for my son and therefore have the choice of saying yes or no when it comes to these kind of decisions. Realizing the well know risks of injury/death that naturally go with a person each time they ride one of those forms of transportation if I grant his wish, I'm not sure if willing to live with my decision if the worst should occur? While technically uninformed statistically as to the increased risks that are involved compared to driving a car, I'm sure those statistics bear out much worse results from an accident. 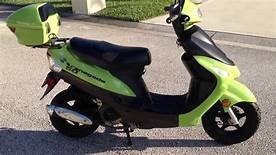 In the end, should I cave to my son's request and the worst happens, should I prepared to suffer the guilt I will endure for the rest of my life? My decision as a responsible parent comes down to making the best overall long term decision for my son's safety while he is still under my care. My decision for myself comes down to question if I really willing to look myself in the eye in the mirror everyday for the rest of my life should I lose my son as a result.

I know what I decided and that was no. I remember the incident with one of my friend When her son moved out at 18 he bought a moped 2 months later. Three months after that, she got a call from the police that he was in the ER with multiple fractures he suffered in a bike accident. He lived fortunately but to this day you can see the outlines of the screws that were used to rejoin his broken bones in his chest through his skin.

My son is 16. I don't want him riding until he is 17 or 18... get him a moped that doesn't work but has most of its parts. He can learn a valuable skills that he will use his whole life. He will learn to problem solve, research, try after failing, work on small engines, learn basic tools, be creative. The best part is it will likely take him a year or more to fix it if he has no previous skills. As a bonus you know what he is getting for gifts for the next year... moped parts/books/tools.

But really, worrying about the safety of kid on a motorbike is the wrong way to go about it. First realize its normal to be protective but then realize my energy is better spent educating my son on how to ride safely. Require he should pass a motorbike safety course before he buy a moped, this is a dedicated class above and beyond what is required by law. If after all that my son is still riding dangerously.... not having a motorbike is not going to protect him. He will just hurt himself in some other way.

founder and content creator at trendy business idea. I live with my 10-year-old little girl. If you are seeking ideas and inspiration for new business ideas, you can check my blog.

Can a 16-year-old child drive a Moped ?
I Love You Enough To Be Hated By You
Uncertainty: supporting your children when you don’t know what the future holds
advertisement

Can a 16-year-old child drive a Moped ?
I Love You Enough To Be Hated By You
Uncertainty: supporting your children when you don’t know what the future holds