The gift I found while I cared for my child

On March 7, 2016, my daily commute changed for the first time in six years. Instead of driving each morning to my law firm’s office, I drove to Children’s National Medical Center – the only home my son Ari ever knew. For 186 days, I made that same journey. And then, on September 10, 2016, it abruptly ended.

In those 186 days, my husband Jeff and I faced the greatest challenges of our lives. But as we fought alongside our son to beat the odds, we were never alone. We gained an extended family of doctors, nurses, and staff in the Cardiac Intensive Care Unit (CICU) who guided us and fought with us every step of the way.

When we found out I was pregnant, we hoped for a smooth 9 months, as we had with our older son Zachary. We soon realized, however, that our journey would not be easy. On January 12, 2016, we learned that our unborn son had a condition called complete heart block. His heart rate was 1/3 of what it should have been (50 bpm instead of 150 bpm). At only 27 weeks pregnant, I was immediately admitted to the hospital and told that I might need to give birth that day. Jeff and I were both shocked and scared when we learned that our son had only a 1-2% chance of survival.

It was on that day in January that we chose the name Ari, which means “Lion of God.” We knew right then and there that our son would need to be courageous to battle his heart disease. And, oh how he fought. Ari made it to 35 weeks in utero and was born on March 7, 2016. He had his first of six surgeries at 10 days old. He had more tests than we could count and a team of at least 12 specialists poking, prodding, and caring for him regularly. 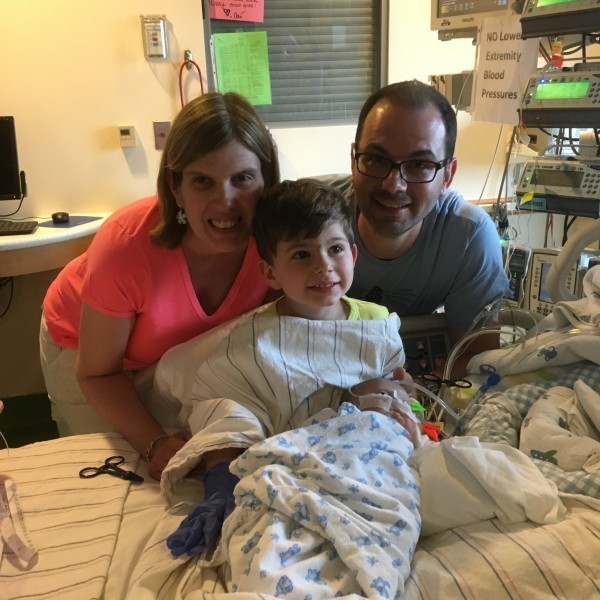 While I remember everything that happened during those 186 days, there are certain memories that are more intense. Ari’s medical team went above and beyond many times not just to care for Ari, but to care for me, Jeff, and Zachary, and to allow us to celebrate certain milestones as a family.

One such moment came on the day of Ari’s first surgery. While we knew Ari would eventually need surgery to receive his pacemaker, we had not been expecting it to come so soon. But Ari’s heart rate was showing signs of inconsistency and his medical team felt that the surgery was now necessary. Jeff was at work that day and had to rush to try to make it to the hospital before they took Ari to the Operating Room. Ari’s nurse did everything she could to make sure Jeff had a chance to see Ari. If it weren’t for her, he probably would not have made it in time. But her efforts allowed him to give Ari a kiss before we walked him down the hallway for what would be the first of six times.

Ari’s doctors and nurses made sure that Jeff and I were able to hold Ari in our arms as often as possible. While holding a newborn child may be an everyday occurrence for most new parents, it wasn’t an everyday occurrence for us with Ari. Transferring a critically ill child into a parent’s arms is no small task. It requires multiple nurses and other staff members to rearrange the room, make sure there is enough slack in the wires and tubes, and ensure the complete safety of the child. The days I was able to hold Ari were some of the best, and I will never forget the way he looked into my eyes when I held him in my arms.

Because of those same doctors and nurses, Zachary was also able to hold his little brother on his lap. Watching Zachary rub Ari’s head, hold his little finger, and give him a kiss on the forehead – just as any other big brother would do – is a moment I will never forget. That is the day we also got our one and only family photo with Zachary holding Ari and Jeff and I smiling proudly behind them. 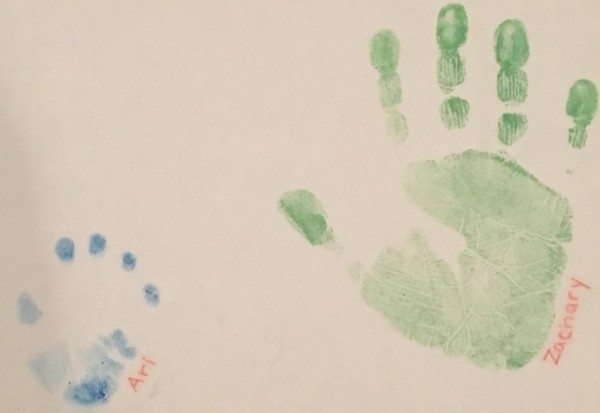 I cherish these and many other memories – all made possible by the CICU doctors and nurses who gave us 6 precious months when we weren’t sure we’d have even one day.

I remember the day Ari passed away like it was yesterday. We knew that Ari’s time had come and that we had to let Zachary say goodbye. But how do you tell a 4-year-old that his baby brother is dying? The CICU child life specialist guided us and wrote the most beautiful script. As Zachary sat next to Ari on the bed, Jeff and I sat next to our sons with tears streaming down our cheeks. I don’t know how I got through it that day, but I read that script and broke the devastating news to Zachary.

Ari’s nurse helped make that difficult day more special. Because of her, we have a lock of Ari’s hair, clay models of his handprint and footprint, and his handprint next to Zachary’s. In those moments, I would have never thought to capture those tangible memories. I will be forever thankful that she did.

I remember holding Ari for the very last time. The machines and monitors were off; Ari was free of his wires and tubes. It was just me and Jeff holding our precious baby boy. As I looked up at the doctor and nurse, I saw tears in their eyes. Not only had they become our family, but we had become theirs.

When Ari was born, I didn’t know what the future would hold. But I never imagined that our family would grow to include dozens of doctors, nurses, and staff from the CICU at Children’s National. They are the people we came to count on and trust as we faced the most difficult moments of our lives. They were often the first people we spoke to in the morning and the last people we spoke to at night. They were the constant in our lives for the 186 days Ari lived in the CICU. They were true gifts in our most difficult moments and remain an important and regular part of our lives even today. While Ari is no longer with us, the memories we created remain vivid and the relationships we forged carry on. 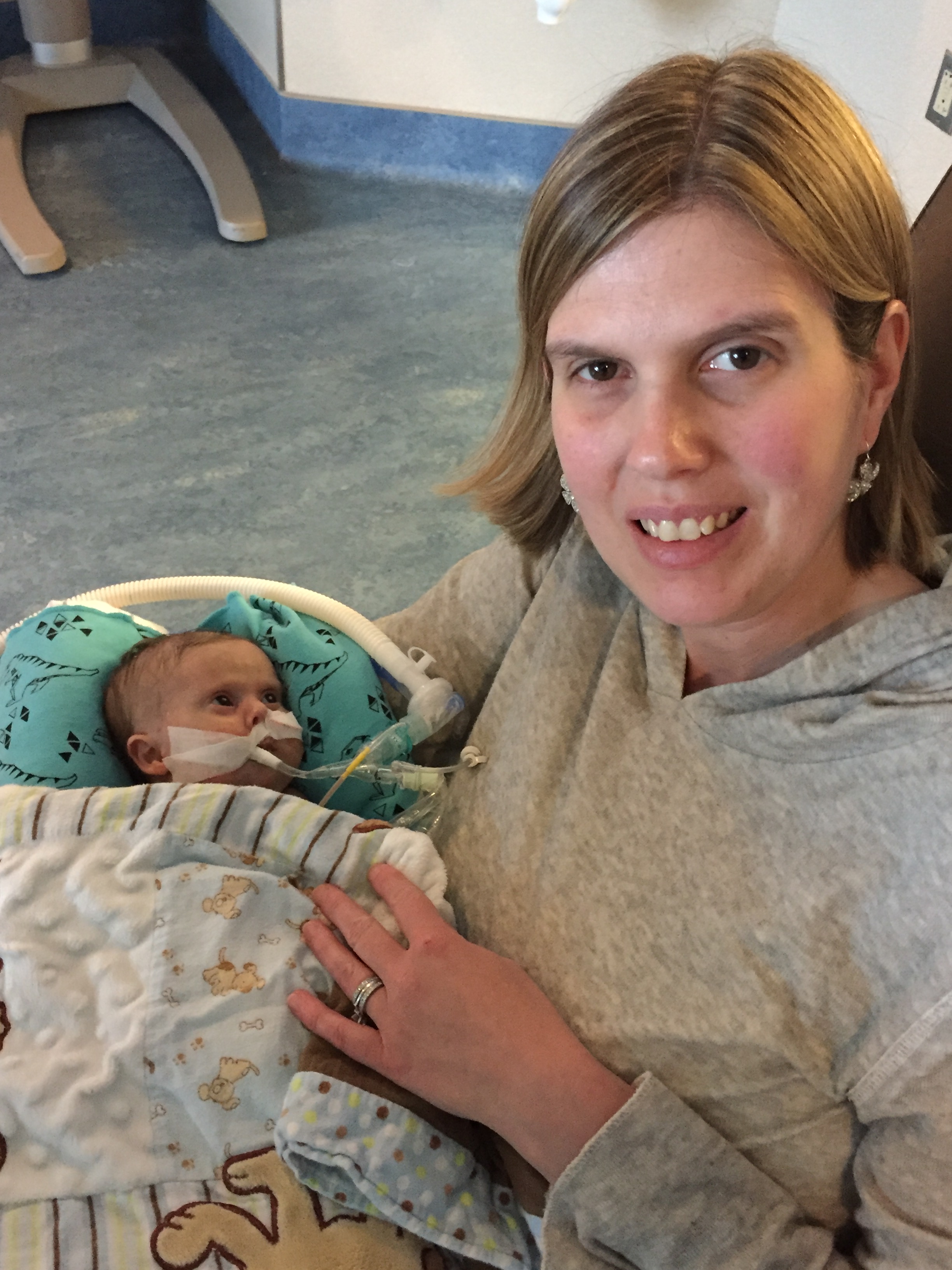 Heather Goldman and her husband Jeff are co-chairing the 2019 Race for Every Child, a 5K run/walk benefiting Children’s National. After their son Ari passed away, Heather and Jeff vowed to honor his memory by giving back to Children’s National. They created Team LionHeart and will be participating in their fourth Race this year. Heather is an attorney with Bryan Cave Leighton Paisner in Washington, D.C.

25 Years Ago, We Asked to Put Our 25 Week Twins on Our Chest; We Were Told No
The Strength of a Village
What I learned from my son's death
advertisement

25 Years Ago, We Asked to Put Our 25 Week Twins on Our Chest; We Were Told No
The Strength of a Village
What I learned from my son's death