So much of me has changed since I had my children. I am such a different person when I interact with my little ones. Maybe even a new person to my husband at times - showing a softer side and sometimes even a sterner side. As a parent it's not always easy to accept all the change that comes with children. It can be a challenge to really let things go at times... like the cleanliness of our homes, our reactions to tantrums, the continually decreasing space around us and the lack for privacy...

Lack of privacy doesn't actually bother me as much as I thought it would, but I find it comical how little ones have no sense of privacy for others or themselves. I have two who commonly run naked throughout the house, and not just for potty training purposes. At 2 1/2 I'm only now teaching them about privacy, but they seem to be grasping the concept pretty quickly. When they are not in their own environment, they're fairly shy about things (luckily) so I'm not too worried about raising a couple of public streakers. However, when they're home, we've begun lessons on privacy and respecting others. For the most part, it doesn't bother me that they want to go to the bathroom when I do or that they want to bathe or shower with me. 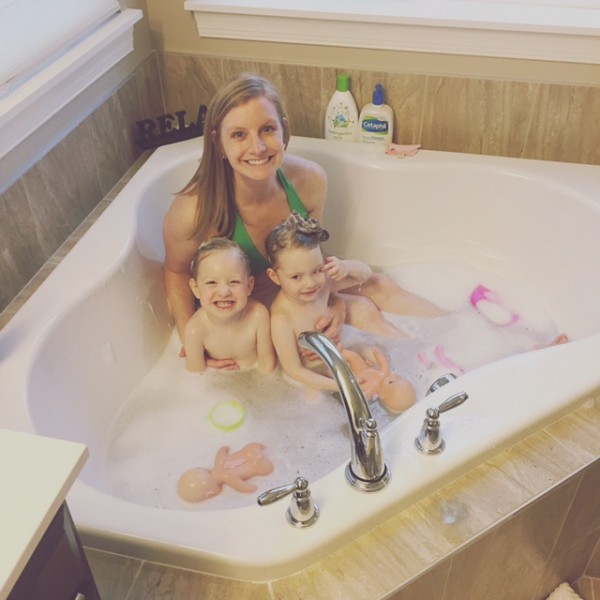 I am indeed addressing the need for boundaries though - especially when they put their hands down my shirt because they just want to know what in the world is inside...?? I'm somewhat oblivious getting dressed in front of them - until recently when I got pinched in the butt (with giggles to follow) and I realized that I needed to have a discussion about some basic privacy (as I laughed a bit inside). They are also quickly learning how to respect one another. The word "privacy" started in the bathroom or with diaper changes and they will both (on occassion) request privacy when they are going to the bathroom.

"I need some pivacy pwease!"

So, the idea of privacy has been in their head for a while, but implementing it is a fairly new concept for two toddlers who have always been by each other's sides and in each other's faces since birth.

However, I do miss regularly going to the bathroom alone during the day or at least with the door fully shut, but I know I will get my privacy back someday!

In 2013 I became a mom to my twin girls. It's been exhausting, challenging, and the most amazing experience. I fell in love with motherhood quickly and began blogging. Being a mom is still surreal at times and I wouldn't change a thing about it.

When you've got multiple kids close in age, it's impossible to not feel like you're failing
I Need the Potty Whisperer
Are Chore Charts Even Worth It?
advertisement

When you've got multiple kids close in age, it's impossible to not feel like you're failing
I Need the Potty Whisperer
Are Chore Charts Even Worth It?