I Haven't Slept Well in Years, But I Have A Good Reason 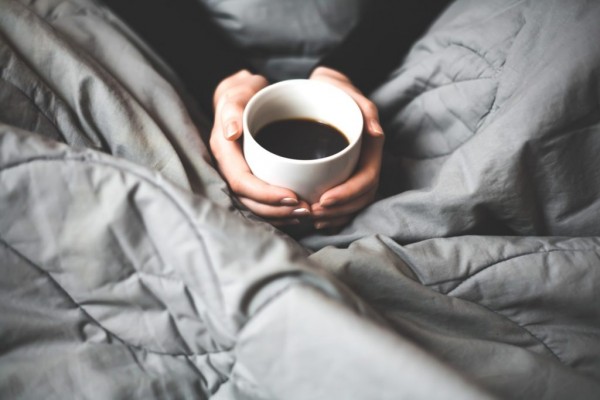 I have a motherhood confession. There is a child (or two or three) sleeping in my bed more nights than not. With four total, and all of them still relatively young enough to wake up in the middle of the night sick or scared or wet or thirsty or just alone, it's a nightly event that at least one and sometimes more pads into my room, holding a blanket or a stuffed something that has seen better days. I roll over and look at the clock and inevitably there's a moment where my stomach sinks at the math of how much more sleep I just might get if I am lucky, but still, I always make them some space.

I know it's a controversial subject, and I know (and respect) that it's not for everyone. I know the parenting magazines would probably frown on it. Perhaps more importantly, at least to me, I also know the lack of sleep has likely taken years off my life or at the very least made me look like it has. And yes, I've read the sleep training books and talked to the doctors and let myself fantasize about what it would be like to just once, sleep wholly through the night and let me tell you: the prospect is absolutely lovely.

But I feel like this is something I need to do, and there is a good reason. It's this:

When I was 16 I stopped eating.

It wasn't that simple, and it wasn't all at once like that or even a conscious decision, not at first. But I was no longer a kid and me and my life were both getting big fast and I knew I needed to do something to try to make us small again because the bigness felt too new and frankly a little bit scary.

But as these things do, pretty soon the not eating itself as a thing got too big, bigger than I could easily handle myself. I lost more weight than I ever meant to although somehow it still wasn't enough, and the anxiety problem that had been a manageable hum in the background of my life before became a loud and constant scream that I couldn't ignore. Nighttime was the worst, and then I stopped sleeping. I would toss and turn for hours, trying to convince myself I wasn't hungry and I wasn't sick and I wasn't falling quickly into a hole that was too big for me to pull myself out of alone.

My mother and I were not in the best place then--neither of us separately was healthy and together we were worse than the sum of our parts--but I knew she saw what was happening to me and I knew she was worried as well. One night when it all got to be too much, I did something out of desperation that I hadn't done since I was maybe six and scared of thunder: I crept into her room and climbed into her bed.

She didn't say anything, not that I remember, and I assumed she was asleep. But I pulled the covers up and settled my head on her pillow and closed my eyes and then I felt it, so light I thought I imagined it at first, her hand resting on my back. I'm sure it was the first time we had touched in months, maybe years.

Sometimes I think that hand saved my life. Or it was the bridge that got me into the next day which got me into recovery, eventually. At the very least, I know this: I fell instantly asleep.

For a short while it became a routine of sorts, and one that we never spoke about in the daylight. I don't know if she appreciated those small moments of togetherness we had there like I did or if she just tolerated them because she knew I was sick, and she's gone now so I can't ask. But when she died and I found myself unable to sleep again, I was grateful for the memory but also for its lesson.

You see most days I'm not a great mother, not like the ones you see on TV or read about in those same parenting magazines that say my babies should learn to self soothe. My temper is shorter than I'd like and I make more boxed mac and cheese than anyone should ever admit to. I am terrible at braiding hair or remembering to sign the thousands of papers that come home every day stuffed into four different backpacks. I’m much too distracted and I’m tired and I make so many mistakes daily that usually I lose count before lunchtime.

But at night? This is still something I can do, what my own mother did for me all of those years ago. I can make space. I can let them in, rest my hand lightly on their backs and feel their soft breath as they settle next to me and--if only just for that moment—help them rest easier in the knowledge that they don't have to be alone. I know it's not forever and their need, big now with little-kid troubles: night terrors and bed wetting and things under the bed, will evolve into bigger-kid need and likely then into the not needing at all, and it's a prospect that both gets me through my tired days and terrifies me.

But for now I know this: for as long as I can I will help them sleep, even if it means that tonight, I don't.

Liz is a writer, blogger, teller of stories, believer in truth, and mama to four. She shares her stories on lizpetrone.com and all over the internet. She can also be found on Facebook, Instagram and Twitter.

Liz is a writer, blogger, teller of stories, believer in truth, and mama to four. She shares her stories on lizpetrone.com and all over the internet.

What's the best bed time for babies?
Why I'm Still Selfish Even After All These Kids
There is a Song Inside of You Yet
advertisement

What's the best bed time for babies?
Why I'm Still Selfish Even After All These Kids
There is a Song Inside of You Yet