The secret to family time with teenagers: Friends!

I may have found the holy grail of family time! (Obviously by accident.)

Like a lot of busy families, we tried scheduling it. Applying all of these rules like: no friends, only the four of us, or having an out of the house activity. It worked, as much as scheduled fun can work.

That's until my daughter and her friends starting watching "The Bachelor" together. I never watched the series because I couldn't quite figure out how so many 'Marketing Specialists' could still be single. One episode, I popped my head in the room when I heard their collective gasp at the drama unfolding. They set me straight, after I made a rookie mistake of saying, "She seems nice." And then I was immediately sucked in to "The Bachelor" franchise vortex.

The following week, the girls asked if they could invite a few friends to join them. This quickly turned from 2-3 girls to 10-12 friends every Monday night.

One Monday I said, "Text your friends if they want to come a half hour sooner, I've got tacos."

Note: If you ever want teenagers to show up on time for something, offer food. 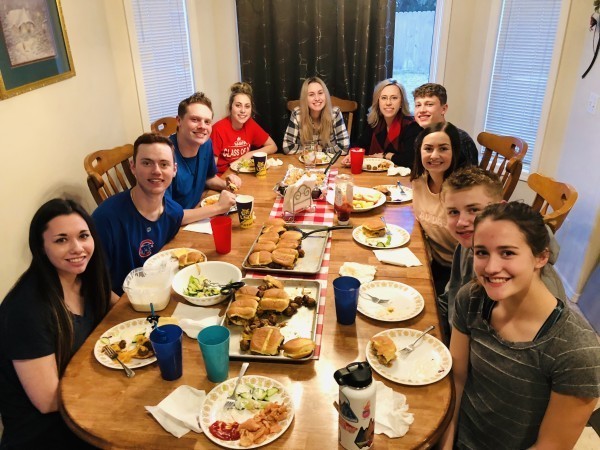 My husband and I watched as every one of them helped set the table and left their phone in the living room, without prompting! Guess what, contrary to what the internet says, parents are still raising their kids with manners! Week after week, the kids showed up with sides and desserts too.

We expanded our table as big as it will go. We sat, ate and laughed. No one was in a hurry to get to the show. (Thank you, DVR.) We caught up on all their latest stories and gossip. I noticed that even though my kids seem to spend all their time with their friends, they're always so 'busy,' they hardly ever just stop and enjoy each others' company.

It's moments like these when we are happy to be observers. A hidden gem is getting to enjoy their friendships and learn what is going on in their lives. That's what we always wanted in family time. Sometimes new friends would join us, but the core group has remained the same.

There is no greater joy than a dozen teenagers who want to sit at your dining room table without their phones. Just kidding, actually it's watching them negotiate, rock/paper/scissors and wrestle for whose turn it is to sit on the floor during the show!

If you're wanting to know if you've really made it in the parenting world...

It's being added to a teen group Snapchat!

We all know they only added me so I can see when they all vote on what they want for dinner next week, but it still totally counts.

Now that I've made it to this hallowed ground, can someone please tell me how to get out of a group chat?

No, My Kids Aren’t “Entitled,” They’re Just Teenagers
The Sit: What to Do When You Need A Time-Out
The Time the Mean Girl Was Me (And How It Helped Me Teach My Kids Kindness)
advertisement

No, My Kids Aren’t “Entitled,” They’re Just Teenagers
The Sit: What to Do When You Need A Time-Out
The Time the Mean Girl Was Me (And How It Helped Me Teach My Kids Kindness)