What a White Pumpkin Means to Me

Published by Noelle Elliott on October 4, 2016 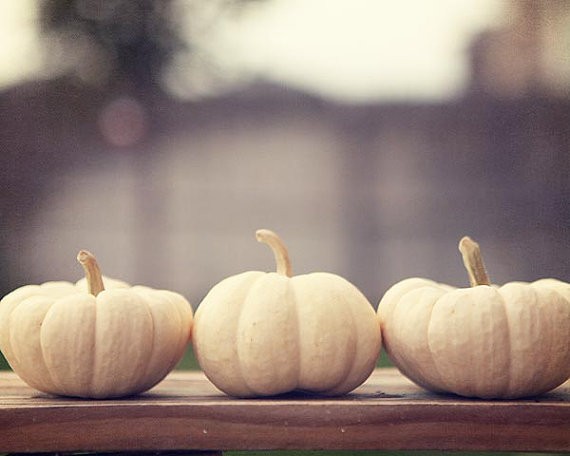 I love the Fall. I live in an area where the season change and the cooler temperatures are welcome. I squeezed every last drop out of the summer and don't get me wrong, I loved it. But there is something about Fall that focuses my attention inward. A natural compass that points back inside to reflect on things that I have neglected over the past several months.

Without even trying, we have made it a tradition to return to the same corn maze each year. Like a magnet, it pulls us in. It is a little farm house off of a less traveled road close to Michigan. As we pull our car onto the dirt driveway, we can see the same goats, and the same hokey wooden scarecrow directing us to the pumpkins. It's wonderfully cheesy and nostalgic at the same time. In my mind, I can see our boys. At first just one, only about 3 feet tall trying to grab the goat's face. The next year, there were two boys, and I nervously protected them. Sanitizing their little hands after they touched dirt. In the years to come, we would add two more sons and as if by magic, they all stand in the same spot eager to feed the goats we have named Betty. (All of them).

After the Betties have been properly fed, we collectively take off toward the corn maze. I have lost several children in that maze, but each year they eventually come out. This year, I'm less worried than previous years but more anxious than ever to get in the corn maze. 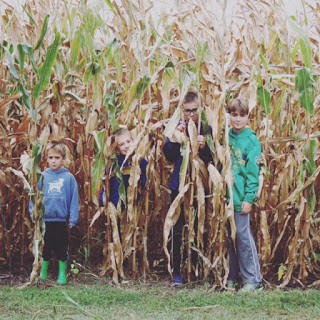 Perhaps it has something to do with growing up in Indiana, but the corn fields have a healing quality about them, especially in the Fall. I have always retreated to nature when I feel overwhelmed. When I was little, I would walk into the woods next to my house and within minutes feel peaceful. I spent hours trying to get lost, but never could. I always found my way out.

Before long my family of 6 is separated throughout the corn maze, and I can hear the laughter, screams and footsteps of the boys running along hitting the solid dirt. Don likes to hide and scare them around the corners. I usually just take my time in a soulful stroll, trying, sometimes successfully to get lost. Even though the corn is dead, it is still tall, and the wind blows through the stalks making a hushing sound, that has a natural calm to it. And just like the trees next to my childhood house had, the corn has power to untie the anxiety that has been in knots on my insides. Even though I can't see any of my family, I know they are there, even the ones we have lost.

Returning to this enormous field I feel taken care of. The tall stalks cover me in a big familiar hug. The soil remembers my step and rises to greet me.

October has always surprised me with the unexpected. Just when I have felt like we are settling into a new routine, a huge gust of wind rises and blows the dust into my eyes and I can't see without a little pain. We have several birthdays in October, but we also have had a few significant deaths.

But in that field at that very moment, I felt an overwhelming sense of wholeness. I already have everything I need. When I return home to all of my things, I'm overwhelmed with all the miscellaneous stuff that I have spent the majority of my time working for. All the warranties, contracts and appointments I have to keep. That is when I feel the knots tighten, sometimes in my stomach, sometimes around my neck. But, at that moment in the field however, I'm completely isolated from mainstream reality. If I lost all of my material possessions, I would be okay. I already have more than I need. I would walk home with only the clothes on my back and enough hands between Don and me to hold all that is dear to us.

Within moments, I heard the familiar footsteps of Oscar and without thinking I reached my hand out to have it met with his. Don jumped out and took a picture at that exact moment. It was as if someone knew I needed to capture that moment. A rare moment when I was happily lost in my environment, and my heart felt full. I can reflect on it and remember the feeling when I wasn't overwhelmed or consumed with clutter. Clutter of my mind and of possessions. 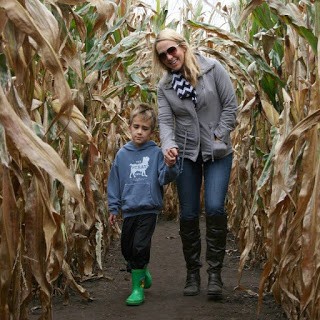 We exit the maze and like a symphony join in at just the right time together and make our way over to the pumpkins.

We get nine pumpkins. Each of the boys chooses one that they can lift, they collectively select one for Wally, our dog, one for me and one for Don which equals 7. The last two are for the two souls that never were born. The boys don't know, and maybe they never will. I'm not even sure that Don realizes the significance. People mourn in different ways. Some people remember the babies they miscarried with tattoos, some with footprints or sonogram photos. I find comfort in two little pumpkins every year.

Only one miscarriage happened in October, but this is the month I choose to remember both. The entire month, with two little pumpkins that only I know their significance.

When we returned home, I watched as the boys placed them on the front steps. I watched how they carefully put each of their prized pumpkin in the best possible spot along with Don's, Wally's and mine. And in the foreground, the two little white pumpkins that only I love.

I stood there and looked at the display. It is complete and whole and brings me more joy than pain. It is a perfect representation that makes me feel more than ever that I already have more than I need.

Grocery Store Pumpkins and Mediocre Costumes Mean My Kids Will Still Have a Happy Halloween
Losing My Temper: Mother of the Year Confesses All
Living in the Sub-points
advertisement

Grocery Store Pumpkins and Mediocre Costumes Mean My Kids Will Still Have a Happy Halloween
Losing My Temper: Mother of the Year Confesses All
Living in the Sub-points