When My Son's Anesthesiologist Used the R Word

Published by Tales of an Educated Debutante on March 3, 2016 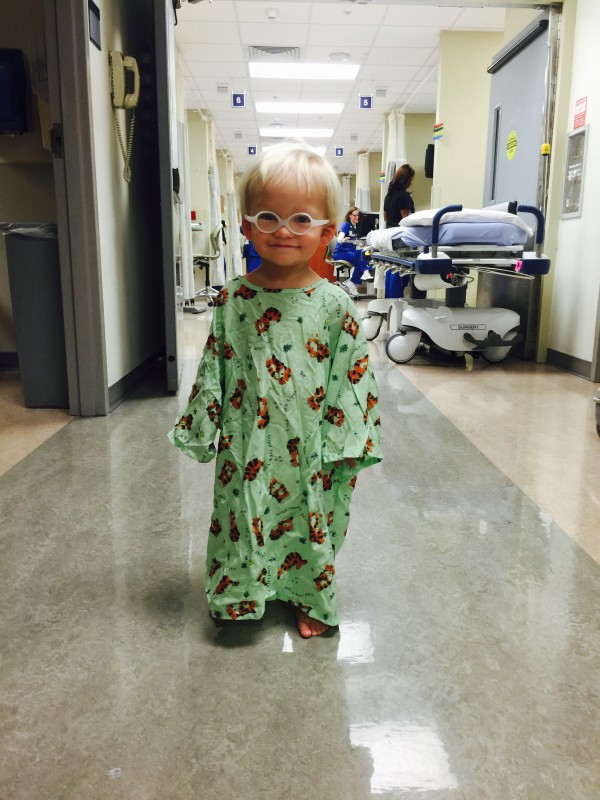 Hence the so. A signal to stop talking. Pause, think and button your lip. As my mother always reminded me, if I had nothing nice to say then I shouldn’t talk. Our household rule is even more specific: If what you say doesn’t make someone feel good, then do not say it. Roughly three-fourths of my household can repeat this family motto verbatim.
As someone quick to fight back, argue and stand firm in my beliefs, I greatly disappointed myself. I could not be trusted to protect my son when it came down to the wire. All the haggling with insurance companies, persuading speech therapists, insisting on tests from the pediatrician — and yet my labor had not produced enough fruit to throw at the doctor who asked me this question.
I was so caught off guard by the anesthesiologist who had come by prior to surgery to go over the details and what his role would be in the procedure. Easy enough, and my sweet son, Amos, in an ankle-length hospital gown had captured the heart of nearly every person in the unit, both medical staff and other patients. Rather than constrain him to the small room where we were to wait patiently, we traversed the three or four halls of the surgical center. It was a good morning for a mother and her son, up very early, neither of whom had been allowed a bite to eat or sip to drink. No coffee for me in the name of solidarity.
“So, is he retarded?” I could not have heard him right. It was offered as such a normal observation and part question that I felt surely I must have imagined it. But no, his next statement, even more frightening, disarmed me to the point of total silence. “I have a Down’s kid,” he went on to say casually. I could not think clearly enough to comprehend what I had just heard — not only at 6 in the morning, not only from a physician, well trained as an anesthesiologist, but worst of all, a fellow parent of a child with special needs. A son, just like mine. Not the chromosome linkage but a child like mine, who had certainly followed the same curve of development. Joyful yes, but taking time to smile, sit up, crawl, walk, follow directions and talk. Yes, we are still waiting on that milestone, unsure it will occur.
I feel the R-word is only acceptable to use on the rare occasion it is part of carefully-constructed, imperative education. The goal of bringing that language into conversation should only be so that we can ensure the next generation would never embrace this type of vocabulary. Never, ever say these hateful things, we diligently tell our children. Did I say children? This was not Doogie Howser, M.D., a child prodigy turned doctor. No, this doctor appeared to be in his mid-40s and had just used the R-word as you may expect one to converse about soccer.
I was not prepared for this assault. I say that as a mother whose job it is to teach her children to be considerate of others and about the dangerous way words really can hurt, despite childhood rhymes. My other job is to protect my children. That morning, I failed miserably at that important role. Although Amos was oblivious to the insult, I did hear and I did nothing. I have thought about that moment a hundred times since then, and each and every time it triggers the welling of tears and a throat lump.
Why did I do nothing? What could I have done differently? What do I wish I would have done? I don’t know, I really don’t. It is the closest I have ever felt to feeling like a victim, powerless and helpless to guard myself or my precious son. I wish I had screamed bloody murder, asked for a different anesthesiologist, tattled to my kind ENT or maybe taken him aside for a scalding lecture on the harmful power of words.
As I heal, I ponder what measures I can take to ensure that a physician and father of a child with special needs realizes the depth of hurt from his ever so casual comment. It’s an insult tattooed on my heart, a battle scar that will hopefully bring light from the darkness of hurtful words. I will be writing a letter to the practice. Knowing them, they will be quick to follow up, sincerely apologetic, and perhaps more physicians may benefit from my terrible experience.

When My Son’s Anesthesiologist Used the R-Word
"What's wrong with that boy?" 6 ways to talk to your kids about disabilities
Taking Care of Amos
advertisement

When My Son’s Anesthesiologist Used the R-Word
"What's wrong with that boy?" 6 ways to talk to your kids about disabilities
Taking Care of Amos