When you're terrified to grocery shop: Balancing fear and fun in motherhood after mass shootings

Published by christie cuthbert on September 1, 2019

As I walked into the grocery store the other day with my four boys, my heart raced. I immediately surveyed the store and exits, making mental plans for what I would do to protect them should someone start shooting. As I walked through produce, a woman raised her voice, shouting to her husband a few aisles away. She was only asking him to grab an extra avocado, but I jumped, thinking something terrible was about to happen.

I’m not alone in this newfound level of motherhood anxiety. Back-to-back shootings in my hometown of Gilroy, California, Dayton, Ohio, El Paso, Texas and now Midland/Odessa have everyone in our country on high alert. No longer being able to go to a food festival, out for drinks with friends, or shop for school supplies in the middle of the day without fearing that something horrible might happen, is our nation’s new normal.

It’s a scary world we live in right now, and for moms, it presents a whole new level of worry. Forget stressing about whether your child’s snacks are made with high fructose corn syrup, now your brain travels to terrifying places while you’re just venturing out to buy milk. How will I protect four kids? How will another mom with a child in a wheelchair or a double stroller escape safely? Where would we hide? Would my kids be quiet enough? Would it, could it happen here? The fear of the unknown is one of the biggest fears of all. 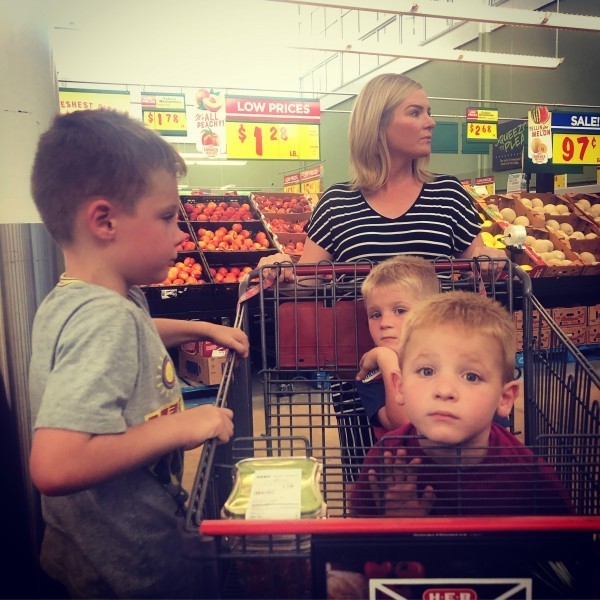 Nationally known psychotherapist Kelley Kitley, LCSW, says because of recent events, feelings of heightened anxiety are normal. “Embrace the fact that you may be hyper-vigilant right now, and that’s OK,” she said. “Until the initial shock of what’s happened wears off, it’s completely OK to get your groceries delivered or do whatever you need to feel comfortable. We also need to remind ourselves over time that we can’t live in fear or inside a bubble forever.”

Kitley, who is also a mother of four and works with many dealing with anxiety, says being aware and vigilant when out with your kids is not a bad thing.

“We have to remind ourselves that while our nation is traumatized by what’s happened, the probability of it happening to you is low,” she said. “Unfortunately, this new fear is our reality now. It’s normal to have this level of fear right after something has happened, but over time we need to resume to normal.”

Doing small things like having a plan in your mind in case something does happen can give some moms a sense of control, according to Kitley.

“I think because it continues to happen, even when we move forward and get comfortable again, something else is going to happen,” she said. “Ultimately we have no control, but if having a strategy in your mind or sitting closer to the exit helps you feel some sense of safety, then do it.”

Should extreme feelings of anxiety last more than a month or two, Kitley says to find a support group or someone to talk to.

“It’s completely normal for all of us to be on edge right now, but if the feelings don’t go away and begin to get in the way of you going about your everyday life, it’s time to seek help,” she said.

Another concern for moms is talking with their kids about the shootings. While I’ve personally tried to shield mine from what’s happening to diminish their own anxiety, Kitley says it’s important to have open dialogue and make them feel safe.

“I don’t think it’s ever too young to start the conversation,” she said. “If [your kids] don’t hear it from you, they’re going to hear about it at school and will likely have to do active shooter drills. The key is to constantly reassure them that everyone is doing everything they can to keep them safe. Describe in little detail and offer them questions to ask.” Often in times of extreme trauma, many are inspired to take action, and Kitley says for moms who lack a sense of control after what’s happened, being proactive and working toward change can help ease anxiety.

“I’ve had many moms come to me and ask, ‘What can we do? What will make us feel like change is possible?’” she said. “Getting involved politically or with an action group like Moms Demand Action isn’t for everyone, but for those who feel they can make a difference, it’s a great way to feel some sense of control with all that’s gone on.”

Just Because Something We Are Going Through is Considered "Normal" Doesn't Mean We Shouldn't Be Talk...
The #1 Question Moms Ask Themselves
How To Talk To Kids About Safety As We Head Back To School
advertisement

Just Because Something We Are Going Through is Considered "Normal" Doesn't Mean We Shouldn't Be Talk...
The #1 Question Moms Ask Themselves
How To Talk To Kids About Safety As We Head Back To School