Why the New Movie "A Quiet Place" Made Me Cry

Warning…significant spoilers ahead for the movie A Quiet Place, so if you haven’t seen it, go get a ticket today!

My husband and I decided to get a sitter and go see A Quiet Place last night. I had no clue what the movie was going to be about because my husband heard that it was best to see it without knowing too much. Of course I was up for any excuse to eat an entire bucket of popcorn, so off we went.

The movie is about a family that must be silent in order to survive. The evil creatures in the movie hunt and kill anything that makes sound. You can imagine the implications this has for a family with three children. This part of the plot alone made me sick. I’ve tried to keep three boys silent…it isn’t possible. My first thought was that our entire family would have met our demise in about two minutes. Anyway….

In the first few minutes of the movie, their youngest child is killed because the toy he is playing with makes a loud sound. I feel like the writers of the movie did a commendable job portraying the grief and guilt the rest of the family felt. As a mother who has lost a child (three in my case), I am obviously always super sensitive to child loss. I was pretty much mush from the beginning of the movie to the end, as the death of their son was a driving-force in the movie.

The couple conceives another baby, and ultimately the mom delivers a healthy baby boy. She goes to great lengths to keep the baby quiet and undetected by the creatures.

The scene that left me audibly sobbing in the theater occurred just after she delivered the baby. Her husband finally made it to her side, and she instantly started reliving the death of her son.

I’m sure the group of teenagers surrounding my husband and I in the theater probably thought I was ridiculous. I would guess that most people would have been thinking about the impending return of the murderous creatures, but not me. I sat there and choked back sobs because I had been where this woman in the movie was right then. 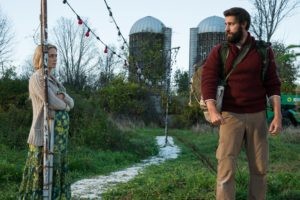 I so clearly remember looking down at my precious Gavin in the minutes after his birth. He was born two years after my triplet sons passed away. I had prayed every day of my pregnancy for Gavin to live, and when he came out breathing it was a surreal moment. I was overwhelmed with thankfulness and joy. However, I was also overcome by grief and longing for his older brothers. Just like the mom in the movie, I was blindsided by my feelings of failure to protect my children.

The character in the movie mentions that her hands were free at the time of her son’s death. She blamed herself for not holding him and keeping him safe. She agonized over what she could have done differently to save him. I too have done the same. For years I have recounted the events surrounding my sons’ death and tried to think of how I could have saved them. There is no greater pain I will survive in my life than knowing I just couldn’t make them live.

My husband and I talked on the way home about the way we “saw” the movie. We wondered if anyone else was sitting in that theater feeling the kind of gut-wrenching pain we were while watching the scene unfold onscreen. Were there any other people in that theater that are also parenting after loss? We’ll never know for sure. What we do know is that we aren’t alone. There will be thousands of parents who will sit in a theater and see this movie. Some, like us, will be taken back to the grief of losing their child. They will shed silent (or in my case not entirely silent) tears as they feel that pain deep inside.

I’ve come to understand that people like us are forever changed by the loss of our children. We will never be truly whole again. No matter the age of their child, or the circumstances surrounding their death, a parent becomes something entirely different after their loss.

I am so pleased that a Hollywood movie tackled this delicate situation with transparency and raw emotion. It is important that parents who are grieving the loss of their child know that they are not alone. Simply seeing a character go through this on screen made me feel a little more normal. Like maybe I’m not the only Mom in the world who still feels broken years after her children’s death. My grief is part of my story, and oddly enough I wouldn’t change it for the world. As long as I still feel the pain from time to time, my boys will live on in my heart.