Your Home is Your Bouncy Castle 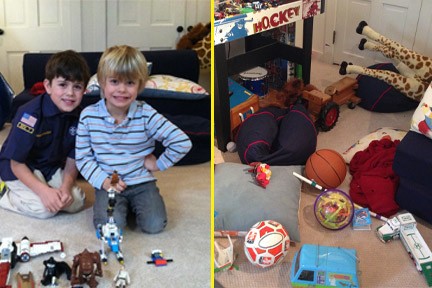 Have you ever experienced a moment of Zen at Toys R Us? Felt your cares melt away at Six Flags? Reconnected with your spouse at Chuck E Cheese? Me neither.

On the flipside, when have you visited a spa decorated in a Lego Duplo color scheme with ambient music by SpongeBob? Never. Yet so many parents, myself included, complain that we feel overwhelmed and can’t find time or space for ourselves while we willingly turn our homes into private toy stores and mini amusement parks in an attempt to please our children. A new trinket may bring a fleeting moment of contentment, but it also adds to the mounting chaos.

I once visited a self-professed stressed-out friend’s new home and as I took the tour I wondered who paid the mortgage: the parents or the kids? Her grandmother’s antique dining table was shoved against the wall to make way for a train table. A hot pink Barbie tent obscured the living room’s bay window. There was a crib mattress and a zoo’s worth of Pillow Pets all over the floor of the master bedroom.When I noticed steps going down to the lower level, I hoped, for my friend’s sake, that they led to a wine cellar with a Tuscan-themed tasting room. Nope. More toys. And this space was the most troubling, because it had become the land of misfit toys whose only purpose was taking up space!

Now I understand there are times when parents enter survival mode. When you come home from the hospital with newborn twins, it might make sense to turn the kitchen counter into a changing table. When you’re in the thick of it, just do what ya gotta do. No judgments. But when the baby starts sleeping through the night, when the flu has passed, when the lice are gone, it’s time to reclaim your home…. Or at least a room!

For me, the realization that my kids were dominating the house came one night after a long day of working, chauffeuring, cooking, laundering, refereeing, and Pokemoning. As I finally made my way toward the couch, I had to push aside a ride-on fire truck, a 4-wheeled bumblebee, a battery-powered Escalade and a rocking horse. My house doesn

I knew it was time to purge, and ultimately, I made a “no visible toys on the main floor after bedtime”

If you don’t have a playroom or a separate family room, don’t despair. Buy a couple of big baskets or better yet a storage ottoman. At the end the day, have the kids chuck all the parts and pieces inside and close the lid. Kids are happy to keep stuff in their rooms, too. If that’s not enough to corral all the toys, then it’s time to edit. Divide everything into two groups and put half in deep storage. When you hear, “Mom, I’m bored”, it’s time to swap Group A for Group B.

Abide by the “one-thing-in, one-thing-out” rule. For kids old enough to read, download the KidsTrade app, so they can trade among friends. Less-than-loved items are swapped for things that will hold their interest for more than five minutes simply because they’re “new”. The best part is that parents don’t have to do anything except click approve!

So, next time you’re about to shell out for another hunk of pricey plastic, consider the Christmas episode of Little House on the Prairie that you may remember. The one where Ma and Pa give both girls an orange, a doll made out of corn husks, a shiny penny and that’s it. As those grateful little girls took their scratchy dolls up to their sleeping loft, their parents were maxin’ and relaxin’. Why? Because that little house was Charles and Caroline’s castle and they did not allow visible toys on the main floor after bedtime!

Kelly Harrison is the CMO of KidsTrade and full-time mom to two young boys. Kelly loves staying on top of the latest tech and toy trends and learning from parents what they their kids to learn from the rapidly evolving world of apps and technology.