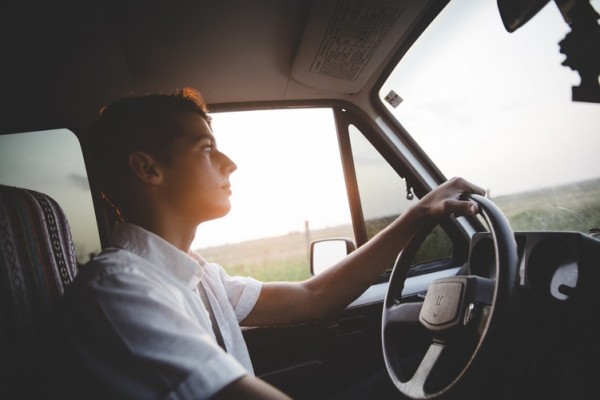 Come home safe. That’s what I find myself saying a lot these days. Come home safe. It’s my motto -- on repeat ever since I’ve been adjusting to our family’s new normal. This awkward new chapter in our life called Surviving the Terrifying Moments When Your Teenager Drives Away Until They Return -- and ways to avoid Life360 App addiction. Come home safe is the crutch phrase of our family’s new season. You use crutches when you’re hurt or weak and although it’s embarrassing to admit - my children growing older makes me anemic.

I say come home safe every morning before school as my son grabs his car keys and my daughter opens the back door that leads to the garage. The last words I say on the phone are, come home safe when my son calls from his job and lets me know he’s on his way. I feel the concern in my voice and I know my kids hear it too when I say come home safe on a Friday night after an overtime football game. It’s a crutch, but I’m imperfect.

My son turned 16 this year and I could tell you all the things I’ve been telling myself over and over -- that he’s respectful, responsible, makes good grades, has terrific friends -- all that warm, positive vibey stuff, but he’s driving solo more often and when he says goodbye - I always say, come home safe.

As if the words, come home safe will shield him and place a cover of protection over his car. Like an imaginary bubble that prevents other cars and objects from hitting him, or worse, if he hits someone else. I’m not sure why I’ve worked up in my mind that it would be worse if he caused the wreck. Fault or no fault, our car insurance payment will balloon but honestly, it isn’t about the money. The older I get the more I realize that if it can be fixed with money it’s not a problem. Don’t get me wrong - I don’t think money can fix everything - and we certainly struggle with not having enough of it, but if the problem can be fixed with money, it’s manageable. Here’s what’s fixable -- a totaled car, a damaged church sign, an extended hospital stay or months of physical therapy. All of those inconveniences are paid with time and money even if takes until you are 127 years old. A loved one, dead on the side of the road after a car accident cannot be fixed with money.

But like a fresh breeze, all these gory images are ushered from my brain and replaced with the endless loop of my energizing, rehearsed, positive words. My son is respectful, responsible and a good student. He has terrific friends and he’s conscientious. I added that last adjective since it has a comforting sound to it. Makes me feel better to think that he’s a conscientious driver. A person wishing to do what is right and to do it with care.

It was after a few months of him driving that I realized I was pouring a favorable outcome into him. Planting seeds of confidence in his subconscious. I say come home safe instead of don’t speed...don’t be reckless...don’t make quick turns or tailgate. I won’t parent using the negative because I chose not to parent that way when they were younger. I used words of affirmation as I spoke to him just like I’ve done his whole life, but now, in this season, my words are different. Instead of, come home safe, when they were younger I’d say, share what you have and when they did, “I’m proud of you.” As the kids grew, I’d say “care for one another or watch out for your sister.” When they entered middle school, “Be a leader” and then later, “Make good decisions" and "I believe in you.”

Come home safe is my way of adjusting to my teenagers when they flinch (ever so slightly) when I say I love you or when they shrug me off as I pat them on the shoulder. It stings a little when I can see him recoil when I adjust his collar. Our kids know they are loved. But, I’m honest enough to admit that they’re going through the “it’s so weird stage” when your mom says love you -- all the time -- out loud -- for like the whole world to hear. So I’ve learned to replace I love you with come home safe.

And come home safe is my way of saying that home will always be their safe place to land.

My name is Eleanor Howard. I've been married for as long as whatever year it is since I tied the knot with my husband, Danny in 2000. (Easy for me to remember!) We have two teenagers - a boy and a girl and I consider being their mom the greatest gift in the world. I am a Writer and a Bookkeeper. My brain is equally divided on right brain/left brain skills. I've worked in some form of Media & Communications almost my entire working career but Radio Broadcasting gave me roots. I've been an Executive Assistant to the VP of Radio and the right hand to many business owners from Uniforms Sales, Certified Public Accountant and Construction. My working experience is diverse but my true love is writing. I've finished my first novel and it is in the capable hands of its first editor.